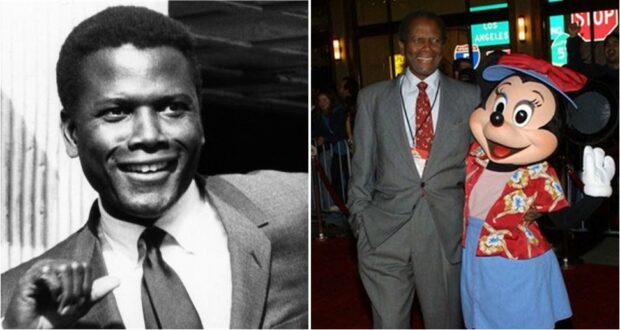 Sad news today as we have learned that the Oscar-winning actor and Hollywood’s first Black movie star, Sidney Poitier, has died at the age of 94.

Not only was actor Sidney Poitier known as Hollywood’s first black movie star, but he was also the first Black man to win the best actor Oscar in 1963 for his film role in Lilies of the Field. He was recognized for his thick Bahama island accent and prominent roles which during the 1950s and 1960s was a rare and challenging profession to climb for an African American man.

CNN reported that many of Poitier’s best-known films “explored racial tensions as Americans were grappling with social changes wrought by the civil rights movement. In 1967 alone, he appeared as a Philadelphia detective fighting bigotry in small-town Mississippi in “In the Heat of the Night” and a doctor who wins over his White fiancée’s skeptical parents in “Guess Who’s Coming to Dinner.”

Sidney Poitier’s connection to Disney was twofold with an appearance in Shoot to Kill. According to D23, Poitier was also named to the Disney board of directors on November 22, 1994, and remained on the board until March 19, 2003.

When talking to Oprah Winfrey in 2000, Poitier was quoted saying, “(Blacks) were so new in Hollywood. There was almost no frame of reference for us except as stereotypical, one-dimensional characters. I had in mind what was expected of me — not just what other Blacks expected but what my mother and father expected. And what I expected of myself.”

Poitier further went on to say, “It’s been an enormous responsibility and I accepted it, and I lived in a way that showed how I respected that responsibility. I had to. In order for others to come behind me, there were certain things I had to do.”

Clint Watson, the press secretary for the Prime Minister of the Bahamas, confirmed that Mr. Poitier died the evening on Thursday, January 6, 2022.

Our thoughts and deepest condolences are with the Poitier family.

2022-01-07
Jamie Sylvester
Previous: Want to Become a Scottish Lord or Lady Like Merida from ‘Brave’? This Unique Company Has the Easy Way
Next: Disney’s ‘Turning Red’ Pulled From Theaters to Go Straight to Disney+