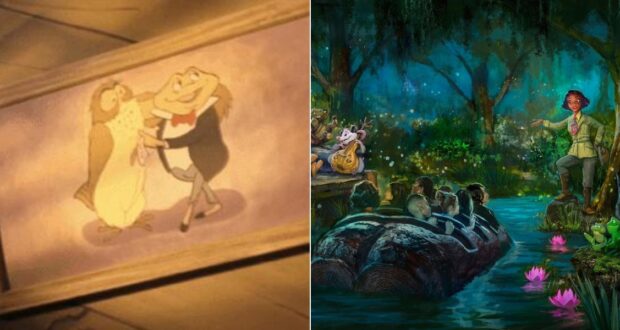 If you ride The Many Adventures of Winnie the Pooh at Magic Kingdom Park, and you look closely when you pass through Owl’s broken house, you will see a picture of Mr. Toad giving Owl the deed to the ride area. That is because Winnie the Pooh’s ride was originally Walt Disney World’s version of Mr. Toad’s Wild Ride, which is still active at Disneyland Park in Southern California. It is a subtle yet touching easter egg to a key ride and character in Disney history. Now that Splash Mountain has begun its transformation to become Tiana’s Bayou Adventure in both Frontierland and Critter Country, this writer is left wondering if any easter eggs alluding to the former ride will be added to the new scenes.

The easter eggs do not have to be obvious, either. For example, the animatronics in the final house scene on Seven Dwarfs Mine Train are reportedly from the original attraction Snow White’s Scary Adventures, and a Kylo Ren animatronic in Star Wars: Rise of the Resistance was supposedly the Wicked Witch of the West in the now-extinct Great Movie Ride at Disney’s Hollywood Studios. But, there have been reports that none of the Splash Mountain animatronics are going to be joined with Princess Tiana, Prince Naveen, Mama Odie, the jazz-loving alligator Louis, and all of their other friends. Personally, this writer can see at least one picture remaining in the queue that either loosely alludes to the ride or shows Princess Tiana with Br’er Rabbit, Br’er Fox, and Br’er Bear. Or, perhaps the best one would be some sort of signage in the ride pointing “off stage” with directions to The Laughin’ Place or Briar Patch.

At this time of this article’s initial publications, there are no official plans announced by Walt Disney Imagineering to put Splash Mountian easter eggs in Tiana’s Bayou Adventure. But there is a lot of time between now and late 2024, so who knows what news will be discovered over the next few months.

In the meantime, Disney’s Splash Mountain still lives on at Tokyo Disneyland. Click the link below to read more of that story. We at Disney Fanatic will continue to update our readers on this and other Disney Parks news and stories as more developments come to light.