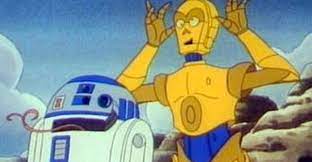 All 13 episodes of the Star Wars: Droids series is now streaming on Disney+ and it is one Star Wars fans need to watch.

The series originally ran on ABC from 1985 to 1986 but now joins Disney+ bringing even more amazing Star Wars content to the streaming network.

The series is described as, “Star Wars: Droids: The Adventures of R2-D2 and C-3PO is an animated television series that features the exploits of the droids C-3PO and R2-D2 who, over the course of their adventures, often find themselves in the company of new masters — and in new dangerous and difficult situations as a result. The series is set in 15 BBY — between the events depicted in Star Wars: Episode III Revenge of the Sith and Star Wars: Episode IV A New Hope.”

Make sure you check-out this series on Disney+ now.