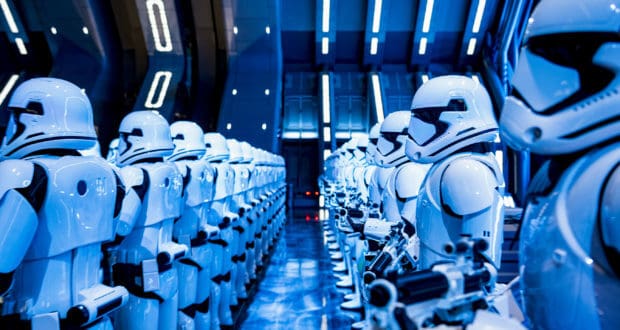 In late October we shared the news from Disney that changes were being made to the ever-so-popular Star Wars: Rise of Resistance virtual queue at Disney’s Hollywood Studios. It looks like the virtual queue distribution times are changing once again beginning December 20.

Distribution Times for the Virtual Queue: Guests with a valid ticket or Annual Pass and a Disney Park Pass Reservation for Disney’s Hollywood Studios will be able to request access to the virtual queue starting at 7:00 AM on the day of their reservation. This can be done before you leave your Disney Resort hotel or on your way to the park. Beginning on Sunday, December 20, the virtual queue will reopen daily at 1:00 PM for anyone inside Disney’s Hollywood Studios who wasn’t already able to join a boarding group earlier in the day.

Note: Guests must be inside Disney’s Hollywood Studios to access this second virtual queue opportunity, and access to a boarding group is subject to availability and not guaranteed.

Only Guests with a Disney Park Pass reservation for Disney’s Hollywood Studios will be able to experience Star Wars: Rise of the Resistance. When Park Hopper hours become available on January 1, 2021, Guests visiting from another theme park will not be able to request to join the virtual queue. We encourage these Guests to explore other areas of the park, including in Star Wars: Galaxy’s Edge where they may experience Millennium Falcon: Smugglers Run among other offerings.

As a refresher, the 7am time outside of Disney’s Hollywood Studios remains the same. But, beginning December 20, you’ll need to be ready to try to snag a virtual queue at 1pm instead of the previous 2pm while inside the park. Best of luck snagging a boarding group!