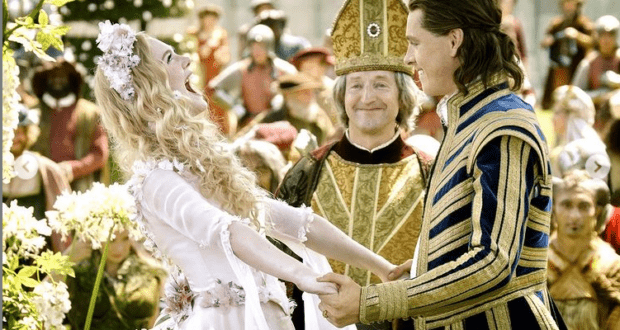 Take A Look Behind the Scenes of Princess Aurora’s Wedding in ‘Maleficent: Mistress of Evil’

Even though ‘Maleficent: Mistress of Evil’ premiered in theaters two years ago, its cast members have continued to treat fans to glimpses from life on set while filming the Disney blockbuster. Elle Fanning (the American actress who played Aurora (also known as Sleeping Beauty) in both Maleficent movies) has consistently shared wonderful images from behind the scenes, and now ‘Maleficent: Mistress of Evil’ director Joachim Rønning has continued the tradition by sharing some pictures from the highlight of the movie: Sleeping Beauty’s wedding! Joachim shared the pictures below with the following caption: “A great saying goes: a movie is never as good as the dailies – and never as bad as the first cut. Watching the first assembly of any movie is always a challenging experience. All your hopes and dreams forced into recalibration. But amongst the misery there’s always one scene that shines. A scene that, even at this early stage, moves you. On Maleficent, that scene was the wedding scene. Shot with a thousand extras sweating it out in 90 degrees over several days on the Pinewood backlot, the scene remained nearly untouched throughout the half year of editing. Also, having an @ellefanning always helps!”

While Disney princess weddings are always delightful (whether they’re in the bayou, on a boat, or in a wooded glen), the fact that Aurora’s wedding and wedding dress was something special is undeniable. Belle didn’t actually get married in her live-action ‘Beauty and the Beast’ movie, and Cinderella donned a more traditional style for her winter wedding, but Aurora’s whimsical, delicate dress is pure confection! 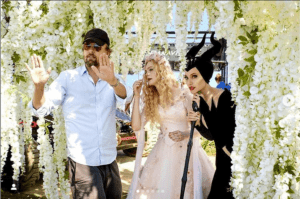 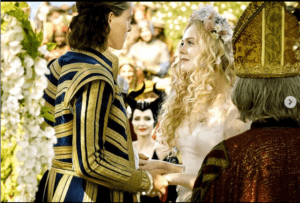 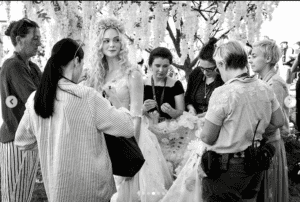 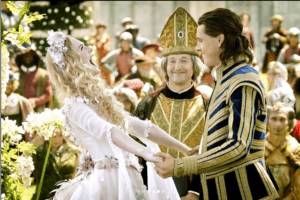 Elle shared Joachim’s Instagram post, saying that “this day was disney magic”, and she replied to him with the following comment: “Awww I love this! I will remember that day forever. Literally felt like my wedding day hahah!! so special.” 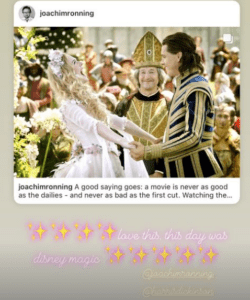 Elle was understandably ecstatic to be wearing “the Sleeping Beauty dress” at the time, saying in a behind-the-scenes video that “the wedding dress was so gorgeous! Flowers were on the train and also on my sleeve…I couldn’t walk, I couldn’t go anywhere without someone holding it up for me. [But it was still] a dream come true!” The “Disney princess’s grand wedding to Prince Philip” was a hit with audiences; according to Popsugar, “from the lush scenery to Aurora’s dreamy wedding dress, the scene truly looks like a fairytale celebration for the lovely couple”. One beautiful touch in addition to the wedding dress, Elle’s beauty, the scenery, and the music was also the fact that Aurora’s “gorgeous dress…changes colors during the ceremony in a sweet homage to the original animated film”. 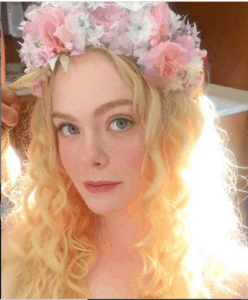 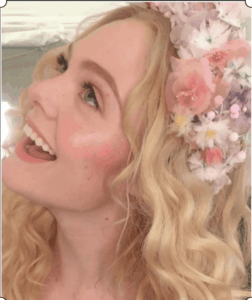 If you’d like to use Aurora and/or Elle Fanning as inspiration for your own Disney Fairy Tale Wedding, we have the exact makeup that was used on Elle to play Aurora here, straight from her makeup artist Erin Ayanian Monroe! And if you want wedding dress inspiration, we’ve got that too. Now it’s time for your own happily ever after!