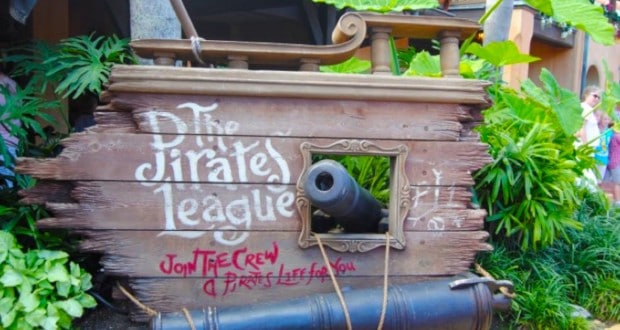 You are probably familiar with the classic Disney attraction, Pirates of the Caribbean. The original version at Disneyland, which opened in 1967, was the last attraction whose construction was overseen by Walt Disney himself; he died three months before it opened. The ride was replicated at Disney World’s Magic Kingdom in 1973. In the early 2000’s, this attraction inspired the Pirates of the Caribbean movies, starring Johnny Depp as Captain Jack Sparrow. The Disney Imagineers were then further inspired to develop The Pirate’s League for children ages 3 and up. Your kids will absolutely love this experience, where they get to join forces for a day with Captain Jack and his crew. Here are 5 reasons why you should book this for your next trip!

1) Captain Jack Sparrow wants you to join his crew! Your youngster will be christened with an Official Pirate Name from the leather-bound captain’s log. Then, you’ll make your way over to the Muster Station, where they will transform your young pirate into a living, breathing swashbuckler from days of old!

2) What’s yer pleasure, Matey? Choices abound for your boy or girl. They can be a First Mate, complete with a bandana, eyepatch, sword and shield, and even a temporary tattoo. There’s also an Empress Package that includes makeup, lip gloss, nail polish and a face gem. How about Jake from Jake and the Neverland Pirates? Or, your princess can be transformed into a beautiful mermaid, with makeup, a mermaid hairstyle, and a beautiful necklace.

3) Are you a real buccaneer? Captain Jack and his crew will prepare your pirate for adventures on the open ocean with tall tales of sunken ships and buried treasure, and teach buccaneer maneuvers with instruction from the Pirate Masters—yer no longer a landlubber, matie!

4) A secret surprise! Once your young adventurer is sworn in, they will make way through a hidden chamber where the Pirate Masters have a secret surprise. You’ll have to earn your stripes to find out what it is though—dead men tell no tales!

5) It’s time to show yer stuff! Finally, it’s time to regale the crowd as you march alongside your fearsome fellow seadogs in the Parade of Pirates in Adventureland! Do you have what it takes?

*Tip: Reservations for The Pirates League can be made up to 180 days in advance. To book, call (407) WDW-STYLE.