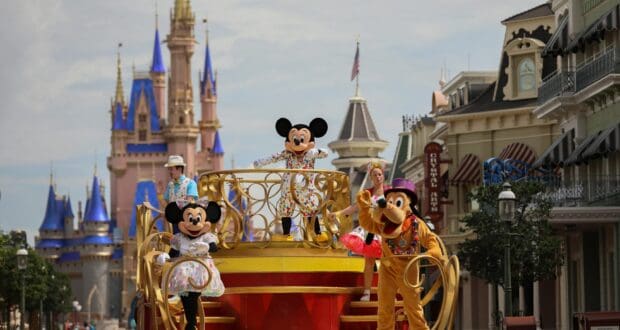 The Reopening of Magic Kingdom: 10 Things You Must Know Before Visiting

The Magic Kingdom is open once again, and we know you can’t wait to go. After all, we’ve been without this wonderful place for several months now, and we all need a little Disney magic in our lives. That said, there are things you need to know before you head back into Magic Kingdom. Many changes have been made, and things will look and feel a little different. Knowing what to expect will help you prepare practically, mentally, and emotionally so you can have what you need, go in with a plan, and avoid the disappointment that could happen because certain things aren’t available. So without further ado, we give you 10 things you must know before visiting Magic Kingdom.

The first item on our list is a big one: Yes, masks are required in Magic Kingdom. This is actually true for all Walt Disney World parks and resorts right now, and it is strictly enforced in all areas.

There are three exceptions to this rule:

Honestly, wearing a mask all day in Disney World is not as bad as you might think. For those who do need a break from their mask, there are the Relaxation Stations we just mentioned. These stations provide spaced seating, allowing guests to sit far away from another while they remove their masks and take a breather. In the Magic Kingdom there are three Mask Relaxation Stations. They are found in the following locations:

Besides masks, there are some changes you’ll notice before ever even entering the park. For instance, each park has established a new set of entry procedures to be conducted at the usual security checkpoints. For those visiting the Magic Kingdom, these new procedures will happen at the Transportation and Ticket Center, at a resort hotel, or just before the park entry point, depending on where you’re coming from. No matter which security checkpoint you go through, you can expect a few things to happen.

The whole process is surprisingly smooth and quick, but if you’re concerned, you could always arrive a few minutes earlier to be safe.

4. Cleaning Delays and Distancing on Rides

Rides are being cleaned after every few sets of guests. This, in combination with the social distancing protocols requiring certain rows and seats to be left empty, helps prevent germs spreading from person to person. (Of course, masks must be worn on rides too.) Oddly, these things don’t seem to be causing any kind of huge buildup. In fact, lines have been much shorter than usual.

5. No FastPass, but Short Wait Times

Currently, there are no FastPasses available in Disney World. You might think this would mean being forced to wait in incredibly long lines. The crazy thing is, as we mentioned before, lines haven’t been very long. This is true in Magic Kingdom as well as the other three parks. Popular rides such as Seven Dwarfs Mine Train and Splash Mountain consistently have wait times under 45 minutes, and many people are saying the lines move faster than advertised. We think there are two factors at play here. The first is lower crowds. The pandemic seems to be keeping crowds away, and even if huge swarms of people wanted to visit Magic Kingdom, they wouldn’t be able to because of Disney’s capacity limits. On top of that, the fact that no FastPasses are available means that the standby line can move continuously, something that is almost certainly playing a part in shorter wait times.

It is important that people be aware of the fact that a few Magic Kingdom attractions are still closed. All of the attractions that remain closed would be nearly impossible to run while still maintaining special distancing. These include:

Sadly, there aren’t any parades or fireworks scheduled in the Magic Kingdom—or any of the Disney World parks—at this time. Why? Because these performances draw enormous crowds, something that makes social distancing nearly impossible. Still, this is a sad fact, and one that is sure to disappoint many. While there’s no great way to replace the fireworks shows, Disney has come up with an ingenious way of giving Disney guests a little taste of the traditional parade without drawing those big groups of people: unscheduled cavalcades. These cavalcades run at random throughout the day and feature a series of floats carrying favorite characters along the regular parade route. Because they don’t run at a scheduled time, people don’t gather to watch the cavalcades, and because they happen so often throughout the day, nobody feels the need to crowd around them. The characters in the cavalcades include the following:

In addition to the parade and fireworks, character meet-and-greets have also been called off for the time being. While this does make sense—kids aren’t exactly good at keeping their distance when their favorite princess enters the room—it is still extremely disappointing for some visitors. The cavalcades are once again helpful here, in that they allow guests to see characters and wave and interact from afar. In addition the cavalcades, Disney has also added a few other hands-off character experiences throughout Magic Kingdom:

A few tweaks have also been made when it comes to dining. Those eating at a table-service location can check in from their phone, removing the need to talk to a host or hostess. Meanwhile, people dining at quick-service eateries are encouraged (and sometimes even required) to use mobile ordering. The following locations require that guests use mobile ordering:

In addition to mobile check-in and mobile ordering, you might also notice that menus are a bit more limited at many locations. That said, there are still plenty of options throughout the park, so you shouldn’t have a problem feeding everyone in your group.

As you walk through Magic Kingdom, you’ll notice markings on the ground encouraging people to maintain distance from one another. If you’re a big shopper, you’ll want to pay extra attention to these markings. Bigger shops with multiple entryways (such as the Emporium on Main Street) will have a designated entrance and exit, as well as arrows directing the flow of traffic through the store. This helps avoid congestion in these smaller indoor spaces.