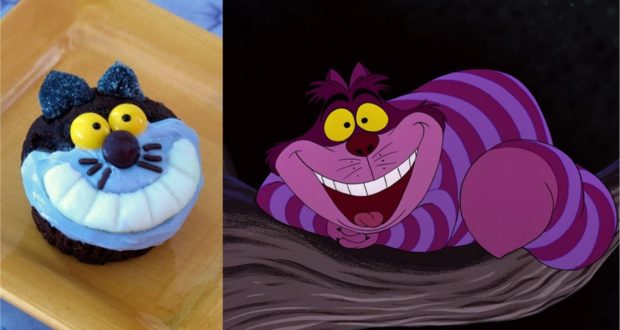 This Cheshire Cat Cupcake Recipe Will Leave You Grinning

Of all the characters Alice meets up with during her adventures in Wonderland, the Cheshire Cat is undoubtedly one of the most intriguing. This mischievous feline has a habit of materializing at will, first in the Duchess’s kitchen, then on the branch of a tree, and later in the Queen’s croquet court. Inspired by the crafty cat that bemuses Alice, this cupcake recipe from Family.Disney.com is all grins — and likely to disappear in the blink of an eye.

1. Frost half of the cupcake top, spreading the frosting in a wide arc that resembles a grin.

2. Flip over the sour apple gummy ring so the white side faces up. Cut a small section away from the top of the ring, as shown (an adult’s job).

4. Place the gummy teeth on the frosted portion of the cupcake, pressing down lightly to stick the candy in place.

5. Set the candies for the nose and eyes in place, centering them on the cupcake at the upper edge of the frosting. Top each eye with a small dot of black decorator’s gel or icing.

6. For whiskers, arrange a few chocolate sprinkles on both sides of the nose.

7. For the finishing touch, cut two matching triangles from the gumdrop and use dabs of frosting to stick them in place for the ears.

2020-07-02
Jamie Sylvester
Previous: 20 Experiences You Simply MUST Have at Walt Disney World in Your Lifetime
Next: This Minnie Mouse Cupcake Recipe Has Timeless Style