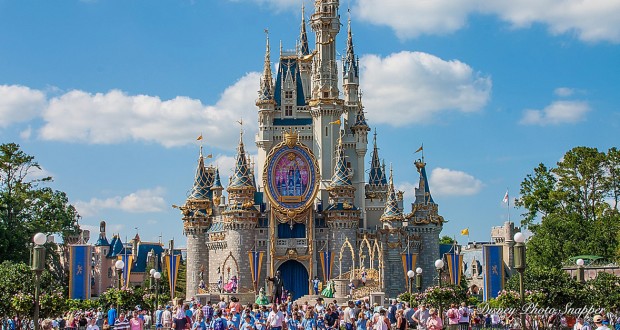 If I were given the choice of ANY 10 things to take home from Disney, I would choose the following:

10. All The Candy In Goofy’s Candy Co.—Downtown Disney(Soon to be Disney Springs)

Okay, so I’m a candy fanatic also, but how awesome would it be to have all the goodies that are in Goofy’s Candy Store in my kitchen pantry? Of course, they wouldn’t all fit, so I am perfectly willing to spread the special Goofy treats around to my family, friends, and neighbors. It would be amazing to have a Candy Block Party, serving a multitude of scrumptious Goofy sweet treats. There would be chocolate covered candies of all sorts, assorted flavored jelly beans(dispensers included), hundreds of different packaged Goofy specialties, Mickey Mouse shaped rice krispies treats, fudge, smores on a stick, lollipops of all shapes and sizes, and much, much more. Just thinking about all these luscious confectioneries makes me feel so happy!

I would like to bring home on of these charming surrey bikes. They are covered and have enough room for 4 passengers, two in the front seat, and two in the back, and everyone gets to pedal, with one person doing the steering and braking. It would be so nice to take a surrey ride around the neighborhood, or entertain the children by letting them take turns going for a ride. This is also a good and pleasant form of exercise; you get a good workout, while at the same time enjoying the fresh air in one of these fun and entertaining vehicles.

8. The Oversized Toys in and Around the Toy Story Midway Mania Attraction—Hollywood Studios

Having all those gigantic toys that are in and around the Toy Story Midway Mania attraction would be
magnificent! I can visualize a large room with these jumbo toys and games all around ready for children and their parents to enjoy. Just imagine playing with an extra large deck of cards, or barrel of monkeys. You could play a game of Sorry or Monopoly on enormous game boards with game pieces half your size. How about drawing a picture on a huge sketch pad with huge crayons? I would invite friends, family, and neighbors, or any one to come out and play (no age limit). After all, it was Walt Disney who commented: “There is not a lot of grown-up in a child, but there is a lot of child in a grown-up”.

7. A Clamshell from the “Journey of the Little Mermaid” Attraction—Fantasyland—Magic Kingdom

The ride vehicle in this attraction is designed to look like a giant, pink, clamshell, which can easily hold 2 or 3 small adults or young children. I would take one of these oversized clamshells, fit it with a padded cushion, install an overhead light, and have classic Disney music coming through speakers mounted on the inside. Special weights could be added to the bottom of the clamshell so it doesn’t tip over. How cool would that be? You could sit in it while listening to Disney melodies, reading, studying, or just relaxing. It would also become quite a conversation piece, one-of-a-kind!

6. One of the Viking Longboats from “Maelstrom” in the Norway Pavilion—Epcot—World Showcase

Even though “Maelstrom” has been retired to make room for the new “Frozen” attraction, I can’t help wondering what they are going to do with those Viking longboats. If they are not going to use them in the upcoming “Frozen” attraction, I want one. How totally awesome it would be to attach a sail to one of these boats, refurbish it with some extra paint, remove the rows of seats, add new padded cushions, basically do whatever necessary to insure its seaworthiness. After getting the all clear to sail, I’d test it out on a nearby lake. The looks on the faces of fellow boaters would be priceless, especially when they observe an authentic-looking Viking (furs & Viking horned helmet) steering this mighty longboat across this fearsome body of water!

It would be absolutely fabulous to go home from Disney World in possession of every Disney character costume. Can you imagine a dress-up Halloween party, and you arrive in an authentic Park costume like the Beast from “Beauty and the Beast”? All eyes would be on you. As a couple you could arrive as Mickey and Minnie, or Daisy and Donald Duck, Chip and Dale, etc. There are so many possibilities. Just think about all the Princess costumes to choose from: Snow White, Cinderella, Aurora, Ariele, Belle, Jasmine, Pocahontas, Mulan, Tiana, Rapunzel, Merida, and the newest Princess, Anna of Arendelle.

I, myself, would prefer to dress up as Chip or Dale. They always seem to be having so much fun wherever you find them, always clowning around and making people laugh. It would be so fantastic to become a Disney character and delight family and friends.

I love decorating my home at Christmas time, and the Osborne “Spectacle of Lights” extravaganza would truly set my house all aglow. I would definitely need an extra powerful generator to handle all the extra electricity. Of course, all the twinkling lights, lighted displays, toy soldiers, angels,a carousel, and a giant globe would be too much for one house, so I would invite my neighbors and friends to share in the joy of these radiant lights by taking some of the lights and decorating their homes also. Wow, our neighborhood would have the most spectacular light display in the state!

As a young pre-teen, I was a true tomboy—I loved hiking, riding my bicycle, especially in the rain, and my favorite pastime was climbing trees. I had the best view in the neighborhood when I reached the top. When I was first introduced to the Swiss Family Robinson Treehouse many years ago in Disneyland, way before Walt Disney World, I was thrilled to be climbing all those steps and seeing all the props from the movie. I would stop at each scene and imagine what it would be like to be living in this treehouse.

Of course I’d have to hire a professional architect to design any necessary changes to turn it into an actual live-in treehouse, with all the working gadgets and homemade devices that the Robinson Family utilized in everyday life. I wouldn’t live in it all the time, just on special occasions, or whenever the weather was perfect for outdoor recreation. I would finally have my own personal tree to climb whenever I wanted!

2. The Lifesize Statue of Walt Disney and Mickey Mouse—Magic Kingdom

I have admired Walter Elias Disney for many years, and have been to Disneyland and Walt Disney World often. I began my love of Disney in 1959, when we made our first trip to California, and to Disneyland. Later, we began traveling to Walt Disney World, and eventually began staying at a Disney Resort. All things Disney have always fascinated me, especially the life and career of Walt Disney, the original Imagineer, loving son and father, and faithful husband. I have read many books about him and his dreams of an amusement park where children and parents could enjoy the rides together. Throughout his early years, Walt had many setbacks and disappointments, but he never gave up on his dream, and how fortunate we are that he kept hoping and imagining until his vision of Disneyland became a reality, and eventually led to Walt Disney World, and all the other Disney Parks around the world. So, yes, I would love to display this statue in a specially designed outdoor gazebo, where any one who passes by would be able to enjoy this true-to-life image of Walt Disney and his partner, Mickey Mouse.

We own some property in the country on a ridge overlooking a wooded area, and Cinderella’s Castle would grace this area with such charm and beauty. I would have it remodeled on the inside to accommodate my immediate family and overnight guests. The special Cinderella Castle Suite would be available only for special occasions. What a magical dream come true, Cinderella’s Castle sitting on our property for everyone to see! I would make sure part of the remodel would change the huge dining hall into a smaller dining area, and design the rest of this area into a large ballroom. We could have parties, family get-togethers, and all sorts of celebrations. If you have Cinderella’s Castle in your back yard, you will definitely have a lot of guests stopping by, so I would lower the drawbridge, hang out the Welcome banner, and greet any one who chooses to come visit this enchanting symbol of Walt Disney’s dream and imagination!