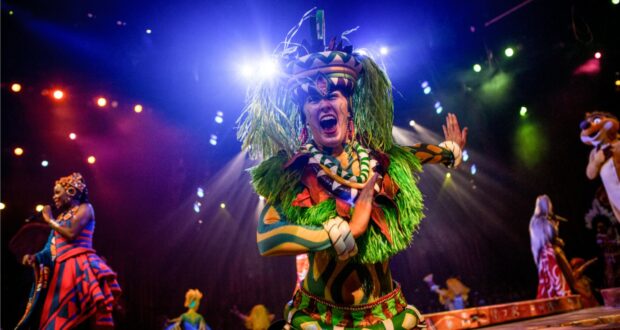 Despite a year of uncertainty and months of closure, Walt Disney World Resort remains hugely popular. Of course, some restrictions remain in place, but several attractions are returning and the Resort is still trending in many areas. Here are some of the top trending spots at Disney World right now…

8. A Celebration of Festival of the Lion King – Disney’s Animal Kingdom Park

Due to an increase in demand since its reopening, the Broadway-style show based on the animated classic The Lion King is now more accessible to Guests with new showtimes (up to 6 per day). The performance has also undergone some backstage and onstage modifications to suit the current climate, including things such as social distancing. And there’s no wonder this show has seen a rebirth in popularity – “everything the light touches” comes to life on stage, with puppets, dancers, and of course, in true Lion King style, heart-warming music.

With Character Greetings still temporarily unavailable due to social distancing measures, there are still a few ways to at least see popular characters while exploring the theme parks. Sure, it might not be quite the same, but Guests are understandably flocking to a number of locations to catch glimpses of their favorite Disney pals. For starters, there’s plenty of entertainment at Magic Kingdom Park, where you’ll see the likes of Mickey and Goofy, the Disney Princesses and Tinker Bell, while many other characters can also be found around EPCOT, Disney’s Animal Kingdom Park and Disney’s Hollywood Studios.

It might have something to do with the fact that the film starring Dwayne Johnson and Emily Blunt is just around the riverbend, but Jungle Cruise is suddenly even more popular. Sure, we think people are excited for yet another attraction-turned-movie, which involves a long-awaited return to the movie theater for many, but there’s also the element of total escapism: who wouldn’t want to explore the wild rivers of Asia, Africa and South America? A refurbishment has also been confirmed, with new upcoming ‘scenes’ and adventures for this vintage attraction.

While this melt-in-your-mouth emporium opened a few months ago, that’s nothing in Disney World, which makes this an all-new store. Is there anyone who doesn’t love M&M’S? We don’t think so, which is probably why this store has proven to be so trendy. There’s a lot of fun to be had inside too – there’s a plethora of themed gifts and, of course, actual M&M’S. You’ll find all the flavors imaginable in here, but we think it’s the social media-worthy photo ops with the M&M characters that has really put this piece of confectionary heaven on the map at Disney World.

There’s something about Disney World that allows a form of escapism like no other. Take Mickie & Minnie’s Runaway Railway – not only is it “2 ½ D”, which means it occupies that dazzling realm between 2D and 3D – it’s an experience that requires guests to enter the movie screen, making it a ride and a movie theater in one! Once you’re ‘inside’ the film, it’s a wacky, whimsical and wild adventure with the original Disney gang, on what can only be described as one of the most innovative attractions in the world.

Perhaps to no surprise, Star Wars: Galaxy’s Edge remains as popular as ever. It helps that the love for the franchise has never abated, with the faraway galaxy being a huge source of escapism for many. Now, the themed land provides a much-needed escape, while also giving guests a snapshot of life on Batuu. The remote trading outpost is home to two attractions – Star Wars: Rise of the Resistance and Millennium Falcon: Smugglers Run, and stores and eateries such as Droid Depot and Oga’s Cantina. And with the anticipation for Star Wars: Galactic Starcruiser also soaring, the Force is strong at Galaxy’s Edge…

Fans of James Cameron’s revolutionary sci-fi epic Avatar have been waiting forever for the first of four confirmed sequels to the 2009 film. Fortunately, Pandora – The World of Avatar seems to be keeping their appetite satisfied in the meantime. The themed land boasts bioluminescent fauna that brings it bursting to life by night, while one of its two attractions, Na’vi River Journey, has one of the most jaw-dropping animatronics in the world. This area is incredibly popular right now, which makes a lot of sense considering it feels even further away than a faraway galaxy.

With all other night-time experiences still under temporary closure (NOTE: Fireworks do resume early July for Magic Kingdom and EPCOT), the majestic centerpiece at Disney’s Animal Kingdom Park has become a hotspot for guests. When the sun has long fallen, magical fireflies awaken the tree from its slumber, and with it all the animal spirits that live deep inside. A breath-taking performance of beautiful imagery ensues, including animals and themes from The Lion King. Besides the fact it’s a surviving night-time show, the Tree of Life Awakenings is some much-needed calm, which might also explain its current popularity.

There are many other trending spots at Disney World right now. And with even more COVID-19 restrictions being lifted, and with the 50th anniversary celebrations starting in October, the resort is set to become even more popular than ever.