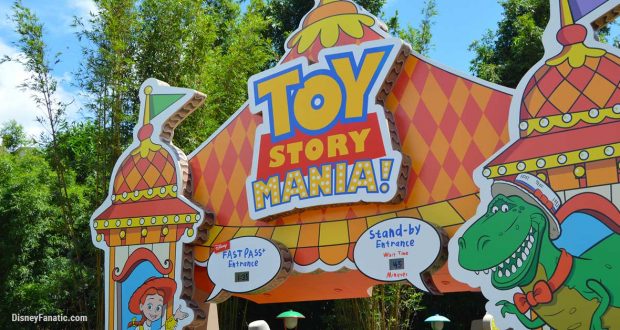 When Disney World fanatics are asked to describe their favorite rides and attractions, there are usually two groups of Guests. One group responds by saying “they’re all my favorites!” The other group of fanatics can tell you exactly which attractions are their most favorite and why. (Some go on to attempt to persuade you to feel the same!) And with so many different attractions to choose from, can you really choose the wrong one? We don’t think so either. But here are a couple of our favorites from each of the four Walt Disney World theme parks.

Okay, so it’s not the most thrilling attraction at the Walt Disney World Resort, but it definitely gets bonus points for staying power. It was in operation on Disney World’s opening day in October of 1971. Even today, it remains one of the most popular attractions in all of Walt Disney World with wait times of over 45 minutes on more crowded days in the parks. The rail-suspended dark ride gives Guests the feeling of flying. But instead of flying with Peter Pan and the Darling children, Guests fly throughout Neverland and see all the characters from the 1953 feature film, from Peter Pan and Wendy, to Tiger Lily, Captain Hook, Mr. Smee and even Tick Tock Crock.

You really can’t go wrong with any of the “mountains” at Magic Kingdom, but there’s something about a 5-story drop at a 45-degree angle that really gets your blood pumping, not to mention it was quite the feat for Disney Imagineering to develop. The open-air log flume ride is based on Disney’s Song of the South and features 950,000 gallons of water. Sit in the front if you want to be soaked! As fabulous as this ride is, it is soon to get a complete reimagining by Disney’s Imagineering. The new attraction will be based on Disney’s 2009 The Princess and the Frog. It will be the first Disney World attraction to feature Tiana and all her pals!

Have you ever wondered what it would be like to fly on the back of a mountain banshee like the Na’vi warriors from James Cameron’s Avatar? If you plan to be a Na’vi hunter, you’ll have to prove your skill in controlling your banshee and soaring atop him through the breathtaking and unique landscape of Pandora. This particular attraction features state-of-the-art ride technology that, among other things, allows you to “feel” the banshee breathing. One experience aboard these flying creatures, and you’ll be hooked!

In usual Disney fashion, this particular rapids attraction trumps ever other amusement park rapids ride. Not only is the attraction more spectacular than others, but it also tells a story of the damage that happens when illegal logging runs rampant in earth’s rain forests. There’s one significant drop, and the rapids themselves are the most thrilling part of the experience. If you’re a naturist, you’re in luck! The attraction is beautiful and features lush foliage and gorgeous views of the blue skies in central Florida.

1. The International Festival of the Holidays

While technically not considered an attraction, Epcot’s annual festivals are experiences not to be missed. November’s and December’s International Festival of the Holidays takes the proverbial cake—if you aren’t a grinch. The festival is a celebration of holidays traditions around the world. Guests savor the flavors of holiday treats, drinks and other fare from all over the world, and an incredibly special event, called the Candlelight Processional, takes place every evening and features a choir, festive holiday music and a reading of the Christmas story of Christ’s birth from the second chapter of Luke in the Bible. The story is read every evening during the Processional by a celebrity. Past celebrity guests have included Neil Patrick Harris, Ming-Na Wen, Isabella Rossellini, Pat Sajak, Gary Sinise, Steven Curtis Chapman, Marlee Matlin, Lisa Ling and many, many more. In response to the COVID-19 pandemic, the Processional was canceled for the 2020 season, and we’re hopeful that it will return soon, even if modifications have to be made.

At one time or another, the kid in all of us has probably pondered the idea of creating, building and driving our very own concept vehicle—you know the ones that haven’t yet made it to street-legal status, but are uber-safe, ultra-sleek and of course, faster than fast! Epcot’s Test Track attraction affords Guests just such an opportunity. Sponsored by Chevrolet, the attraction (now modified in response to COVID-19) allows Guests to board a concept car and try it out against the elements. It’s also the fastest attraction in the parks; Guests race on the track at 65 miles per hour, hitting curves that bank at 50-degree angles. Thrilling for sure! Don’t miss it!

1. Star Wars: Rise of the Resistance

This attraction left me speechless, absolutely speechless, but alas, I’m a writer, so I’ve got to try to find the words to describe the amazing experience that is Rise of the Resistance. (And no, I’m not a huge Star Wars fan.) This attraction gives Guests the opportunity to accept a vital mission from the Resistance. Thrilling ride technology (including trackless ride vehicles), state-of-the-art audio animatronics, holograms and sudden drops meet life-sized AT-AT in this never-before-imagined unlike-any-other piece of Imagineering genius. And if you love Kylo Ren, you’ll be one of the happiest Guests on this attraction, which features the evil Ren in animatronic form several times throughout the experience. Do not miss this one!

This Toy Story-themed attraction invites Guests to shrink down to toy size and join Woody, Buzz, Jessie, Rex, Hamm and all of Andy’s toys for a 4D experience inside Andy’s bedroom. Five exciting games await you on the Midway—Hamm & Eggs, Rex & Trixie’s Dino Darts, Green Army Men Shoot Camp, Buzz Lightyear’s Flying Tossers and Woody’s Rootin’ Tootin’ Shootin’ Gallery. Grab your friends and family and buckle up for some rip-roaring fun in this attraction where everyone’s a winner!