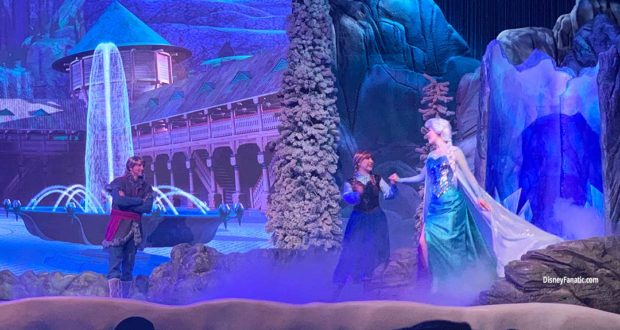 Many curtains on many stages haven’t risen in over a year. The theatrical world, including Walt Disney World, had to put a temporary hold on their beloved shows. Well, take heart Disney fans! Since Disney World’s reopening, entertainment and shows have slowly been returning safely. Even in this temporary normal, there are more options than you’d expect. Take note of the following entertainment that you can enjoy today. You’ll want a front seat for all of them!

1. The Voices of Liberty

This long-standing EPCOT favorite deserves its legion of fans. The Voices of Liberty, an acapella group outfitted in colonial garb, have been enchanting audiences with their vocals for years. While they normally perform inside the America Pavilion, they have been relocated to the America Gardens Theater. This outdoor space allows the singers to stand at a safe distance. And the ample seating gives spectators the same courtesy! Grab a spot and allow yourself to be swept away by the glorious music. If you’re lucky enough to be visiting soon, The Voices of Liberty are currently performing selections from popular Disney movies and composers. That sounds like the definition of a “can’t miss” show!

Breathtaking parades and traditional meet and greets may be suspended, but Disney has found a creative workaround. Currently, each park is featuring several character cavalcades. The ‘cavalcades’ are simply announced mini parades that occur throughout each day. Different cavalcades feature different characters including princesses, Mickey and friends, and many other familiar faces. And depending on the time of year, some are even holiday-themed! Again, while there are no showtimes listed, all you have to do is listen for the music. When magical tunes start to blast through the park speakers, be on the lookout for colorful floats and your favorite characters.

3. For the First Time in Forever: A Frozen Sing-Along Celebration

When it comes to Disney vacations, there is probably one hardcore Frozen fan in your party. In that case, you won’t want to miss the For the First Time in Forever: A Frozen Sing-Along Celebration. Another Hollywood Studios favorite, this show has returned and except for limited capacity, hasn’t changed very much. This sing-along is still narrated by wisecracking Arendelle historians. Characters from the movie still appear on stage. And last but not least, audience members still get to belt out their favorite tunes (albeit under a mask). We do recommend seeing the show early in the day. With limited seating, this former walk-on experience now requires a wait. But don’t despair, there are enough showtimes to guarantee you’ll see Elsa and Anna in their glory.

It’s time to gather up the Wilderness Explorers and head over to the Animal Kingdom! Fans of the previous Flights of Wonder and Up! A Great Bird Adventure Show will love this bird-centric offering. Feathered Friends in Flight takes place on the caravan stage and features a flock of birds and their animal trainers. Learn about the care required for each bird and the specific characteristics of each type. Be amazed at their elegance as they fly overhead and walk away with extra bird knowledge yourself. Praised by fans as one of the best animal-centered shows in the park, this is a must-do. Check out the times and avoid the hottest midday offering. You’ll be reminded of what makes the Animal Kingdom so special.

While the popular Cirque du Soleil show, La Nouba, has been closed in Disney Springs for some time, a magical replacement is in the works. In a collaboration between the Walt Disney Studios and the world-class acrobatics of Cirque du Soleil, this new creation celebrates the majesty of animation. Following the journey of a young girl who is left unfinished drawings from her father, her journey takes her on an adventure into the world of animation. As the name implies, the heroine will explore a whimsical world of acrobatics, inventive costumes, and sets as art jumps off the page before her very eyes. Although the opening date has not been announced, we have no doubt these shows will be sellouts in the future. Keep your eyes peeled.

6. The Festival of the Lion King

The most popular show in the Animal Kingdom has returned this summer and fans couldn’t be happier! While there are a few modifications for the safety of all parties, the experience is just as fantastic as ever. Nothing beats the impressive dancing, larger-than-life characters, and iconic soundtrack associated with this show. Just be prepared to wait in line. Capacity is limited and countless fans are eager to watch the show.

Even in a pandemic-cautious world, Disney is still delivering to guests of all ages. Make it a point to enjoy every available show as your schedule permits. After all, when the parks are firing on all cylinders again, you’ll be pressed for time. Stop and smell the metaphorical roses and enjoy the current entertainment. Even in a modified fashion, it is still magical.