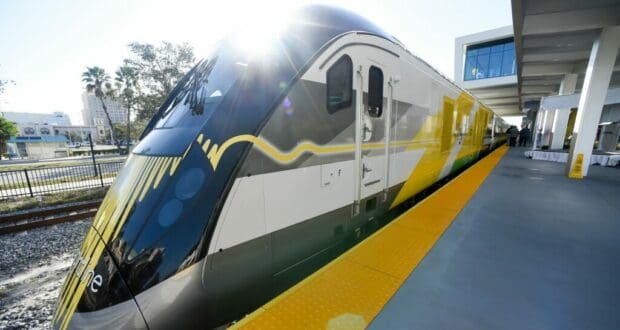 Well, we’re sorry to say Walt Disney World travelers, but the highly anticipated train route with Brightline that was planned to deliver guests from Orlando’s airport to Disney World and Tampa has been delayed indefinitely. The delay comes with no thanks to Universal Orlando Resort, as we previously shared they want the new train route to stop at Universal first.

As reported by OrlandoSentinel: “The Central Florida Expressway Authority agreed unanimously Tuesday (July 20) to delay indefinitely a decision over whether to allow Brightline Trains to build passenger rail beside the agency’s State Road 417 on the way from Orlando’s airport to Walt Disney World and Tampa. The vote came after nearly 3.5 hours of discussion dominated by a coordinated push from representatives of the International Drive tourism strip and the Hunter’s Creek residential community to deny access by the private rail company to the tolled S.R. 417 expressway. Such a denial would force Brightline to consider a significantly more costly route to the tourism strip.”

So, what’s Universal’s involvement? A consultant hired by Universal and International Drive merchants said the alternative route could cost as little as $294 million more than Brightline’s choice. On the other hand, a consultant hired by Brightline said they estimate the $1 billion cost for the preferred route would increase to $1.7 billion to take the International Drive route.

“We will put our money and our resources where our mouth is,” said John Sprouls, executive vice president and chief administrative officer for Universal Parks & Resorts, adding that his company would donate 17 acres for the rail corridor at the convention center. “We want to be part of the solution.”

Until the back and forth is figured out, it looks like an train trip to Walt Disney World is far into the future – if at all. What do you think? Should Brightline consider this Universal route? To read the full story, visit OrlandoSentinel.