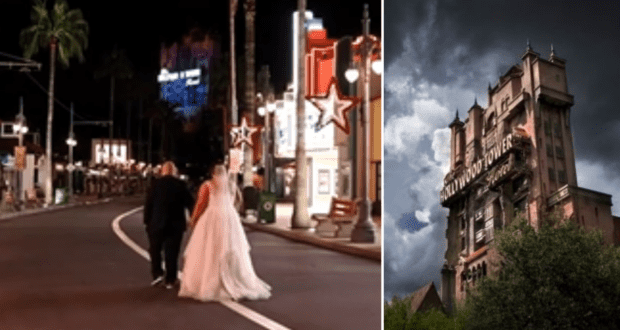 Video: ‘Drop-in’ to This Wedding at Disney World’s Tower of Terror

We have been enamored by videos of Disney fans tying the knot after hours in Disney theme parks, and the latest wedding video we simply had to share features a ceremony and reception in the courtyard outside of the Twilight Zone Tower of Terror at Disney’s Hollywood Studios. Of course, Cinderella Castle has been a popular venue for in-park wedding celebrations at Walt Disney World, but the look and theming of Fantasyland certainly does not fit the look every couple is going for. TikTok user @luandbubs hosted a Halloween wedding last October, with the Hollywood Tower Hotel as the backdrop for the event, and you simply must see how it went!

The event took place after hours, so while the wedding itself was held in the Tower of Terror courtyard, the couple and bridal party did stop in a couple of locations around the park for photos, while having the entire park to themselves. (If you are looking into a theme park wedding for yourself, you will need to plan the event either for before the park opens or after it closes.)

The photos taken on Sunset Boulevard with the Hollywood Tower Hotel in the background and with all the gorgeous lighting on this Hollywood Street would surely make for some incredible wedding photos. And of course, no Disney’s Hollywood Studios wedding would be complete without a shot in front of Mickey and Minnie’s Runaway Railway aka Grauman’s Chinese Theater.

Some of the unique touches at the wedding that were perfect for the Tower of Terror setting were bellhop hats for the bridesmaids (whose dresses seem to perfectly match the bellhop costumes worn by Cast Members at the attraction) as well as beautiful Halloween-inspired elements like black lace table clothes and skull accents.

During the reception, the event featured all of the traditional wedding elements like cutting the cake and dancing, as well as some moments unique to only this type of event at Walt Disney World. One of the most memorable parts of a Disney wedding can be the addition of performers and entertainment, and this wedding appears to have had magicians performing mesmerizing tricks for Guests as well as a caricature artist during the celebration.

This Tower of Terror wedding gave us some serious inspiration for a gorgeous wedding at Walt Disney World outside some of the more traditional venues, so if you happen to be planning a fall or Halloween-themed event for this year, make a note that the Tower of Terror courtyard should certainly be considered!