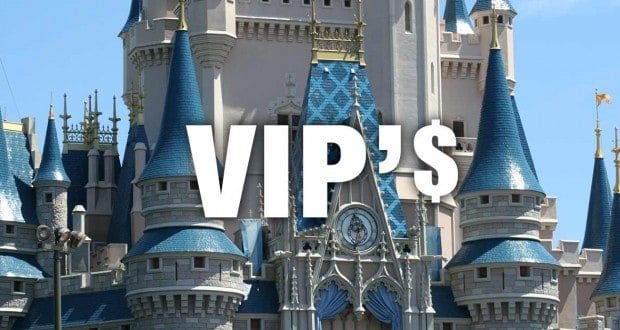 VIP’s Only? – Find Out How Some People Are Paying to Skip the Lines at Disney

How would you like to have an unlimited, all-day Fastpass, good for any ride in any Disney theme park for an entire day? Sound amazing? This uber-Fastpass comes in the form of a real live human being called a Disney VIP tour guide, and can be yours for the bargain price of $500 an hour!

All joking aside, there has been some controversy recently over the availability of this exclusive Disney perk, which basically boils down to paying to skip the lines. Some feel it is in opposition to the philosophy of Walt Disney, who wished for a theme park that would be a place financially accessible to all. Others believe this is no different than opportunities offered in many other theme parks around the world. Despite the differing opinions, Disney has recently expanded these tour services to include some less expensive options with some of the same perks. Before judging the “fairness” of this opportunity, let’s take a look at what is offered to guests partaking in these exclusive tour packages.

This is the original VIP tour offered by Disney. The package has been available for many years and offers a completely customized touring experience for your party. Guests are picked up by private transportation from resort hotel at any desired time. A VIP Tour Guide is assigned to your party and escorts you throughout one or multiple parks. Disney uses the term “efficient” to describe a VIP Tour guest’s ability to ride attractions. This is Disney-speak for jumping directly into the Fastpass lines on any attraction at any time. It also includes special reserved seating for stage shows, fireworks displays, and parades.

In speaking with Disney regarding this touring option, it seems that very little about your day needs to be predetermined, aside from the pick-up time and the length of the tour. You may use the allotted time however you wish. If you’d like to ride Space Mountain eight times in a row, you can. If you want to ride every ride in Hollywood Studios, you can. If you’d like to get on your favorite three rides in each of the four parks, and then take in Wishes at the Magic Kingdom, you can. This is the most flexible and customized VIP touring option that Disney has to offer.

The pricing for this ranges between $360 and $500 per hour, depending on the season. This touring option has a minimum duration of six-hours, and one tour guide can accommodate up to 10 people. The pricing listed above is for the Premium VIP Tour only. Park tickets must be purchased for each member of your party. I’m told by Disney employees that it is not uncommon for two families traveling together to split the cost of this touring option.

The Ultimate Series of Tours

This tour series was launched in mid-2014. These tours have a preset schedule and list of attractions, and are priced per person rather than per hour. There are currently three tour options available. They are “The Ultimate Day of Thrills”, “The Ultimate Day for Young Families”, and “The Ultimate Day at Epcot Food & Wine Festival”.

The Ultimate Day of Thrills VIP Tour and The Ultimate Day for Young Families VIP Tour begin on select days in the Magic Kingdom at 8:15 am. The seven hour days consist of “expedited” entrance to many of Disney’s most popular attractions while you are accompanied by a VIP Tour Guide. The Day of Thrills includes some of Disney’s most exhilarating rides, including Big Thunder Mountain Railroad, Rock ‘n’ Roller Coaster, and Expedition Everest. The Day for Young Families emphasizes family-friendly attractions and shows, including Peter Pan’s Flight, Toy Story Mania, and special reserved seating for the Festival of the Lion King stage show. Lunch at Whispering Canyon Café is included in the $299 per person price tag during both tours. Park admission is not included in that price, so a separate valid park hopper ticket is required for each person aged three and over.

Seasonally, Disney is offering an “Ultimate Day at Epcot Food and Wine Festival” Tour. This tour, available on select days to guests 21 and up, includes the best of everything Epcot has to offer plus the added bonus of delectable fare from Food and Wine Festival. The day begins in the VIP Lounge at the Festival Center, followed by “expedited” admission to Soarin’, Test Track, Spaceship Earth, and The Seas with Nemo & Friends. A six-course tapas style lunch with accompanying adult beverages is provided. Guest are then treated to a backstage tour of Living with the Land, followed by another round of tasty treats from the Food and Wine Festival. The day ends with VIP seating for the Eat to the Beat Concert Series and Illuminations. The cost is $399 per person, and requires separate admission to Epcot.

If you have a smaller family of three or four, these prescheduled tours priced per person may offer you some savings over the per hour tours. Unlike the Premium VIP Tour, you will not be picked up at your hotel, but it does offer private park to park transportation. The Ultimate Series Tours obviously do not offer the same kind of flexibility as the Premium Tours, but if the specific itineraries look appealing to you, it might be a way to access the benefits of having a VIP Tour Guide for less money. For a true Disney enthusiast, a day with one of these tour guides is worth its weight in gold. They aren’t just human Fastpasses. They are true experts in all things Disney and will offer a wealth of information about the history of Disney and other points of interest.

What are your feelings about people paying to skip the lines at Disney? Would you be interested in these tours if you could afford them? Leave us a comment!