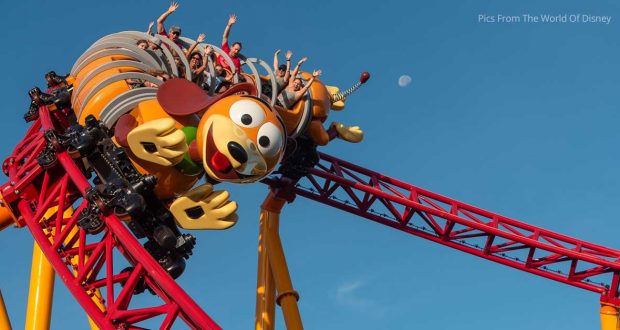 Walt Disney World Attractions Your Kids Will Go Crazy Over

Walt Disney World in Florida opened its doors on October 1, 1971 and is fast approaching its 50thGolden Anniversary.  Since its opening, Disney World has welcomed over 52 million visitors, added many new and exciting rides and attractions, opened several Disney-themed Resort Hotels, completed the “New Fantasyland” expansion, and is now in the process of renovating and expanding Disney Springs, formerly Downtown Disney.  In addition to all of these changes, Walt Disney World has embarked on another phase of expansion and renewal with the addition of two new Disney-themed Resort Hotels, Toy Story Land, Star Wars, Galaxy’s Edge, spectacular rides and attractions, and so much more, most to be completed by 2021 in celebration of 50 years of being the “most magical place on earth”.

This latest addition to Disney World is fast becoming one of the favorite family-friendly roller coasters.   The ride vehicle is designed to look like an oversized version of the “Slinky Dog” toy from the Disney “Toy Story” full length computer-animated feature films.  There are lots of turns, dips, and hills, but no loops or high-speed curves, yet parents and children alike can be heard screaming with pure joy as they round every curve.

Join Br’er Rabbit, Br’er Bear, Br’er Rox and lots of other forest critters for a gentle swaying ride in a log floating down a long winding flume.  There are a couple of small drops, and one gigantic drop at the end of the ride.  As you meander through Br’er Rabbit’s favorite place to be, his laughing place, you will be entertained by so many different forest animals singing, dancing, and having a jolly good time.  It’s a family-friendly ride and even the dynamic drop at the end brings excited screams and laughter as everyone ducks the big splash at the end of the drop.

There’s a lot to be said about attractions like this one.  It may not be a jolting, high-speed, hair-raising roller coaster, but it nevertheless brings smiles and laughter to everyone who rides it.  Each vehicle holds four guests, and the fun begins right away, as riders are taken into the world of carnival shooting gallery games, with 4-D special effects as each rider uses their pull-string spring-action shooters to toss virtual baseballs at plates, virtual darts at balloons, virtual rings on Aliens, and virtual hardboiled eggs at farm animals.  It’s so much fun for everyone, no matter what age, and at the end, the scores are tallied and guests can see who had the best score.  A great time is had by all. 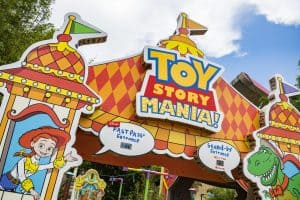 The world of Arendelle, home of Princesses Anna and Elsa, Kristoff, Olaf, and Sven, comes to life on this indoor boat ride.  Guests will feel as though they have entered this frozen land, based on the award-winning Disney full-length 3-D computer-animated film, “Frozen”.  The atmosphere, audio-animatronics, and award-winning music makes this attraction very popular, regardless of age.  It’s filled with humor, drama, beauty, and gives guest a warm, toasty feeling, even in the midst of such a “Frozen” environment.  Watch out for a few surprises along the way.

Based on the iconic, award-winning Disney full-length animated movie, “Snow White and the Seven Dwarfs”, this family-friendly outside/inside roller coaster is one of the most popular attractions in the Magic Kingdom. Guests step into oversized mine cars, which swing and sway as they move along the track taking them on a fast-moving journey, slowing only to enter a diamond mine filled with sparkling gems of all shapes and sizes.  As you travel through the mine, you get a view of the seven dwarfs digging and singing their favorite “Heigh-Ho” song.  Many guests are known to join in and sing along.  Once out of the mine the cars speed up with sudden dips and sharp curves, slowly arriving at the dwarfs’ cottage where riders can look through the windows and watch as Snow White and the seven dwarfs sing and dance to a lively tune, while the wicked witch looks through an outside window. Of course, we all know what became of her.

Climb on board this runaway mine train for the “wildest ride in the wilderness”!  Hang on tight for a twisting, turning, outrageous ride with sudden dips and sharp curves around Big Thunder Mountain.  Then your train enters an abandoned mine shaft, where it slowly climbs a steep hill, and just before you top the hill, there is a loud explosion and above you timbers begin to shake, and it appears all is lost.  Luckily, the train escapes the cave-in, and your train ride continues on its wild rampage until it finally slows down long enough for riders to disembark before whisking a new group of passengers on another outrageous ride through the wilderness. 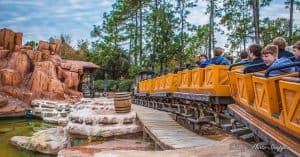 Embark on a hair-raising, high-speed journey into deepest, darkest regions of outer space in a futuristic rocket ship.  It’s an exhilarating dark, indoor roller coaster.  The speed, unexpected dips, sharp turns, and the fact that you can’t see what’s ahead makes this one of the more popular attractions in the Magic Kingdom. The special effects and unearthly music add to the thrill of this mind-blowing roller coaster.

On October 31, 1939, on this stormy Halloween night, a very strange event took place at the famous Hollywood Tower Hotel.  Four guests and a hotel bellhop stepped onto an elevator going up, when suddenly a bolt of lightning struck the hotel, and within a few seconds, all five people mysteriously vanished, never to be seen again. The hotel was forced to shut down and became a ghostly building, trapped in time, until now.  Visitors can now visit this infamous hotel and discover for themselves what may have happened on that strange and eventful evening many years ago.  Warning: be prepared for an elevator like no other.  One moment you are calmly sitting still, and in an instant you are experiencing free fall as your elevator plummets toward the bottom and just before crashing, you are swiftly yanked upward, only to fall once again.  This bizarre up and down activity continues for several minutes, then as quickly as it began, your freaky elevator ride is over. Warning:  Ride if you must, but expect the unexpected.

This indoor roller coaster is definitely not for the squeamish or faint of heart.  Your ride vehicle is an awesomely designed, shiny stretch limousine in which you will be riding on an electrifying journey with the spellbinding music by Aerosmith.  After you’re loaded into the limousine coaster, the shoulder bars are lowered, the countdown begins, and your limo accelerates from zero to 57mph in 2.7 seconds. Your are blasted onto an indoor fast track which will take you through 2 rollover loops and a rip-roaring corkscrew, all at lightning speed and in the dark.  Warning: Before you ride, read and heed all warning signs! 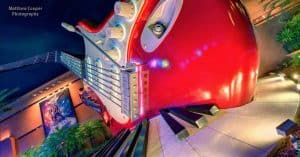 Disney imagineers have outdone themselves on the masterful theming, architecture, and landscaping, bringing to life a Tibetan Village at the base of a truly gorgeous representation of  the Himalayas and Mt. Everest.  The museum visitors walk through on the way to the ride is filled with authentic-looking mountain climbing gear, old photos of famous mountain climbers, and even tents which look as if they had been shredded by a wild animal with sharp claws.

The ride vehicle is designed to look like an old rickety railroad, but its looks are deceiving. The thrill factor on this roller coaster will blow you away.  The journey is filled with a forward, then backward, then forward again speeding train ride, including an encounter with the “legend of the forbidden Mountain, the frightening, not-so-mystical beast, the Yeti, whose appearance and earsplitting growl will leave your shaking.  The rest of the trip is a downward spiral in and around the mountain, as your train makes it way back to the base camp.  As with most of Disney’s thrill rides, guests can’t wait to ride again and again.

Yes, you and your children will go crazy over all of these rides, attractions, and many more. Walt Disney’s dream and vision of a future where parents and their children can enjoy “a day at the Park” together has come true, in so many different ways, and at so many Disney theme parks.  No matter which Disney theme park you visit, you will experience the spirit and philosophy of this great visionary, Walter Elias Disney.