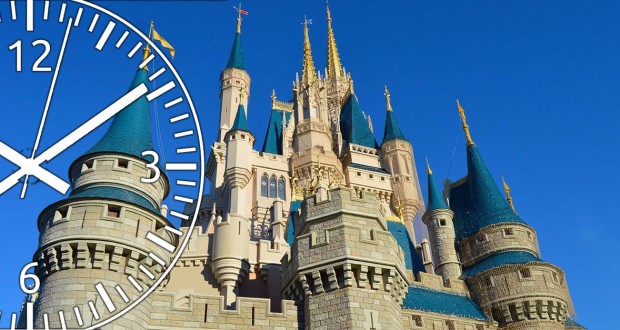 Walt Disney World Park Hours 101 – Everything You Need To Know

One of the most important things you need to do before your Walt Disney World vacation is check the scheduled park hours. Preliminary operating hours can be found as early as six months in advance. It’s also important to periodically check park hours as your vacation approaches, in case of changes or additions. Understanding how Disney park hours work will help you as you plan your dining reservations and plan your park days. Here are 10 helpful tips to understanding Disney World park hours.

While there are several websites that post Disney park hours, the best idea is to go directly to the source. However, if you are an uber-planner like me, you might want this information more than six months in advance, especially when planning hard-to-get dining reservations like Be Our Guest restaurant or character meals. A quick google search will help you find historical park hours, so you can have a general idea of what to expect on your vacation. If something changes, you can always make minor adjustments to your schedule.

Almost every day, especially during busy times, one or more of the four Disney World theme parks will either open one hour early or stay open two hours late for those guests staying at a Disney resort. Also included are Shades of Green, Walt Disney World Swan & Dolphin Resorts and the Hilton Resort at Downtown Disney. As most guests are reluctant to wake up early on vacation, the morning Extra Magic Hour (typically 8:00-9:00 am) can be very useful. Although not everything is open during that early hour, many attractions are, including several of the most popular rides. Evening Extra Magic hours on the other hand, tend to be quite busy. However, if you can make it to the very end, the last 30-60 minutes (sometimes well past midnight) can offer very short lines.

*Bonus tip: If you don’t plan on using Extra Magic Hours, stay away from that particular park, as it will be more crowded than normal.

For many guests, shopping for Disney souvenirs is as much fun as the attractions or restaurants. Are you aware that some of the shops stay open after official closing time? The shops on Main Street USA in the Magic Kingdom and Hollywood Boulevard in Disney Hollywood Studios stay open 30-60 minutes after park closing, giving you even more time to find that perfect souvenir!

This tip is top secret, so keep it under your Goofy hat! In several of the parks, you can schedule a character breakfast before park opening. This will allow you to enter the park before the crowds, giving you a great opportunity to take unobstructed pictures of the park. Be aware, you will only have access to the area of the park that leads to your particular restaurant, and you’re supposed to keep moving, but it’s still a rare treat. Occasionally, a character or two will appear to give you a photo op. My family got a great picture with Minnie Mouse in front of the castle, just prior to our breakfast reservation. Character breakfasts that will allow you to enter the parks early include: Crystal Palace in the Magic Kingdom, Akershus in Epcot and Tusker House in Animal Kingdom.

This is arguably the most important piece of advice anyone can offer you. Arrive early at the park of your choosing, 30-60 minutes before official opening, depending on how busy the parks are. As mentioned earlier, most guests are reluctant to rise early on vacation. Following this advice will keep you ahead of the crowds for at least the first few hours of the day, resulting in shorter lines for your favorite attractions.

*Bonus tip: During the busy times (summer, holidays), the parks may open earlier than published hours, giving you an even greater advantage.

This tip works best for adults and older teens. During busy times of the year, nighttime shows and parades may be offered twice per evening. The second showing will always be less crowded (because it’s late in the evening), and you can experience shorter lines at the attractions during the earlier, more popular show/parade. These include the parades and Celebrate the Magic show at Magic Kingdom and Fantasmic at Disney Hollywood Studios.

Animal Kingdom used to close much earlier than the other parks. This was originally due to the fact that Animal Kingdom park uses live animals in many of their attractions. In the past few years, Disney Imagineers worked with animal care officials to plan exciting after-dark activities like Rivers Of Light.  This beautiful display of lights and colors is not one to be missed!

*Bonus tip: You can use your Animal Kingdom evening to visit Disney Springs, the boardwalk area, play mini-golf, enjoy a meal, “hop” to another park, or relax at your hotel.

If you go to Disney World in the fall, you need to know about two separate-ticket events that take place in the Magic Kingdom. In September and October, the Magic Kingdom celebrates Mickey’s Not-So-Scary Halloween Party and in November and December, Mickey’s Very Merry Christmas Party. These parties require a separate ticket, and run from 7:00 pm- midnight. What this means to day guests is that the Magic Kingdom closes at 7:00 pm.

*Bonus tip: You should try one or both of these parties, as they offer special shows, parades and character interaction.

Almost every night the Magic Kingdom hosts a nighttime projection show at Cinderella’s Castle.  On certain nights during the year approximately 30 minutes after the park closes, Disney surprises guests with a sweet way to say “Goodbye”. This “Kiss Goodnight” begins with a fanfare and the entire Main Street USA area comes alive with Disney music. You will hear “When You Wish Upon a Star” and a chorus of singers. At a certain point, a voice will talk to the guests and say,

“Ladies and gentlemen; boys and girls, on behalf of everyone here at the Magic Kingdom, we thank you for joining us today. We hope that your magical journey with us has created wonderful memories that will last a lifetime. Walt Disney said the Magic Kingdom is a world of imagination, hopes and dreams. In this timeless land of enchantment, magic and make-believe are reborn and fairy tales come true. The Magic Kingdom is a place for the young and young at heart; a special place where when you wish upon a star, your dreams really do come true. Until we see you again, have a safe trip home. Thank you and good night.”

Then Mickey’s voice is heard wishing his favorite park-goers a goodnight with his classic phrase, “So long everybody! See you real soon!”

If you are a Disney resort guest, bus/boat/monorail transportation begins well before park opening and up to 2 hours after final closing. You need not worry about Disney transportation; they’ll make sure you get where you need to go!