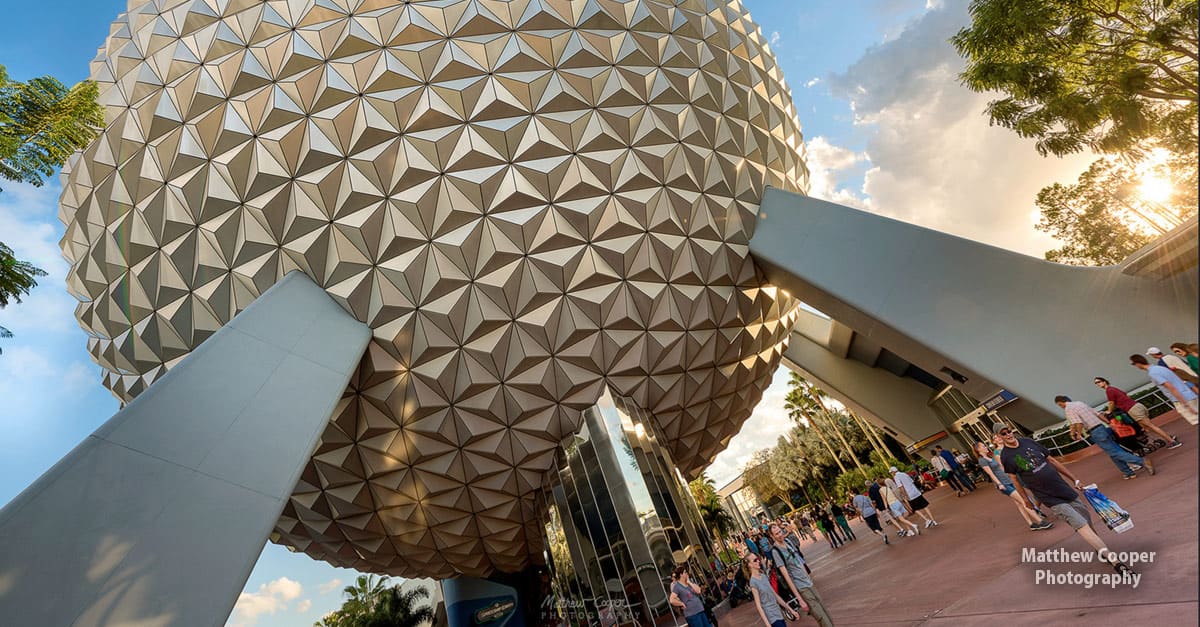 Walt Disney World’s second decade began and ended with a flourish of new rides, attractions, shops, restaurants, a new water park, Typhoon Lagoon, two new Disney Resorts, Disney’s Grand Floridian Resort and Spa and Disney’s Caribbean Beach Resort, plus the opening of two new theme parks, EPCOT and Disney’s MGM-Studios.  It was the beginning of renewal and change for this wondrous World of Disney, including the end of ticket books and the debut of multiple day Disney passports, and the annual passport.

On October 1, 1982, EPCOT (Experimental Prototype Community of Tomorrow) Center opened, including Future World and World Showcase.  While the Magic Kingdom’s centerpiece is Cinderella’s Castle, EPCOT’s centerpiece is a gigantic silver geosphere aptly named “Spaceship Earth”, located at the entrance to EPCOT and Future World. Inside this symbolic structure is a very popular slow moving ride which takes visitors backward through time highlighting the advancements of mankind in the area of communications, beginning with the drawings on the walls of cave dwellers to the innovations of today’s technology and tomorrow’s possibilities.  The audio animatronic scenes, mesmerizing musical scores and narration by famous journalists and celebrities make this one of the most visited attractions in all of Walt Disney World.

EPCOT’s World Showcase encircles the World Showcase Lagoon, featuring, at that time, pavilions from nine countries, namely, Canada, China, France, Germany, Italy, Japan, Mexico, United Kingdom, and the United States.  The Morocco and Norway pavilions would become a part of World showcase later in this decade. Each pavilion’s cast members are international recruits who are there to share their country’s history and cultural information while “living, learning, and earning” in America.

On May 1, 1989 Disney’s MGM Studios (later renamed Hollywood Studios) opened, and on opening day there were so many guests that Disney officials had to close the parking lot at 9:15am.  The centerpiece of MGM Studios was a replica of the Grauman’s Chinese Theater located in Hollywood, California, complete with a courtyard where famous celebrities would place their handprints in cement. Inside the theater was an attraction called, “The Great Movie Ride”, which took guests on a slow moving theater-style seating ride vehicle through memorable scenes from the greatest Hollywood movies. The audio animatronics technology used in this attraction captivated the audiences and made them a part of the action and a truly exciting Hollywood movie experience.  At that time Disney’s MGM Studios was a full fledged television and motion picture production facility, including a Back Lot Tour where guests enjoyed a tram car ride through the back lots of the Studio where the filming of shows and movies took place.  The tour included an informative look at the costuming department, and later in the tour a thrilling action sequence through “Catastrophe Canyon”.

New Rides and Attractions Opened in the 80s: