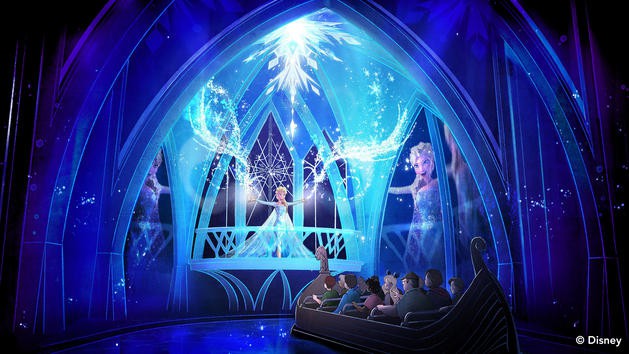 The new Frozen Ever Afterattraction built inside the Norway pavilion on the World Showcase opened to the public on June 21, 2016. It wins the #1 spot for attractions at EPCOT because it’s just so cool (no pun intended). It was constructed inside the same building that held the Maelstrom attraction from its ships’ maiden voyages on July 5, 1988 until its last day of operation on October 5, 2014—exactly 26 years and 3 months after it opened. At first, lots of Disney World fans were troubled by the closing of the Maelstromattraction, but Disney makes “change” bearable and that’s exactly what happened with this attraction. Many Disney fans agreed that the World Showcase was due some upgrades, and the Frozen Ever Afterattraction is the first of many changes coming to EPCOT.

In this attraction, Guests board a Norwegian vessel and take off on a boat tour of Arendelle. The track used in this attraction is the same one used in the Maelstromattraction, which means that fun drop is still a part of the ride! All the beloved characters from Frozen are part of the attraction, including Anna, Elsa, Olaf, Sven, Kristoff, Hans and even minor characters. Frozen Ever Afteralso highlights some of the newest audio-animatronic technology in use by Walt Disney Imagineering. The attraction is home to the first ever all-electric audio-animatronics, which are different from animatronics of an older technology. The older robots used either pneumatics or hydraulics to create movements. The new generation of animatronic robots’ movements are more fluid—not so “jerky.” Rear-projection technology is also used on the animatronics to make their facial expressions seem more lifelike. The original songwriters/composers Bobby Lopez and Kristen Anderson worked with Imagineers and revised some of the lyrics to the popular Frozensongs to be used as part of the attraction. Listen closely and see if you can hear the different lyrics.

Left 12 of 12 right
Next: 10 Travel Essentials to Pack for a Stay at a Walt Disney World Resort