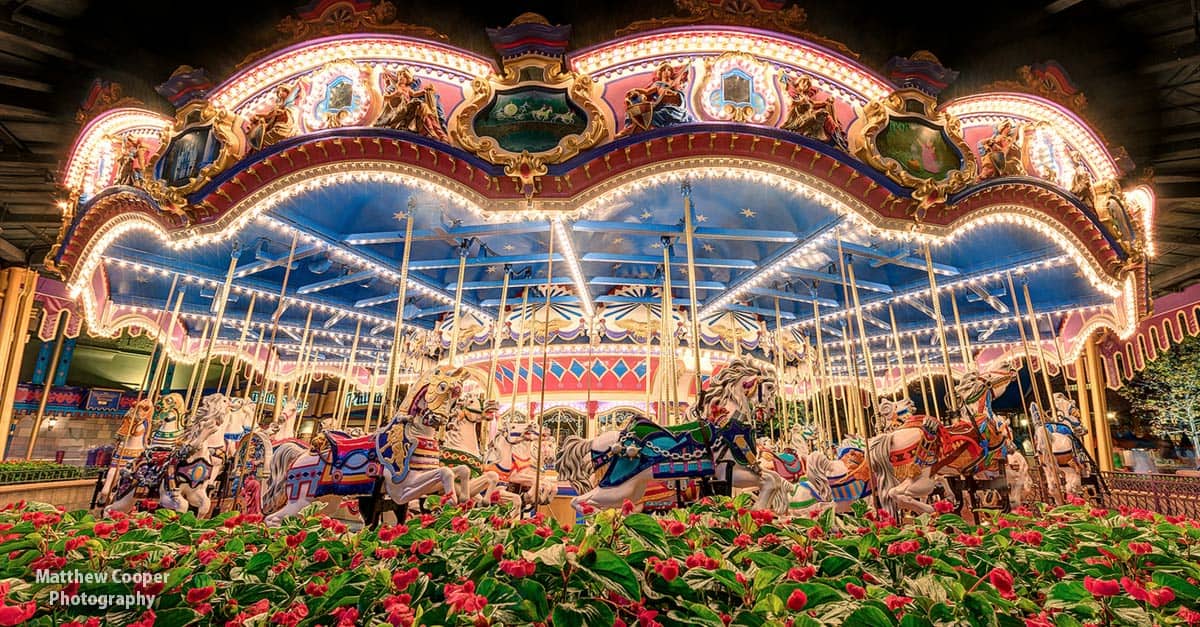 The Muppets have made their way to the Magic Kingdom! You can catch them just outside the Hall of Presidents attraction at Liberty Square and enjoy their presentation: “Great Moments in American History.” However, some of the antics are more hysterical than historical. Join Kermit the Frog, Miss Piggy, Fozzie Bear, Gonzo the Great and others—don’t forget the most patriotic eagle on the planet—Sam the Eagle—as they reenact historical events from Paul Revere’s ride to the signing of the Declaration of Independence and more. The presentation takes place multiple times throughout the day. Consult your Times Guide for exact times when you visit the park.

You’ve ridden on merry-go-rounds before, but not Disney World-style. This beautiful carrousel measures 60 feet in diameter, making it one of the largest carrousels of its kind. It was built in 1917 and installed at Belle Isle Park in Detroit, Michigan. It was later found at Olympic Park in New Jersey in 1967, and that’s when Imagineers just knew they needed its presence at the already under construction Magic Kingdom. They acquired the giant carrousel and it underwent an exhaustive renovation before it was introduced to the public at in 1971. You’ll enjoy a galloping experience on the back of one of 90 ornately decorated carrousel horses. Or you can choose to ride in the intricately carved chariot on the carrousel. Traditional carrousel organ music plays as your horse gallops up and down, down and up! On your ride ‘round and ‘round, you’ll notice 18 hand-painted works of art—each one retelling a part of Cinderella’s story. The carrousel is fun to ride and a breathtaking work of art to behold!

Goofy’s at it again as the “Great Goofini!” And this time, he’s testing his daredevil skills in homemade stunt biplanes near Storybook Circus—and he wants you to join him! Board a stunt airplane (if you dare!) and take part in Goofy’s silly show. This kiddie coaster is fun for kids of all ages, as well as Mom and Dad! FastPass+ service is offered for this ride, but your selections are usually better utilized on other attractions that have long queues throughout the day. Later in the day, you usually won’t have long waits in the queue for this attraction.

This attraction is great for those warmer spring and summer days at Magic Kingdom. Casey Jr., the train from Disney’s 1941 feature film Dumbo, has rolled into the station, and he’s letting off some steam! He and his animal friends spray water when you least expect it! Bring the kids (in their swimsuits if you like), let them cool off and enjoy some fun water play while you relax as well. This is a wonderful attraction for young families and gives everyone in the family a few minutes to sit down, play and take a load off! What are you waiting for?

When you first saw Disney’s Aladdin in theaters, was your heart filled with excitement about the prospect of flying aboard a magic carpet? Mine too! Well, wait no longer! In Adventureland at Magic Kingdom, you can fly on your very own magic carpet—high above the bazaar in Agrabah! Soar above the marketplace as you control the up and down movements of the carpet with the onboard joystick. Just watch out for those camels—they spit!