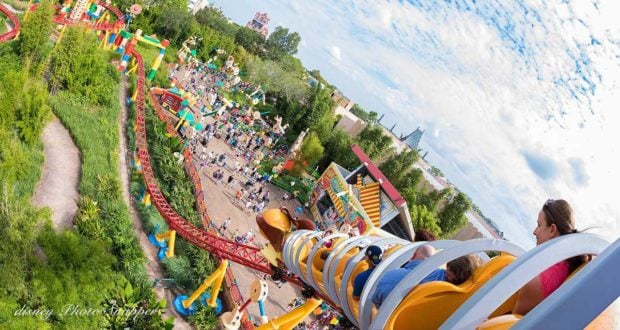 The first time we rode Slinky Dog Dash in Toy Story Land, we could only think of one word to describe the experience… AWESOME! Since that first experience, Slinky hasn’t disappointed since. If you’re heading to Disney’s Hollywood Studios, there are some things that would be helpful to share with you about Slinky Dog Dash. Here’s what you should know…

By the time you get through Hollywood Studios’ security and make your way over to Toy Story Land, the wait time for Slinky Dog Dash can creep up to 60-80 minutes. If you visit the attraction right at rope drop however, your wait is typically under 30 minutes. Typically you’ll get into a line that snakes its way well past the normal attraction entrance. Cast Members are around directing the crowds to where the line ended. We’re thankful for the numerous umbrellas set up along the pathway to protect people from the sun. Plus, even though it is long line for this popular attraction, the line moves quickly. Somehow this helps, doesn’t it? It seems like if we’re constantly moving and making progress, the time goes faster.

2. You Need the Play App

The Play Disney Parks Moblie App is a long line lifesaver! While waiting for Slinky Dog Dash you can play Andy’s Boardgame Blast, a game on a single device for two to five players. Y’all—whoever came up with this game is a genius. Though our family works together as a team to earn points in the board game, each player gets a chance to actually do the activity individually. For example, player one would do a maze challenge, then they would be prompted to pass the device to player two to do the same maze challenge. So there is no crowding around or fighting about who gets to press buttons. Plus, the game mixes up the order too so player one is not always the first player. Other challenges include taking photos and “dressing them up” with silly stickers, crazy bowling, and more.

3. Check Out the Queue Design

To conserve battery power, you may not want to play Andy’s Boardgame Blast the entire time. You can also pass time by playing normal waiting games (we love to play Disney Twenty Questions) and just enjoying the theming within the queue. Now, Slinky Dog Dash can’t really be classified as an interactive queue, such as the likes of Seven Dwarfs Mine Train or Winnie the Pooh. But there is a lot to see and enjoy. Turns out Andy is the “designer” behind Slinky Dog Dash, so it’s fun to see “his” creative plans as you move your way through the cattle crossings.

Like, for real, only two people can sit in each row. In any other ride besides Barnstormer, you’re usually allowed to ride one adult with two small children. But in Slinky Dog Dash, each seat has its own adjustable lap bar rather than one that stretches the length of the row. Therefore, you must ride only two to a row. This may not be a problem for some parties. Cast Member will help you problem solve the seating arrangement if you have more children than adults.

You guys. It’s so fun. Exclamations of “That was awesome!” and “TOTALLY worth the wait!” and “Oh my gosh that was so fun!” formed a chorus among us and all the other riders around on our first ride. It’s fast, and the ride is super smooth. It makes you laugh and scream all at the same time. It’s got unexpected elements and pauses to build anticipation. It’s just so good. Three cheers for Slinky Dog Dash!

Have you ridden Slinky Dog Dash in Toy Story Land? What did you think?

BONUS TIP: Consider planning and booking your next Disney trip with an Authorized Disney Vacation Planner you can trust like Mickey Travels. They’ll help you get the best Walt Disney World deal, share expert advice and their services are totally FREE!  It’s genius!