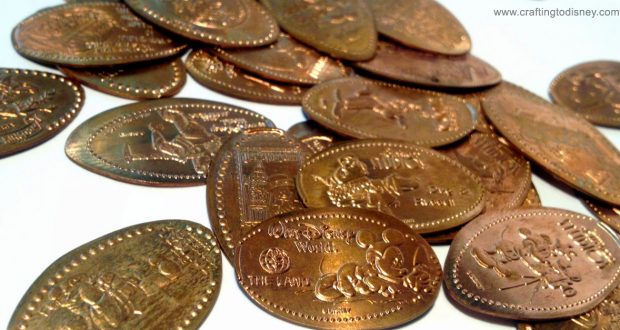 If you’ve begun a pressed penny collection on your Disney World vacations, you know how vast the choices are and how hidden some selections can be. It’s easy to find pressed penny machines when you’re in the parks. But there are several machines scattered around the hotels as well, which require extra effort to obtain. Here are a few locations that may not catch your eye right away as well as some that are noteworthy for their prized selections…

10. Contemporary Resort Fourth Floor – If you’ve passed by this collection of pressed coin machines, you may not think it very secretive, simply due to the number of options you’ll find there. But if you’re not staying in the Contemporary, you may not think to look at this concourse location. There are six machines (three penny and three quarter), so it’s a jackpot of penny designs, including Stitch, Pooh, Dumbo, Tink, and special coins for Chef Mickey’s and the Contemporary.

9. Boardwalk Resort, ESPN – Almost everyone knows about the machine at the Boardwalk boat dock. But sports fans should definitely look a little further. There are ESPN themed coins inside the ESPN Club at the Boardwalk.

8. Pop Century Resort Souvenir Shop – With the release of the live action Jungle Book movie, there are bound to be some collectors looking to start a Jungle Book penny series. At the Everything Pop Shop you can kickstart your collection with four out of the six Jungle Book pennies (among other options). It’s a bank of several machines, so you won’t miss it once you locate the shop.

7. Caribbean Beach Resort Arcade – It’s no secret that lots of the arcades contain penny machines. But this one makes the “almost secret” list because Lighting and Sally have recently been moved there from Hollywood Studios. If you’re collecting the Cars series, you’ll need to put this location on your itinerary.

5. Polynesian Village, Wyland Gallery – There are several more obvious machines scattered around the Polynesian. But one somewhat hidden machine by the art gallery will provide you with the odd selections of Dwarves #4 (Sneezy), Villains #3 (Scar) and a random Buzz Lightyear.

4. Grand Floridan Second Floor – Again, there are several machines around the Grand Floridian. But a single machine on the sprawling second floor of the lobby has the potential to be passed by. You’ll find Nemo #5 (Pearl), a 2016 Goofy, and a simple Mickey face.

3. Port Orleans Riverside General Store – A stand-alone machine in the out-of-the-way Fulton’s General Store will reward you with three lovely Winnie the Pooh character pennies (not part of an official series).

2. Fort Wilderness Reception Outpost – Find three of the Monster’s Inc. series at the Reception Outpost. (For those wondering what that is, it’s basically just the check-in area for campers. A little building next to pull through lanes.) You can snag #4 (Boo), #5 (Waternoose), and #6 (Celia) all in one shot.

1. Saratoga Springs Resort Lobby – Yes, most resorts have machines in the lobby. But this one makes the list because there are hardly any machines at this resort at all. So you’ll basically have to make a special trip to get your hands on the delightful selections of Mickey, Donald, and Cinderella. Look for the machine near the TV area. All the pennies are action scenes with no embellishment, giving them a sort of nostalgic charm. Totally worth the effort for a true collector.