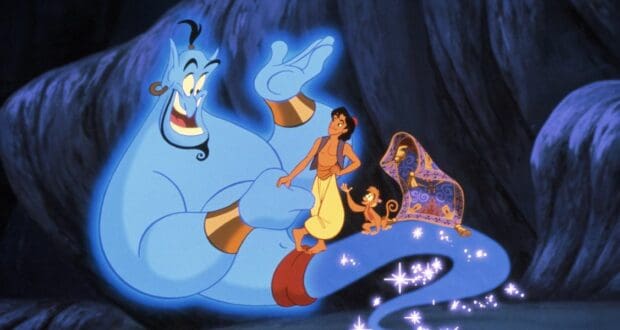 Disney Characters with the Most Giving Nature

Throughout the years, we’ve seen some pretty generous characters being brought to life within the realm of Walt Disney Entertainment. Excluding villains, of course, it goes without saying that the vast majority of Disney characters exude a moral, kindhearted nature about them. The exemplary examples established by Disney Princesses provide the perfect demonstration of such precedents, as do the righteous portrayals of overall goodness by Mickey Mouse and his extended group of friends.

It would be a fruitless effort to even try to recognize each and every kindhearted creation by Disney. But we’ve scrounged together a list top 10 characters who demonstrate the spirit of selflessness and the true, generous nature of giving.

This is a case for big-heartedness coming in a small package. Jiminy Cricket may be tiny in size, but he is the very symbolic personification of the title protagonist’s guiding conscience as featured in Disney’s animated classic Pinocchio from 1940.

While this conscientious cricket originally had a much smaller role and tragic demise, to say the least, the magic of Disney reworked the storied situation, assigning Jiminy a much more crucial presence while also giving the Pinocchio character a far less detestable nature. It’s also worth mentioning the other kindhearted contenders in this picture as well, including Geppetto and the Blue Fairy.

Related: Let Your Conscience Be Your Guide with this Jiminy Cricket LoungeFly Mini Backpack

It’s hard not to like the Genie from Disney’s Aladdin, whichever version of the film you refer to. Both the 1992 animated installment as well as the live-action adaptation from 2019 showcase a positive, upbeat, all-powerful kind of guy you’d definitely want to have on your team. Perhaps it is merely the binding contract that endeavors genies to yield to whatever one’s master commands, but we can’t overlook the true enjoyment he gets out of granting the title protagonist’s wishes.

We also can’t deny his less-than-enthusiastic response when at the mercy of Jafar. This is proof enough that Genie doesn’t merely give because it is what genies do, but rather he gives because he truly exudes a caring and generous nature.

Even though he’s only a kid through most of Disney-Pixar’s Toy Story franchise, there’s no questioning that Andy’s a great guy. Unlike the unscrupulous Sid character, Andy truly loves and takes care of his toys. Perhaps that is why he appears to be at odds with the decision he ultimately comes to by the time Toy Story 3 comes around.

All the same, Andy remains strong and does what he knows is right — what will make another child truly happy in what can arguably be described as one of the greatest onscreen demonstrations of selflessness ever depicted in a Disney film.

When we are first officially introduced to the character of Kristoff in Disney’s 2012 movie Frozen, he appears to put on a somewhat begrudging and unwilling front about helping out Anna. But as we see their onscreen chemistry start to build and his devotion in sticking by her side throughout it all, the truth in his kindheartedness reveals itself. Then, his selfless desire to deliver her back to the one she claims is her true love, setting aside his own budding feelings for her sake, brings his giving spirit blatantly to the surface.

Flora, Fauna, and Merryweather (alternatively known as “the good fairies” in Disney’s animated adaptation of Sleeping Beauty from 1959) live up to their reputations for being “good.” They did, after all, help to protect and raise someone else’s child — a grand task regardless of the said child’s royal status and social standing. Their willingness to use magic for the sake of safety and give so much of themselves without expecting anything else in return speaks volumes.

All of the seven dwarfs featured in Disney’s 1937 animated classic Snow White and the Seven Dwarfs do in fact exude a kindhearted demeanor. Yes, that means Grumpy too! When you consider how sweet the titular heroine is, it’s no wonder why so many people would want to help her (Evil Queen excluded). Even the huntsman was charmed enough to avoid his intended grim task.

And let’s not forget all those animal friends willing to help out in whichever ways they are able to do so. But the seven dwarfs really did exemplify the concept of taking care of Snow White, just as she took care of them. For all intents and purposes, they opened their home to her and even stayed by her side through the fateful unthinkable ordeal that nobody expected to end up being a happily ever after.

These tiny titular rodents from Disney’s animated hit from 1977 and follow up sequel from 1990 do their part so perfectly in “rescuing” those who are in great need. They give selflessly of themselves and go on treacherous missions, all for the greater good of saving those who need saving, even when the one in need of rescuing happens to be a young human child. It’s the ultimate demonstration of a giving heart.

There’s nothing more heroic than the selfless acts of heroes who go out and risk their lives for the greater good of all mankind. What’s more, the scenario played out in this Disney-Pixar film franchise is that superheroes are not only unappreciated but are also deemed illegal. And with all that, you still find this family of supers risking it all to save others in the true sense of commitment to the cause.

There’s no doubt about the title heroine as presented in both the animated classic and live-action remake of Cinderella being a kindhearted young woman. And despite growing up in a less-than-stellar family situation, she does have a lot of uncommonly good friends on her side, including amiable animals of all kinds as well as a Prince Charming who cannot help but be attracted to her.

But perhaps the most giving presence in her life has to be her one and only Fairy Godmother. This magical being just doles out the enchantments to the meek and mild girl, who never asked for much to begin with. For someone, magical or otherwise, to go through such lengths to ensure that the one they are bestowing such kindness on has the most optimal evening imaginable really tells a lot about her loving nature.

Here you have the very epitome of optimism personified in this little girl figure, who leads as the title protagonist in this live-action Disney classic from 1960. Although Disney has a tendency to tweak preexisting stories for a more positive onscreen portrayal, the classic character as featured in the original novel by Eleanor H. Porter is equally as optimistic as demonstrated on film.

She’s just a cheerful little girl who brings positivity and sunshine wherever she goes and proves that kindness to others and finding something to be glad about in everything are keys to changing the world for the better.

Again, we cannot possibly list all the other contenders for kindhearted, caring characters from Disney who demonstrate the true spirit of generosity and giving. As is often the case, there are more than not who live up to such reputed standards. But that’s to be expected, given Disney’s tendency to uplift, encourage, and inspire fans of all ages while championing the spirit of giving.