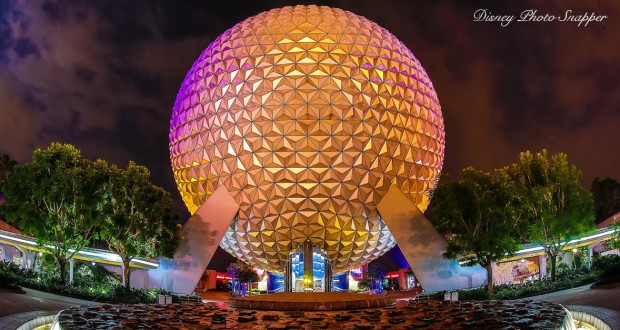 10 Amazing Facts About the Geodesic Sphere of Spaceship Earth

The Geodesic Sphere of Spaceship Earth is Epcot’s super-recognizable centerpiece. It was an opening day attraction at Epcot, and the structure has been the symbol of Epcot ever since. Inside the iconic structure is an impressive trip back in time to explore the origins of human communication and its evolution over time.

10. It’s the Largest Free-Standing Sphere in the World

With a 165 diameter, Spaceship Earth has definitely earned this distinction! The structure is 180 feet (18 stories) tall (the sphere starts 15 feet above the ground). The structure weighs close to 16 million pounds.

Spaceship Earth could actually be fully submerged in the main tank at The Seas! If you’ve never noticed just how large the tank is, make sure to walk around The Seas fully after riding the Nemo ride. Don’t miss the upstairs!

Spaceship Earth gives guests an overview of the history of communication, spanning 40,000 years! The story was written by Disney Imagineers, along with Ray Bradbury. Various universities were also consulted for accuracy, as well as the Smithsonian Institute.

6. Sphere Within a Sphere

Spaceship Earth is actually comprised of 2 spheres. The first one contains the actual ride; the second one is a sort of “shell”, located 2 feet outside the first sphere. The 2-sphere design allows rain water to be gathered in a type of gutter system, rather than streaming down the sides on to people below. The water is actually absorbed through the first sphere through small openings in the surface, and the water is then channeled into the World Showcase lagoon through the gutter system.

It took slightly over 2 years (26 months) to build Spaceship Earth. Spaceship Earth sits on a hexagonal support, which is in supported by six legs. The spiral-shaped ride structure (where the cars actually go around the center and ascend) was built before the shell was constructed. The geodesic sphere, being a much more novel concept than a dome, took a lot of time to perfect. Disney hired MIT to conduct engineering studies, specifically in regards to wind pressure underneath the sphere (where guests would pass through).

Disney could have just thrown props into the ride, and none of us would know any differently, right? Disney, however, isn’t in the business of doing that. The items in the ride are all authentic representations. For example, the hieroglyphics in the Egyptian area are actual translations of letters from the Pharaoh.

When you reach the part of the ride where the history lesson ends and you are turned around to see planet Earth, you are at the top of Spaceship Earth. For a short time in the ride’s early days, a person was stationed there to manually turn the cars backward. Now, of course, this happens automatically. If you’re afraid of heights, try not to think about being in the very top of that giant sphere! I thought about it in detail on a recent trip and it caused me to panic a bit!

The Spaceship Earth script has actually been narrated by four different people. Lawrence Dobkin (an actor from Star Trek and The Ten Commandments, among others) was the original narrator, from the 1982 to 1986. Next was renowned broadcaster Walter Cronkite, from 1986 until 1994. Following Cronkite was actor Jeremy Irons until 2007 (the villainous “Scar” from The Lion King). Currently, the ride is narrated by the elegant Dame Judi Dench.

Do the animatronic figures in Spaceship Earth look familiar? It’s not obvious, but if you visit often and with a critical eye, you might notice that the figures resemble some of the presidents in the Hall of Presidents at the Magic Kingdom. Making the molds for the Hall of Presidents was an extremely intricate task, so when it was time to stock Spaceship Earth with historical men, some of the molds from the Hall of Presidents were used again. Of course, different details, such as hair, clothing, and make-up, were used to make sure that President Eisenhower wasn’t recognized as a Renaissance lute player.
Hopefully you’ve enjoyed our facts and gained a new appreciation for Spaceship Earth as more than just a “giant golfball.” It is truly a beautiful icon, interesting attraction, and amazing feat of engineering!