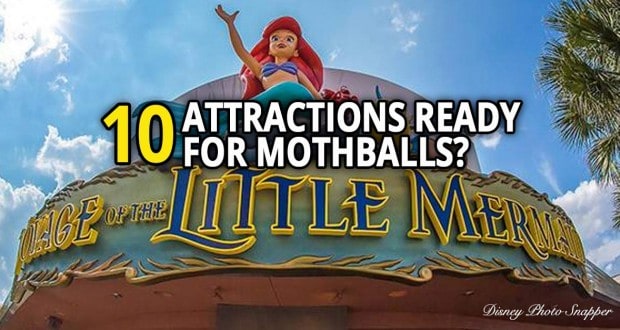 10 Rides That May Be Ready For Mothballs?

Are These 10 Disney Attractions Ready for Mothballs?

9. Carrousel of Progress – I personally love this ride (another original to Magic Kingdom). Again, the ride rarely has much of a wait and offers classic Disney music to enjoy. But, the attraction does show its age. When Magic Kingdom opened in 1971, Tomorrowland was supposed to be set in 1986 (you can see that when you view the final scene of the show). We have traveled well past this time and some believe that it is time for something new to take this spot in the back corner of Tomorrowland.

8. Stitch’s Great Escape – another ride situated in Tomorrowland, Stitch’s Great Escape does not come close to matching the thrills and chills that was offered by ExtraTERRORestrial Alien Encounter. The attraction is a “theatre-in-the-round” style show that offers flashing lights, loud noises, and pressurized air cannons. Certainly something more dynamic can be designed by the Imagineers to replace this attraction.

7. Captain EO – this attraction was brought back after the passing of Michael Jackson in the Imagination Pavilion at Epcot. When introduced in 1986, the show was very inventive and innovative. It was the collaboration of George Lucas, Francis Ford Coppola, and Michael Jackson, all fused together with Disney magic. However, no updates have been done to this attraction and the theatre itself does show its age and fails to meet the Disney standard.

6. Living with the Land – this entry should come with an asterisk. I am not advocating that the ride be scrapped, but I do think that there needs to be a significant overhaul. Horticulture is hard to theme, but if anyone is up to that task, it should be Disney. Additionally, new technologies or crops should be featured to keep the ride current and engaging. After riding the ride once, there is little reason to ride again, unless, of course, you are digesting your meal from Sunshine Seasons or from the Garden Grill.

3. The Many Adventures of Winnie the Pooh – located in Fantasyland, this ride allows you to journey through the Hundred Acre Wood in a honey pot. The honey pots transport you on a stationary track and is not very exciting. However, recent advances in ride technology in other Disney parks could be incorporated here (Mystic Manor is the best example of this technology) to make it more enjoyable. The ride is not innovative and certainly can be replaced with something much more engaging and entertaining (some purists argue Mr. Toad’s Wild Ride never should have lost its place at Magic Kingdom for this attraction). I have had more fun waiting in line for this ride than I have had on it itself.

2. Journey into Imagination with Figment – another track ride located in Epcot, this ride takes you through a variety of scenes and attempts to demonstrate the power of imagination. The song is subject to much dispute – I enjoy it, but others find it annoying. Certainly, this ride can be improved and re-designed to closer meet the mission statement of Epcot and offer a more exciting ride experience.

1. The Enchanted Tiki Room – this attraction in Adventureland follows a dinner show-motif with a variety of different musical avian acts. The ride does take up a decent-sized footprint and could certainly be used to house something new and exciting. The attraction runs constantly throughout the day and there is never a huge demand for it.

Closures of rides and attractions always cause controversy. Case in point – Maelstrom. Some were happy to see the campy attraction leave. Others were heartbroken that the polar bears and trolls were being replaced with Olaf and Sven. Disney is somewhat sensitive to guests feelings about different rides and attractions, but, ultimately, Disney’s drive and desire for innovation will always continue to lead to ride and attraction closures. What is your vote for the ride that most needs to be closed down?