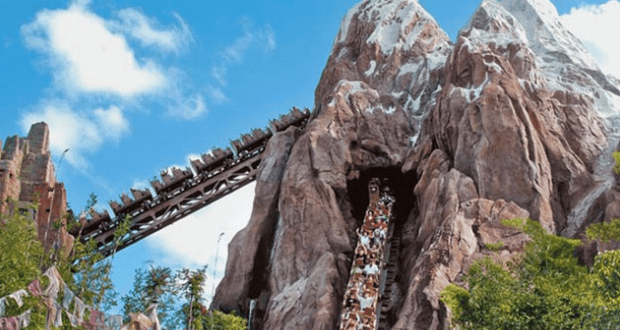 Expedition Everest is one of the most popular and thrilling attractions in all of Walt Disney World. Situated in “Asia” within the Animal Kingdom, Expedition Everest takes you on the journey from base camp to the top of the “Forbidden Mountain” where guests come face to face with the mythical Yeti. This steel roller coaster is some of the finest work ever completed by the Disney Imagineers with multiple surprises and thrills that only Disney can provide. The first time you ride this high speed coaster, guests realize that all is not what it seems when you reach the top of the mountain. Let’s take a look and see what makes this ride so unique for park guests.

9) Illusions of Steam – Have you ever noticed the steam rising when the trains pull into the rider waiting queue? Disney Imagineers installed steam vents under the train station to replicate the effects of a steam powered engine. The steam is not watered based in fear of rusting the tracks and carts.

7) TV Ready – As the Walt Disney Company was working through the planning phases and construction of this attraction, Discovery Networks did a documentary on the process. Three different specials were aired on TV that showcased the attention to detail and preservation of authenticity that was being taken by the Imagineers.

6) Breaking the Bank – As of 2011, Expedition Everest was listed as the most expensive roller coaster in the world. If there is one thing Disney doesn’t do is cut corners by cutting costs. In addition to over a half decade of planning, this attraction cost a cool $100,000,000. If anyone has that kind of change lying around, feel free to construct your own Forbidden Mountain in the backyard.

5) Trophy Case – One thing Disney doesn’t like to do is finish in second place. They knew they had a winner with Expedition Everest when it was opened to the public in 2006. Theme Park Insider agreed and awarded Expedition Everest as the “World’s Best New Theme Park Attraction”. It is my personal favorite attraction in all of the Disney parks.

4) The Yeti is Real – The Yeti isn’t one of the Disney’s Imagineers fictional characters developed solely for the ride. It is actually a mythical creature believed to protect the mountains and valleys of the Himalayan landscape. As a comparison, think of how Americans look at Bigfoot. As riders walk through the queue, they will get a firsthand look at artifacts brought over from Nepal by the Imagineers while in the planning stages of the attraction.

3) Back and Forth – You would think with all of the coasters developed by Disney over the years at least one of them would travel backwards and forwards. Expedition Everest became the first Disney coaster to propel riders both backwards and forwards. For those whom have rode the attraction before, that moment when you think the ride is actually broken and you are propelled backwards into pitch black is enough to make anyone’s stomach drop.

2) Do you want to build a Yeti? – If you think the Yeti likes warm hugs you are sorely mistaken. The mythical creature that surprises riders during the final drop of the ride is twenty five feet tall and was built ‘to-scale’ by Imagineers. They received input from locals in Nepal whom actually believe in the Yeti and its mysterious presence in the Himalayan region. This audio-animatronic figure is the largest ever created by Disney.

1) Frequent Flyer Miles – Disney Imagineers actually traveled to Nepal to help make this attraction as authentic as possible. They spoke with natives to gain insight on the Yeti and conduct days of research. The Imagineers also brought back artifacts and other memorabilia to make riders feel as if they were checking in at base camp before embarking on a journey up the mountain.

While all of these facts may surprise you, it is well known by now that Disney goes the extra mile and leaves no stone unturned when it comes to their attractions. Expedition Everest was one of the Disney’s most expensive projects to date. With Avatar Land on the way in Animal Kingdom, it may help cut down with wait times for non Fast-Pass users. One piece of advice I could give is as soon as your Fast-Pass becomes available, book this ride as soon as possible. The Yeti will be waiting at the top of the mountain for you.

– How To Tackle Animal Kingdom 101: Part 1: Rides and Attractions