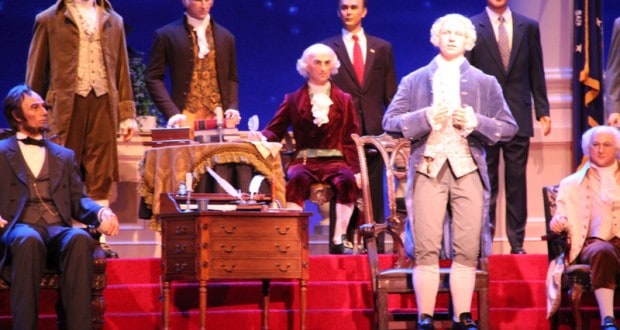 There are sculptures/audio-animatronic figures of all 44 presidents that appear after the curtain lifts towards the end of the attraction. The first 43 Presidents were sculpted by Blaine Gibson. When it came to sculpting President Obama, Gibson was 90 years old. He gave over the task to his protégé, Valerie Edwards, who then subsequently created the sculpture of our 44th president.

As an homage to patriotism, the building that holds the Hall of Presidents was designed to look like Independence Hall in Philadelphia. The sign on the building reads 1787, which is that year that the U.S. Constitution was signed. The rotunda style theatre can seat up to 700 people and is home to 5 massive production screens.

The Hall of Presidents originally would have been wax figures in Walt Disney’s vision. Yet, the power of technology took over the attraction. The New York World’s fair 1964-1965 is when he unveiled his audio-animatronic version of Abraham Lincoln (his favorite president), which would later stem into the attraction we know and love today!

Guests who have visited the Hall of Presidents may have noticed the Presidential Seal on the floor guarded by a gate. This location is the only other place the Presidential Seal can be displayed other than The White House. In fact, it took an act of Congress to allow its display there! The influence of Walt Disney World is incredible.

The queue area is filled with art and artifacts from our Presidential history! There are portraits of Thomas Jefferson, Ronald Reagan, George Washington, and more. There is a microscope owned by John Quincy Adams, a golf club owned by Woodrow Wilson, and a Powder horn used by Theodore Roosevelt. There is even a beer mug that belonged to George Washington! Take the time to look through all these fascinating trinkets.

The Hall of Presidents made its debut on October 1, 1971, making it an opening day attraction at the Magic Kingdom. Originally, Walt Disney wanted the attraction to be dubbed, “One Nation Under God” in Disneyland. Ultimately, Disneyland gained “Great Moments with Lincoln” and the Magic Kingdom received the Hall of Presidents after Walt Disney’s death.

The video portion of the attraction highlights the presidencies of George Washington, Andrew Jackson, Abraham Lincoln, who delivers the Gettysburg Address, Theodore Roosevelt, Franklin D. Roosevelt, and John F. Kennedy. The show highlights monumental events in America’s history, including the Civil War and the Great Depression.

A hidden Mickey can be found on the sword held by George Washington in one of the lobby’s portraits. 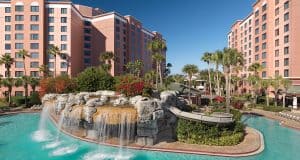 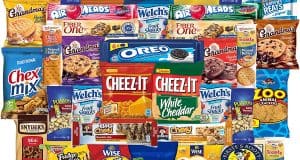 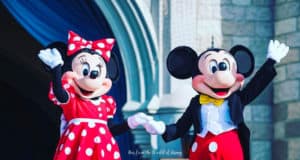