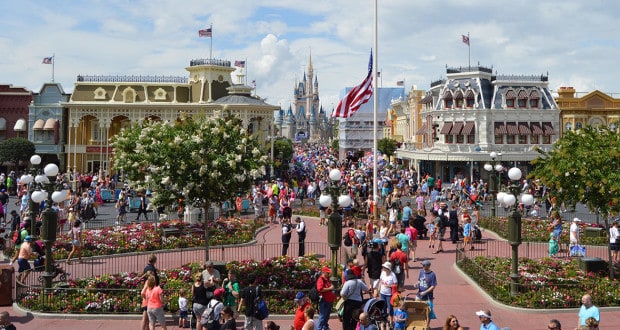 We have been in love with Magic Kingdom and all of its glory since the first time we went. From its distinct glow at night, to the fact we’re absolutely sure every inch of it is covered in magical pixie dust, we love the beautiful sights of Magic Kingdom. Even though it was hard, we narrowed down our favorite sights in this magical park.

10. The Stars in Space Mountain

People love stars; we cannot help it. The Imagineers honed in on this love and our fascination for space in the most perfect way. Take a ride on Space Mountain and while you’re zipping and zooming, try your best to look around and gaze at all the stars that surround you. If you can manage it, notice all of the shooting stars too.

Enter the park and head straight up the stairs to the Railroad Station. Stand there and take your sight in. Watch Main Street, U.S.A with all its hustle and bustle and look at all the perfect idyllic buildings lined up. You can see bunches of Mickey balloons bobbing around and lots of sweet families heading into the crowd ready for their next FastPass. It’s beautiful because it’s what makes Magic Kingdom so amazing. It’s the first thing guests see and it usually evokes an emotional response for most of them.

8. Rapunzel’s Float in the Festival of Fantasy Parade

Festival of Fantasy Parade never disappoints in pulling out its best and most brilliant characters, dancing, and floats for this particular show. The Rapunzel Float is arguably one of the most gorgeous showpieces Walt Disney World has ever presented. The float is a majestic ship containing all of your favorite Tangled characters including a swinging Maximus and dancing Flynn. The colors are bright and the ship looks like it could sail right now if we put it on the Seven Seas Lagoon. Look for all the minuet details like Pascal at the front of the boat and an all too familiar wanted poster of Flynn Rider. The most beautiful part of the float is by far Rapunzel’s long hair filled with flowers flowing through the whole boat.

This tree is beautiful on its own if not for its story. It’s based on the real Liberty Tree in Boston where former Sons of Liberty gathered before the famous Boston Tea Party. If you ever have some time at night in Magic Kingdom, and you have time before your next FastPass at Haunted Mansion, stop and take in this sight. Adorned with thirteen lanterns (if you can guess what they represent) The Liberty Tree stands tall and long and is usually passed by. We love to stand and look, it’s in the midst of Liberty Square, which is a lovely land in itself. At night, Liberty Tree sparkles and emits a calming energy, which is often hard to find in Disney World.

6. The Ballroom in Be Our Guest

Yeah, there was no way we couldn’t add this to our list. Step into Beast’s castle and prepare to have your Disney Fanatic mind blown. The ballroom in the main room of the Be Our Guest restaurant is an Imagineering feet you absolutely have to see. From the snow falling outside, the regal chairs and tables, and the large chandelier in the middle of the room, you’ll keep asking yourself if you’re sure you’re not in Beauty and the Beast the movie. Look up and marvel at the most spectacular view of them all, the painting on the ceiling. Remember the scene in the movie and all the shots of the ceiling? The painting in Be Our Guest is an exact replica and it takes our breath away every time.

5. The Liberty Square Riverboat at Night

We said we love Liberty Square, and this is why. After your quiet time looking at the Liberty Tree, find a bench to sit and wait for the Liberty Square Riverboat to float on by. With its many glowing lights and Colonial charm, you cannot help but fall in love with this large steamboat. Want an even more beautiful view? Go ahead and hop on board and sail down the Rivers of America.

This one took us by surprise, but it’s still one of the most magnificent sights in the Magic Kingdom. Maurice has set up quite a home for himself in Fantasyland right next to Beast’s Castle. Maurice’s home is tucked between trees and flowers and has all the charm of the cottage in the movie. The shape and size of the cottage makes for a sweet and welcoming environment for Enchanted Tales with Belle, and who can forget all the Imagineering details. Inside and outside Maurice’s humble abode you can see his inventions (finished or unfinished) and little references to the movie. Even if you don’t plan on trying out Enchanted Tales with Belle, at least stop by her father’s home and take a look because you won’t be disappointed.

When you’ve been dashing to get on this famous rocking mine train, have you ever stopped and looked at it? It’s truly a perfect view, and the inside of the attraction is just as beautiful. Notice the tall trees and sweeping mountains, there’s also a waterfall, which adds another magical touch. If you want another thing to marvel at in this attraction, go ahead and take an adventure with the dwarfs and look at the glorious jewel mine. For your inner little girl, there are sparkles and shimmering jewels to “ohh” and “ahh” at, and you cannot help but smile when you see Dopey adorning two large diamonds in his eyes.

Here we have it folks. The thing, which has captured our hearts and gave us chills for years and years as we have stepped into the Magic Kingdom. Cinderella’s Castle is something we Disney Fanatics could sit and stare at for hours on end. Seriously, whether it’s the middle of the day, or at night when the Castle is covered in the Celebrate the Magic graphics, and especially when its covered in twinkling lights for Christmas, it’s breathtaking. We take our Cinderella’s Castle in every way it comes and we still cannot help but be inspired and awestruck by it.

Walt Disney World is famous for its firework shows, and Wishes is arguably the best one in all of Disney World. Beauty comes in different forms with Wishes. It’s musically beautiful and visually spectacular, and has a perfect narration from Jiminy Cricket. Listen to the message of encouraging everyone to have wishes and not being afraid to dream big while colors dance through the sky. Sing along to “When you wish a upon a star, makes no difference who you are,” and hear your favorite characters from Peter Pan and Snow White wish with all their might. All the while you’ll see the Castle and the entire Magic Kingdom light up and burst into a lot of different colors. If you want a unique and less crowded view of Wishes stop in Fantasyland by Beast’s Castle, you’ll feel right in the middle of the magic.

Thanks for letting us share our favorite and most beautiful sights of Magic Kingdom. Do you have any spots in Magic Kingdom you can’t help but stop and wonder at? Let us know in the comments below.