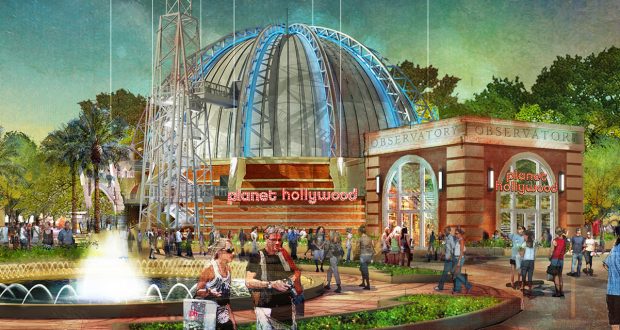 If you have not yet dined at the newly renovated Planet Hollywood Observatory, consider it a must do. As one of the later Disney Springs renovations, it opened fairly recently and is boasting a new menu more delicious than ever and a gorgeous new design. In this article, we are counting down the top ten reasons you will love this renovation and the new and improved Planet Hollywood Observatory.

Immediately after walking into the restaurant, I felt the refreshing impact of a more, open and free flowing design of the restaurant. Accessibility and overcrowding were problems I often complained about at the original Planet Hollywood. The new design seems to allow more walking space.

Get ready to enjoy music videos and film clips on the biggest screen you could imagine. The music mix is fun and upbeat popular songs from the 1990s and 2000s mixed in with the occasional Disney song. Smaller televisions are located around the restaurant as well, for those not facing the mega screen.

Food icon and super chef Guy Fieri is the designer of the new Planet Hollywood Observatory menu and we are very glad he is. To say the food is a cut above the rest is an understatement. The burgers, appetizers and sides offered on the menu these days are delicious, quality tasting and served in hearty portions. I chose a play on my favorite comfort foods for my entrée, a macaroni and cheese, bacon, cheeseburger. The Bacon Mac-n-Cheeseburger was juicy, and smothered in just the right amount of cheese and mac and cheese. Crispy bacon paired with Guy’s famous donkey sauce and onion straws made for an entrée so good, I wanted to visit the restaurant a second time during my vacation.

Do yourself a favor, and save room for dessert because you do not want to miss the Super Nova Shakes offered at Planet Hollywood Observatory. Imagine the tallest, most eye popping, and heavily loaded milkshake you have ever seen and you have the Super Nova shake. These creations are certainly sharing size as they are topped with goodies that range from fruit to cake, cookies, candy, and whipped cream and chocolate sauce. Coming in at around fifteen dollars per shake, I also consider them to be a super reasonable Disney dessert. Choose from cotton candy, chocolate or strawberry super nova shakes. Better yet, visit several times to try them all.

Kick your meal off the right way with a delicious appetizer. Nachos, shrimp, cheese dip and Chinese Pork BBQ are just a few of the fun new items on the appetizer menu you need to sample at Planet Hollywood Observatory. Not to worry, the classic Planet Hollywood staple Captain Crunch Chicken is still on the menu under a new name. Be sure to order the World Famous Chicken Crunch if you are a Captain Crunch Chicken fan.

The updated theming ushered in a great transition for Planet Hollywood. The theme is fun, sleek, and will likely draw in new guests; the observatory idea was genius and really helped bring this restaurant in to mesh nicely with the rest of Disney Springs.

1. All the Hollywood Charm you Love

Fans of the classic Planet Hollywood need not worry; there is still plenty of classic Hollywood charm oozing from the restaurant. Forest Gump’s Curious George book and Nike running shoes as well as Dorothy’s blue gingham dress from The Wizard of Oz were two of my favorite movie displays in the restaurant.