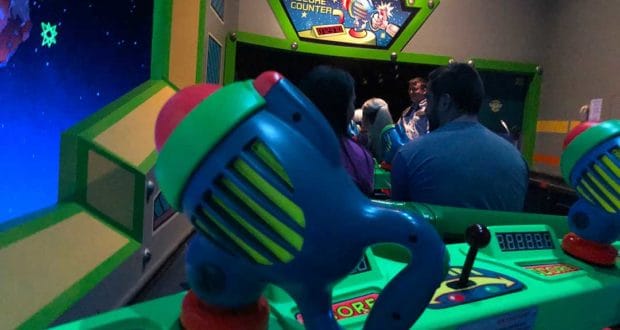 As the theme parks in Orlando begin submitting plans for their gradual re-opening, we’ve started to think about the attractions at Walt Disney World where you’ll definitely want to use your hand sanitizer before and after you ride.  It’s possible that Disney will provide sanitizer to guests prior to boarding or after exiting the attraction.  Obviously some attractions are more hands-on than others, so here is our list of the top ten rides that you’ll need your hand sanitizer for!

Located in Tomorrowland, this attraction requires guests to use a mounted and movable laser gun to help Buzz Lightyear fight the evil emperor Zurg.  Guests use the laser gun to move it around and aim at the targets throughout the attraction, as well as pull the trigger.  The attraction utilizes an OmniMover-style ride system, so it is constantly in motion decreasing the amount of time for cleaning.

While the ride vehicle itself doesn’t require guests to touch much other than a seat belt, guests will want to make sure their hands are clean before and after the Design Studio.  Prior to boarding the attraction, guests are invited to design their own concept car using giant touchscreens.  There are separate design studios in the queue, so we would imagine that Cast Members will be able to wipe down the screens between uses to ensure they are clean prior to each use.

A similar-style attraction to Buzz Lightyear, Toy Story Mania takes guests on a voyage through all the classic midway attractions – ring toss, throwing darts, breaking plates, and more.  To accomplish this task and earn points, guests are required to pull on the string in the back of the gun, as well as move the gun around to point and aim at the targets.  Given the loading and unloading positions are close together and the popularity of the attraction, we imagine guests will be encouraged to use sanitizer before and after their ride.

Given the popularity of this E-ticket attraction, guests are sure to continue to flock to Pandora when the parks re-open.  While guests aren’t called on to design anything or use any kind of gun, the ride system is unique and puts guests on the back of a banshee.  Guests need to grasp onto the ride vehicle for their safety and to fully experience the ride.

Not an attraction per se, but on a hot day in the Magic Kingdom, getting out of the sun and relaxing for five minutes, nothing is better than shooting at some targets.  For $1, guests get 35 shots at various targets trying to activate different responses.  Not only are the guns constantly being touched and moved around, to take the best shot, guests need to position the gun near their face to aim at the targets.  We wouldn’t be surprised if Disney chose to keep this venue closed during their initial re-opening.

This attraction invites guests to board a rocket for their choice of missions.  Guests are assigned one of four roles for their voyage.  During their mission, guests are then called on to perform specific tasks.  These tasks are performed by switching on a switch or pushing a button.  Since these are high-contact surfaces, we would imagine that Disney would chose to wipe down each capsule between uses to avoid disease transmission in addition to adding sanitizer stations.

These attractions are all similar in design and call Magic Kingdom and Animal Kingdom their home.  These rides are popular with little ones so safety is paramount.  Each ride vehicle gives the guests in them the ability to raise and lower the vehicle using a lever which makes their ride all the more thrilling.  You’ll want to make sure to sanitize before and after taking flight!

One of the newest attractions at Disney World, Smuggler’s Run uses the same task designation system as Mission Space.  During the course of their mission, guests will be called on to either pilot the Millennium Falcon, shoot at incoming threats, or use engineering skills to secure the payload back onto the ship.  The ride comes equipped with multiple pods, so Disney should be able to change the boarding process to allow each one to be sanitized between each mission.

While a classic attraction, guests aren’t clamoring to climb aboard this attraction, but those that do will want to make sure they have hand sanitizer nearby.  While you may choose to enjoy a relaxing spin around in the teacups, guests wanting a zanier ride can spin their teacups with the silver disc in the center of their teacup.  There aren’t many ride vehicles and the wait time for the attraction rarely exceeds fifteen minutes, so we could see Disney choosing to wipe down each teacup after each ride.

The final attraction on the list requires some hand sanitizer since it takes guests upside down.  Due to the inversions, guests are strapped into this roller coaster with shoulder restraints.  These restraints come equipped with hand grips so guests can hold on while making their way to the Aerosmith show!

Disney has always put guest safety and satisfaction at the forefront of their business model, so we are confident that once the parks re-open, they will be prepared to provide the same experience we had before, but with additional checks in place for everyone’s safety.  Are there any other attractions that you’d like to see Disney offer hand sanitizer on?