11 Supposedly ‘Kid-Friendly’ Attractions that May Actually Terrify Your Child

We’ve all either been witness to it or have experienced it firsthand with our little one. That unexpected scream of sheer terror emanating from a child during what was assumed to be an entertaining and light-hearted Disney attraction. The parent freezes, at a total loss, desperately searching for the nearest exit while silently calculating the number of years of psychiatric care it’s going to take to erase the trauma they are currently causing their small child. “This shouldn’t be happening,” they think. After all, they avoided the obvious fear-inducing contenders like Maelstrom and The Haunted Mansion. These were supposed to be a safe bet. It’s safe to say that every child reacts differently, regardless of age, to attractions that include intense or startling moments. There are some children who embrace them with laughter and enthusiasm, and there are those whose spirits are a little more sensitive to frightening sights and sounds. Frankly, sometimes you just won’t know which category your child will fall under until you experience it. But if you have a small child who may lean towards the tender-at-heart side then read on! Here is a list of the most deceptively scary, potential nightmare inducing “kid-friendly” Disney attractions. Consider yourself warned.

11. The Seas with Nemo and Friends

Silly squawking seagulls welcome you into this seemingly fun, visually dynamic journey to find the once-again missing Nemo. You are transported by a slow moving “clam-mobile” as you become immersed in Nemo’s peaceful and pleasant undersea world. But as the water turns murky and the jellyfish appear the trepidation might start to set in for your little one. If experiencing almost near pitch-black darkness or seeing Bruce the shark doesn’t initially have your child white knuckling the lap bar or clamoring (pun-intended) for the exit , don’t you worry, the angry chomping angler fish which seemingly comes out of nowhere most certainly will. And if you have the grave misfortune of your clam coming to a complete temporary stop directly in front of this impossibly noisy fish (which ours naturally did) then you will have a non-stop, looped performance of this brazen display of pure toddler torture.

10. Voyage of The Little Mermaid

Nestled directly across the Disney Junior- Live on Stage building in Hollywood Studios this live theater performance integrating puppets and intermittent animated sequences of our favorite singing mermaid is perhaps more playful and fun than frightening. But it’s dark and can be quite loud. And, oh yeah, there is a monstrous 12-foot tall purple sea witch with billowing fog, glowing eyes and a menacing, spine-chilling cackle. Perhaps it should come as no surprise as the movie itself certainly has its share of scary moments with Ursula and her eerie eel minions but if you grab for the remote and skip those scenes altogether like I do, then you may want to save your child the surprise of a terrifying encounter with this human-octopus hybrid and just head straight to the Disney Junior-Live Stage Show.

I can’t even begin to describe how deep my love runs for this wonderfully creative, 3-D and 4-D sensory experience which incorporates so many of our classic and beloved Disney characters into an adventure to retrieve and save Mickey’s Sorcerer’s Apprentice hat that Donald loses after he is told not to touch it. And thanks to my blind enthusiasm, I failed to remember just how LOUD and INTENSE this sensory explosion truly is when I took my young daughter with me to see it. Before the show, my daughter was a true Donald Duck fan (seriously, he may have possibly even been her favorite). And I single-handedly managed to not only knock him off this pedestal but she now associates him with the likes of villainous evils like Jafar and Cruella. Total parent fail. We only lasted about a couple minutes or so into the show (and experienced that 4-D swoosh of air which only helped raise an octave in her shrill screaming) and were promptly—and mercifully— led out of this dark theater by a well-seasoned cast member and her trusty flashlight. And speaking of 3-D theater shows…

Loud noises, 3-D/4-D effects and Sweetums, the giant Sasquatch-looking Muppet. Enough said. No trying to reason with your little child that this scary looking monster which actually appears and runs about during the show is as kind as his name infers.

Quirky talking, singing birds. Fifteen minutes of cool air-conditioning inside of a “tropical hideaway.” Sounds enchanting, yes? It certainly starts off that way but Disney soon adds in loud chanting from the Tiki gods, tribal drumming, a thunder and lightning storm, an erupting volcano and utter darkness to this animatronic bird-show attraction. This may add a level of intensity that is rather unsettling to a sensitive child. The plus? The attraction is loud enough that if your child starts screaming there is a good chance no one will hear them anyway.

6. Journey Into Imagination with Figment

Raise your hand if you miss the original Journey Into Imagination with the lovable purple dragon and his Dreamfinder friend. Now that that’s out of the way, let’s chat about how this current incarnation of the ride can have your little child koala-bearing you and digging themselves into that nook between your armpit and the seat. The entire ride is an exploration of Dr. Nigel Channing’s Imagination Institute, each individual lab highlighting and exploring one of our five human senses. The first lab, Sound, has us listening not with our “ears” but with our “imagination” and they apparently want us—as all lights are completely turned off—to “imagine” a freight train with its blaring horn is barreling toward us at full speed. Not exactly fun for a child who can’t comprehend and separate this silly fiction from reality. If that doesn’t set off their internal alarms, the serious blast of air that hits you from BEHIND or the obnoxiously foul skunk smell might be enough to have them wishing this ride was just a figment of their imagination.

Who doesn’t love a 53-foot mechanical fire-breathing dragon up close and personal? I know I do. But your tender-at-heart little one probably won’t. This large and intimidating reptile snaking its way down the streets of the Magic Kingdom in this new parade is about as dark and foreboding as the real Maleficent so if you’re intent on witnessing the parade with your little ones perhaps you should stake your post a safe distance away from the anything-but-cuddly creature.

4. Festival of The Lion King

This is another visually captivating and interactive stage show featuring animatronic animals, costumed dancers, acrobats and singers. If the show’s 30-minute running time isn’t enough to draw families with small children away from these Pride Lands, then the loud and pretty intense scene with the movie’s antagonist, Scar, just might.

3. The Many Adventures of Winnie-The-Pooh

This one may be up for debate. After all, what could be frightening about our favorite cuddly, honey-lovin’ bear? If the dream sequence has your little one turning eyes wide as saucers to you upon entering this portion of the ride, here is probably why: Remember that trippy, psychedelic “Pink Elephants on Parade” montage of oddness from Disney’s 1941 Dumbo movie? It’s like you are watching that…only this time you are sitting inside a giant, moving honey pot while it is happening around you. Some kids may think it’s whimsical fun. Other kids (and perhaps some adults) will think it’s a tad unsettling. As for me? I say give it a whirl, but keep in mind there is probably a reason why the same song played during this dream sequence, “Heffalumps and Woozles”, is used often throughout Disney’s Halloween season.

This is the kind of Disney attraction that has a very polarizing effect on people—you either love it or you hate it. The sensation of creepy-crawlers scurrying across your feet and bees stinging your back seems to terrify even the bravest of little ones, causing a massive crescendo of screaming (and often crying) kids in the audience. There is nothing tame about this 3D/4D show which also includes a giant fly swatter in your face (3D style) trying to “flatten” the audience, scuttling black widow spiders and a smelly ol’ stinkbug. If your little ones are even remotely afraid of bugs, this show is a no-go.

Almost as scary as getting trapped amidst the massive hordes of people exiting this innovative-outdoor production when it releases is the collection of Disney’s most evil villains trying to take over Mickey’s imagination during this impressively powerful spectacle. The entire theme of this show is good versus evil so it should come as no surprise that while there are plenty of “good” Disney friends among the cast of characters there are an equal number of evil foes. Add ominously large laser beam visages, thundering explosions, shrouds of mist and fire and you’ve got a perfect storm of terror that has the power to elicit more screams of fright from impressionable children than the actual Tower of Terror ride positioned right next to this amphitheater. 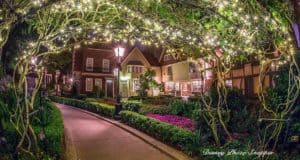 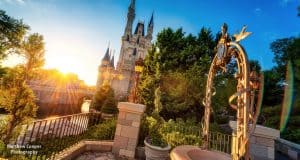