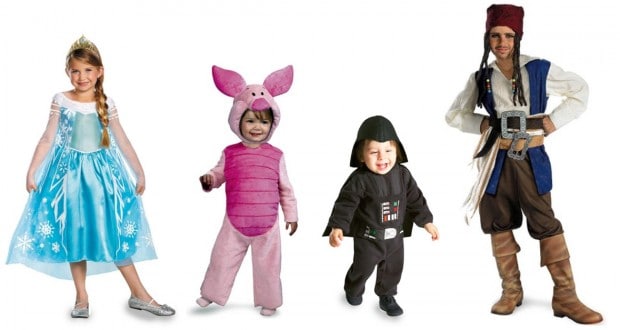 Halloween.  The one day of the year that your child is encouraged to blissfully frolic about their neighborhood on a quest for endless sugar while adorning a costume they’d probably just as happily wear around the house anyway (unless you insist on dressing them up as, say, a rotisserie chicken…then that last sentiment just won’t apply to you).  As Disney fanatics, we always welcome any excuse to incorporate a little of that Disney magic into our home, and Halloween serves as the perfect outlet to do just that.  From princesses to pirates to Pixar protagonists, there are countless ways to bring Disney joy from one doorstep to another and add some serious excitement to the face of your little one.  Here is a list of 11 wickedly cute Disney costumes for kids that you can purchase online.  What are you waiting for?!  Halloween is just around the corner! The Toy Story movies are among the list of highest-grossing Disney franchises so it’s no wonder that many boys want to be part of the Galactic Alliance, dressing as their favorite space ranger.  Sporting their purple space helmet and intergalactic bodysuit with jet-pack wings, they may not be able to fly but will certainly “fall with style.”  With this costume your child officially transforms into the coolest Gamma quadrant, sector-four “Buzz Lightyear,” ready to protect the Galaxy from Evil Emperor Zurg. Hold onto your fins, everyone, there is a whole lot of adorableness swimming around here with this vibrantly plush Nemo costume!  Hook one of these to ensure your little one won’t get lost but will stand out amidst the sea of other trick-or-treaters. Sprinkle a pinch of Pixie Dust and transform your little one into our favorite sassy Neverland fairy. This adorable green dress with glittered fairy wings will have Peter Pan’s best pal fluttering her way into your child’s heart this Halloween season. Star Wars. The pop culture phenomenon that has captivated both adults and kids alike will forever be a hit among costume-clad candy hunters during Halloween, everyone from Princess Leia to Yoda to Chewbacca—and all those StormTroopers in between—getting their day in the sun. The Walt Disney Company acquired Lucasfilm back in 2012, though there has been a very significant Star Wars presence at Disney’s Hollywood Studios even prior to that. Suffice it to say, fans of both Disney and Star Wars will agree that you don’t have to be a Force-wielding hero to don a great Halloween costume. Watch other trick-or-treaters cower in fear as your lightsaber swinging Sith Lord moves his way down the street. Pirate costumes have always been a popular choice, even more so thanks to Disney’s Pirates of the Caribbean films as well as Jake and the Neverland Pirates television series.  And Jack Sparrow, with all his fumbling, long-beaded dread-wearing hilarity, takes the cake for the most demanded among the swashbucklers. Avast ye, your little buccaneer can pillage and plunder all their favorite candy and treasure while “decked” out in this intricately detailed costume, savvy?  As authentic as this costume is, you better make a rum—er, run—for it and grab one! You’d be mad as, well, a hatter for not incorporating one of those quirky characters from Wonderland into your child’s Halloween closet.  From the Cheshire Cat to the Queen of Hearts to Alice herself, there is no shortage of fun and whimsical characters to choose from.  Whether you purchase the full costume or order bits and pieces (rabbit costume, vest & bowtie, oversized pocketwatch) and hodge-podge your very own white rabbit ensemble, you best get this costume soon so you won’t be late to that very important Halloween date! “For every job that must be done, there is an element of fun”…so when shopping for your child’s costume this year why not take a peek at this legendary magical nanny’s get-up? With the fluffy white signature dress, petticoat and red accents, this costume will bring the classic character to life and ensure your child has a “jolly holiday” this Halloween. For the squish factor alone, this pink plush ball of cuteness is worth every penny if you have a baby on the verge of toddler-hood.  What family wouldn’t “ooh” and “ahh” over this cutesy Hundred Acre Woods friend?  And just as adorable are the cuddly Pooh and huggable Eeyore costumes from the same website.  You might just have to “eenie-meenie-miney-moe” this one. Perhaps I’m cheating by grouping all these royal beauties together, but it certainly is tough to choose just one to reign supreme. Check out the links below to get your fill of imperial cuteness with these majestically grand costumes.  My personal favorite? The loveably naive princess with hair-for-days. This princess is certainly going to be towering high on the list with trick-or-treaters this Halloween season. With the charming and bedazzling Rapunzel costume, your daughter can “finally see the light” and have the “BEST DAY EVER” as she dances around and sings her way from one house to the next. Lend me your ears.  Let’s face it: Mickey and Minnie will never go out of style.  As official mascots of the Disney Company, they are loved and esteemed by families across the world.  Why, you may have even been a Mickey or a Minnie for Halloween as a child!  Gosh, it sure would be swell to see your little one transformed into their favorite lovable mouse! It looks like it’s going to be a cold one this Halloween—a very Frozen one, indeed.  It should come as no surprise that the Ice Queen’s costume is slated to be the most sought after one this year. And Elsa gets her own rank on this list because we all know she is a Queen, not a Disney princess. Having a hard time finding the frozen fractal-maker’s costume?  Check these out, and your daughter will melt even the most frozen of hearts.

And if money is no object, take a peek at this Elsa inspired ensemble: