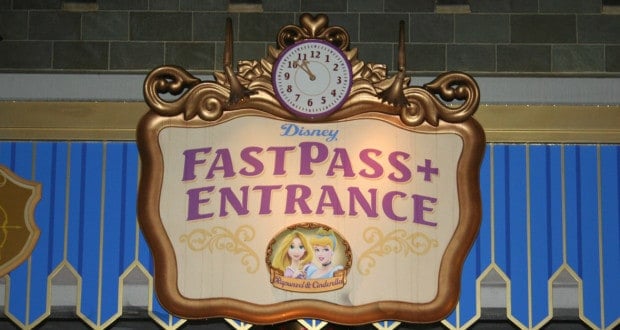 Gone are the days of the legacy FastPass where the fastest and nimblest of your party takes your ticket and runs around the park collecting FastPasses for everyone for the day. In 2014, Disney implemented FastPass+ which allows guests to schedule their FastPasses before visiting the parks. Since then, the FastPass system has seen many updates, adjustments, and more recently complete digitization.

Disney allows guests to make FastPass selections for three attractions initially. After using those FastPasses, guests may add an additional FastPasses one at a time.

This account can then be linked with your park admission, as well as your dining reservations. Each member of your family will need an individual account (children under 13 cannot have their own accounts, but have a profile that can be managed by one of the older family members).  Guests can link these accounts together through the “Family and Friends” option so one person can be placed in charge of reserving FastPasses for the party.

The MyDisneyExperience app allows guests to view maps, restaurant menus, park hours, estimated wait times, and much more. The app is the easiest way to organize your reservations and FastPasses. FastPasses are easily changed and added through the app.

Disney has limited your ability to park hop and use the FastPass system. If you plan on going to Hollywood Studios in the morning and go to the Magic Kingdom in the afternoon, you have to pick which park your FastPasses will be better used at. It is frustrating to those avid park hoppers. Guests ARE able to use your “one additional at a time” FastPasses at a different park. There have been rumors about Disney changing this aspect of the program in the future but no word as yet.

6. When You Can Use Them

FastPasses are only available during normal park hours. They are not offered and cannot be used during Extra Magic Hours.

5. When They Are Useful

If you are a person who makes it to “Rope Drop” every morning, you may want to consider not using your FastPasses initially. It does take a while for the parks to fill up and for the lines to grow for FastPasses to be deemed necessary. It may not behoove you to get a FastPass for Splash Mountain at 8 AM at the Magic Kingdom. That might be better used for Seven Dwarfs Mine Train later in the morning. If you do plan and find out that a FastPass isn’t necessary, you can always change your FastPass using the app to something else later in the day (subject to availability).

Like the old Legacy FastPass system, your return time is for an hour, but Disney does give you a buffer on your arrival time. They will allow you to arrive for your FastPass 5 minutes early and gain entry and they will give you a 10 minute cushion at the end in case you are running late at dinner or miss the tram in the parking lot.

Occasionally Disney Cast Member will trot out a paper FastPasses when there is an issue that forces a ride to be shut down. These FastPasses are generally good for any of the attractions that accept FastPasses in that park.

Disney allows you to schedule your FastPasses 60 days in advance if you are staying in one of the Disney resorts. If you are an Annual Passholder or are staying off site, you can make your selections 30 days in advance. Be aware of these timelines because some of the more popular attractions will run out of FastPasses if you are not proactive at booking them early (e.g., Princess Fairytale Hall and Seven Dwarfs Mine Train).

FastPass+ is here to stay and knowing some tips and tricks will let the system work in your favor. What’s your favorite thing about the FastPass+ system?