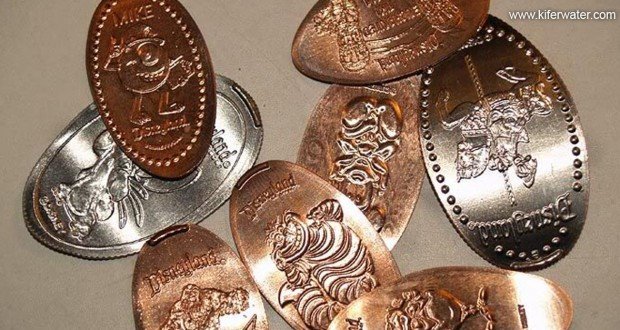 Disney World presents a number of opportunities for guests to become collectors of one item or another. Whether it’s Disney pins, figurines, Christmas ornaments, snow globes, or artwork, opportunities abound for you to add to your collection at stores throughout the resort. A great collectible for children or for Disney fanatics on a tight budget – or both – are pressed pennies. Each penny requires a commitment of just 51 cents and the machines are found throughout the resort, including many places that don’t require admission fees. But once you’ve made the decision to start collecting pressed pennies, you might wonder what the best way to proceed might be. Here are a few awesome tips for collecting pressed pennies:

For the best looking pressed pennies, you should use pennies that have a high copper content. Unfortunately, in 1982 the U.S. Mint went from making pennies with 95% copper to making copper-plated pennies that are just 2.5% copper. The rest is zinc, which can give your pressed penny unattractive silver-colored streaks. So before you head to the parks, dig through your pennies and make sure you’ve got coins with high copper content.

Tarnished or dirty pennies make for tarnished or dirty pressed pennies. Doing just a little bit of work ahead of time will make for much better looking souvenirs later. For the best ways to clean your pennies, the internet offers a lot of suggestions. Whether a pencil eraser, vinegar, baking soda, lemon juice, or metal cleaner works best is a matter of opinion and trial and error, but whichever way you choose, cleaning your pennies helps ensure that your pressed pennies will be brighter and more attractive.

United States law prohibits the destruction or defacing of currency only if it is done with malicious intent, which makes pressed pennies legal. However, Canadian law does not make that distinction. As we would never advocate illegal behavior, this suggestion is therefore hypothetical only. Hypothetically, Canadian pennies made before 1997 are similar in size to U.S. pennies and have a high copper content. Theoretically, they should work nicely in a pressed penny machine. If you had access to pre-1997 Canadian pennies, you might prefer to use them for your pressed penny collecting. Allegedly.

4. Get a Pressed Penny Album

What better way to display your Disney World pressed pennies than in a Disney-themed pressed penny album, booklet, or wallet? You can purchase these in advance of your trip or you can find a selection of them in stores at the Disney resort. Having your album ready to go is one great way to build excitement for your pressed penny hunt!

Because Disney has hundreds of pressed pennies to choose from across their resort, it would be a good idea to decide which pressed pennies you want to pursue. Collecting every penny available, even with their low cost, would add up to several hundred dollars. And that’s not including admission to some of the parks where many of the machines reside. Limiting your collection to specific characters or agreeing to buy pennies in only those locations where you had plans to go anyway will help keep costs down.

Don’t make the mistake of just assuming you’ll get pressed pennies when you happen upon a machine; some of them are really tucked away and quite inconspicuous. Instead, grab a map of pressed penny machine locations and plan your hunt in advance! There are several sites online where you can find accurate, detailed maps that reveal all their locations. Plotting your course of action ahead of time will not only reduce frustration in your penny pursuit, it helps build excitement for the trip!

At this point you may have decided which characters or series you want to collect, and that has the added benefit of helping you set your collecting budget. But if you haven’t quite decided which pennies you want to collect yet and would prefer to wait until you get to the resort and start acquiring them, you should still set an overall budget for your collecting. As with anything, if you don’t keep an eye on the expense it can begin to get away from you before you realize it. Some collectors address this by having the amount they’re willing to spend on hand in quarters and pennies even before they arrive. On the other hand, if your budget allows you to collect every pressed penny you see, go for it!

Okay, we admit that turning a crank might not be as exciting as riding Seven Dwarfs Mine Train. But if you want the whole family to be excited about collecting pressed pennies – especially your older kids – you’ve got to turn it into an event. That’s where planning in advance can help. By picking the pennies you want to collect ahead of time, choosing an album, and plotting your penny machine stops in advance, you’ll be able to work your collecting into your theme park visits with few hiccups. And be sure to set aside some time on your rest day to visit the various resort hotels where you have to go to complete your sets. But don’t just crank and run – you can check out the lobby, take a tour if one is offered, get some ice cream, listen to music, or even learn to draw! Each resort offers something different, and taking the time to look into it makes the whole experience more fun. And if your teen still won’t bite, tell them they can collect the Disney villain pressed pennies to match their mood!

9. Go to Out of the Way Places

Some of the pressed penny machines are in rather out-of-the-way locations. Don’t be afraid to go somewhere you’ve never been before. Walt Disney World has two miniature golf courses – Fantasia Gardens and Winter Summerland – that many people don’t even know about, let alone visited. And there are some great pennies to collect at those locations. The ESPN Wide World of Sports Complex is another location that may not be on your regular list of places to visit, but it too has pressed pennies just waiting for you to find!

If it’s not easy to do, you’re less likely to do it. There are a lot of tips online regarding how to make collecting pressed pennies easier. Be sure to check them out to see if any of them will work for you. One person mentioned that he has his hotel set aside a couple of rolls of quarters for him so that he doesn’t have to bother with carrying them on his flight. I don’t know if your hotel will do this, but it’s worth a shot! Also, there are tips on how to carry your coins to make them easier to deal with. Some collectors use film canisters or tube-shaped containers for candy or effervescent tablets to keep quarters in one place and handy to reach.

Not only should you clean your pennies to get them shiny before pressing them, many collectors advise that you should seal the elongated pennies after pressing them to keep them shiny forever. Some swear by wax polish while others claim that wood sealant works best. Your best bet may be to try them both with extra pennies that you press for the purpose of figuring it out yourself!

Do you have any tips for prospective pressed penny collectors that haven’t been covered here? What are they? And which pressed penny is your favorite?