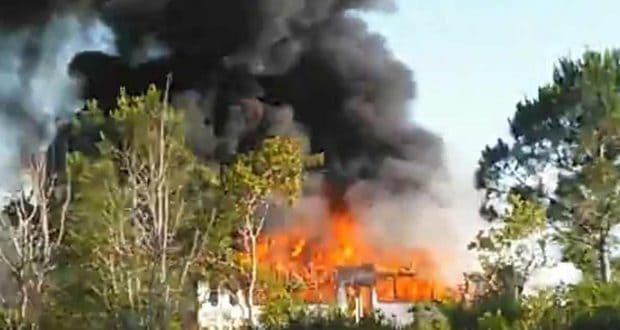 Around 6pm on Saturday, Reedy Creek Fire Rescue officials reported, a “head on” collision occurred between a bus and an Isuzu SUV on Sherbeth Road near Osceola Parkway.

Troopers say the driver of the SUV, identified as 36-year-old Megan Hester-Villalobos, of Groveland, was headed south in the northbound lanes of Sherbeth Road and hit the bus.

After the collision a fire erupted engulfing both the bus and the SUV.

The driver, her husband, Jesse Villalobos, 37 were flown to Osceola Regional Medical Center, and a child in the vehicle was brought to the hospital by ambulance

Eight of the 16 people aboard the bus were brought to Florida Hospital Celebration Health for treatment for injuries ranging from minor to serious., said Assistant Chief Bo Jones of the Reedy Creek Fire Department.

The bus is owned by Super Transportation of Florida LLC, and was carrying members of Disney University

Charges are pending against the driver of the SUV as the crash remains under investigation, troopers said.