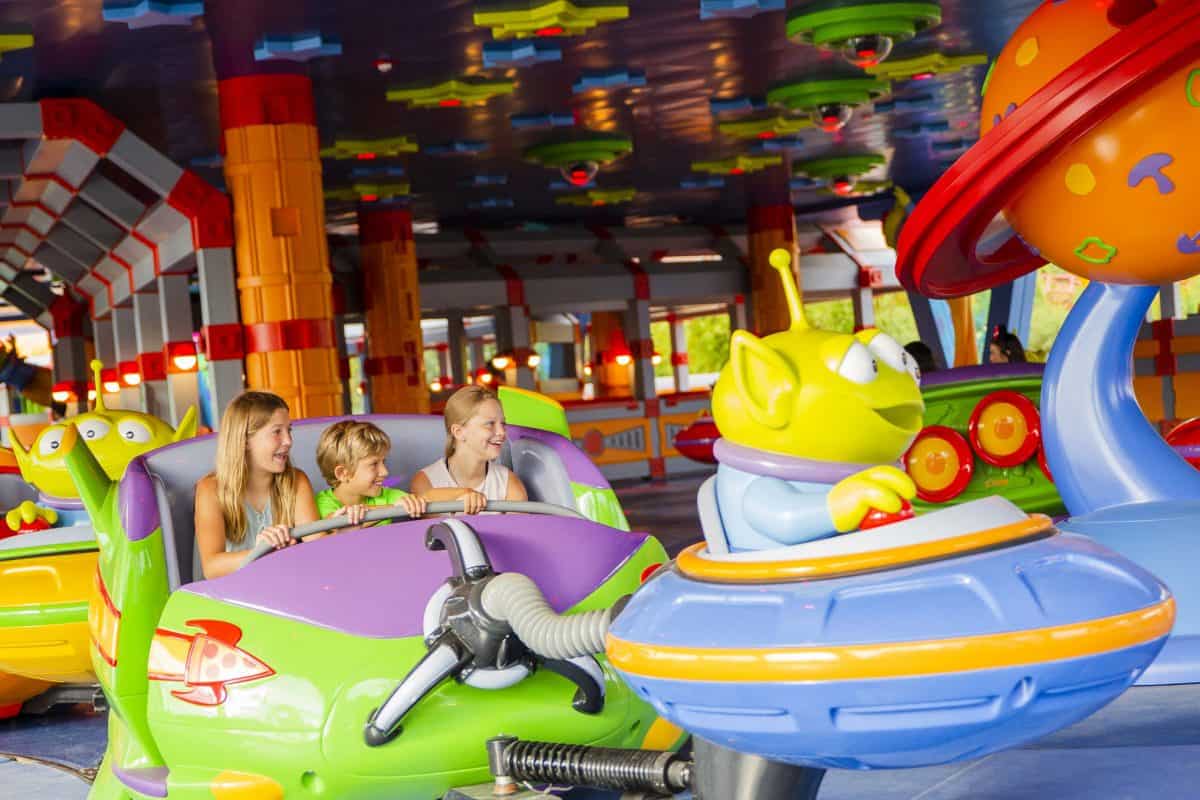 1. There are two must-do attractions!

The Slinky Dog Dash coaster ride will have you saying “Yee-haw!” Andy has put together his Dash and Dodge Coaster Kit and built a long track around the yard. And he decided to use Slinky Dog as the coaster’s ride vehicles. What could be more fun than a coaster that has you speeding around Andy’s backyard as you hang on tight to Slinky’s coils? And not too far from Slinky’s stomping grounds, you’ll find the Alien Swirling Saucers attraction, where you can board a spinning, swirling ride vehicle with the Little Green Alien Men at the controls. Hang on tight as you’re swirled, spun and slung around the huge ride platform!

2. You can meet Woody and the gang!

We love that Woody, Jessie and Buzz all have a place now where they can greet Guests, sign autographs and pose for pictures with their adoring fans. Before Toy Story Land opened, Guests could meet Woody and Buzz at Hollywood Studios, but not Jessie. In fact, the only way to be sure to see Jessie in the parks was to catch her in the “Move It! Shake It! Dance and Play It!” street party at Magic Kingdom. Stop by and greet your favorite Toy Storypals near the new entrance to Toy Story Mania!

If you’re a fan of Disney World’s hidden Mickeys phenomenon, you’ll love the hunt at the new Toy Story Land. But since they are “hidden” for a reason, we won’t spill anything specifically about the location of the covert mouse heads. But we will give you some hints—there’s one inside Woody’s Lunch Box, another one in the queue for the Alien Swirling Saucers attraction, one in the queue for Toy Story Mania, and there’s even one in the loading area for Slinky Dog Dash hidden in a huge drawing on the wall. Can you find your old pal Mickey in Andy’s backyard?

Andy and his family got Buster for Christmas at the very end of the first Toy Storyinstallment. We see Buster again in Toy Story 2(he comes in handy when Woody needs a ride from Andy’s room to the garage sale in the front yard). And Disney’s Imagineers made sure to include Buster in the new Toy Story Land. As you walk into the stand-by queue for Slinky Dog Dash, you will notice above you a gold medal that has a digital readout of the wait time for the ride in minutes. This gives you an idea of how long you’ll be in line. Take just a moment to look at the backside of that medal before you head on to the ride. You will read the words, “Buster 234 Main Street.” It’s the dog tag that hangs from Buster’s collar! But if you blink, you’ll miss it!

I don’t know about you, but I was really hoping that the new Toy Story Land would also include a resurrected version of the Pizza Plane restaurant, but alas, it does not. But Imagineers didn’t want us to swipe our memories clear of every thought of Pizza Planet. When you first enter the queue at the Alien Swirling Saucers attraction, you will see two robot guards (the same ones that stand guard at Pizza Planet in Toy Story). Both are holding round objects (pizzas). There is another nod to Pizza Planet in the artwork you see on the walls of the queue. Some of the artwork includes mushrooms and other pizza toppings in the background. We love that Pizza Planet wasn’t forgotten, but if you’re an Imagineer and you’re reading this, please bring back Pizza Planet! We diehard Toy Storyfans won’t feel complete until it’s there!

Cast Members inside Toy Story Land are referred to as toys. And every one of them has a “toy story.” If you want to hear their stories (their background as toys, how they got to Toy Story Land, etc.), simply walk up to a Cast Member—uh, toy—and ask, “What’s your toy story?” And then prepare yourself for a creative account of that toy’s journey. Some of the toys are from Al’s Toys Barn (and they’re glad they escaped!)  Others came from Amazon and other online companies. The stories are fun, and the fun is limitless—as are the opportunities for fun at this fascinating new land at Hollywood Studios.

Left 5 of 5 right
Next: 13 Things You Should Never Do on Your Disney Vacation