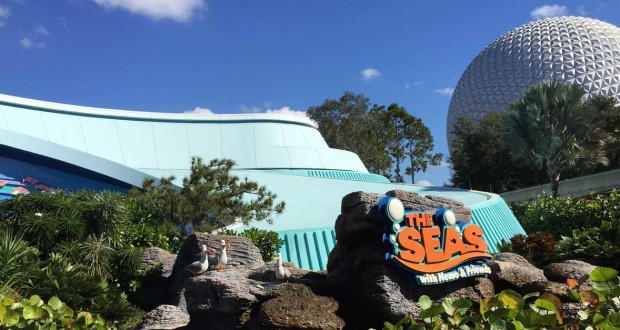 Located in Future World West at Disney’s Epcot, The Seas with Nemo and Friends immerses guests into a world of oceanic discovery. Spanning two floors, this aquatic pavilion is home to an extravagant array of marine life, including some familiar faces. Here are twelve facts about Seabase.

The Seas with Nemo and Friends was originally called The Living Seas. Guests used to be able to board a hyrdrolator that transported them to the ocean’s surface. Guests also had the opportunity ride in seacabs that took them on a journey around Seabase. The Living Seas opened on January 15th in 1986. It underwent its transformation to The Seas with Nemo and Friends on January 24th, 2007.

The aquarium is home to eighty different species of marine life and houses over eight thousand creatures. The tank itself is two-hundred-and-seven feet in diameter and contains over five million gallons of salt water. It used to be the largest aquarium in the world until the Georgia Aquarium surpassed its record.

10. The Seas with Nemo and Friends

At Seabase, guests can board a seashell, which can seat up to three individuals. Lap sitting is permitted, and those under the age of seven must ride with an adult. At Disney, the legal riding age of an adult is thirteen.

As guests board the ride, the décor takes them deeper underwater. It begins on a beachhead, which soon transitions under a fishing boat. Before guests realize it, they are fully “underwater” and boarding a seashell.

The pavilion also features an amazing and comedic show with Crush the sea turtle from Finding Nemo. Everyone’s favorite dude swims up to the “Window to the Ocean” and answers children’s questions about the turtle world. Crush even has his own special lingo when it comes to identifying children. Shirts are referred to as shells, hats are lids, and hair is fuzz. Crush also has a blast identifying children wearing “extra ears.” To make sure Crush calls on your kids, have them try and be the first to raise their hand. Crush usually goes for the first hand he sees, and it can only help to be extremely energetic. Children should have their question ready, so they do not draw a blank when called on. Turtle Talk with Crush is sure entertain your whole family.

As long as a guest is certified, he or she can scuba dive in the aquarium. Only sixteen people are allowed to dive per day, and do so in two groups of eight. Disney supplies all gear, and the cost to participate is $179.

Guests can also glide across the surface of the water, and snorkel through the expansive aquarium. This activity costs $145, and is suitable for tweens, teens, and adults.

In the center of Seabase, guests can watch as a scuba diver enters a lockout tube. Here one can learn how a scuba diver’s equipment operates, and how water pressure affects the body.

For $199, guests can swim alongside the playful dolphins that inhabit the tank. In waist-deep waters, guests get up close and personal with these beautiful creatures. This experience is limited to no more than eight guests per day.

Test your knowledge of marine life with these fun little mini games. The quizzes feature two levels of difficulty, and can be found in two locations: The waiting room for Turtle Talk with Crush, and the upper observatories.

There are two hidden Mickeys within Seabase, and both are located in the waiting area for Turtle Talk with Crush. They are intricately hidden on the grand mural featuring characters from Finding Nemo. The first can be found just above the eyes of Peach the starfish. The second is located against the purple coral in the lower right corner of the picture.

Backstage, there is a lounge used for cast member meetings, weddings, and conventions. The room has an extraordinary view of the aquarium. and also features an acrylic glass piano.

The Seas with Nemo and Friends is just one of many pavilions just waiting to be discovered at the Walt Disney World Resort.