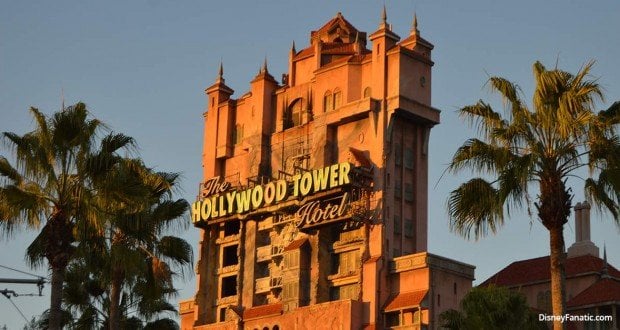 If I were stranded on a deserted island and could only take one Disney attraction with me, hands down Tower of Terror would be it. True story. I was eleven years old when I experienced my first “free fall” on the doomed elevator located in the dilapidated and haunted Hollywood Tower Hotel and have been captivated ever since, some 20 years later, by the nervous anticipation, breathless euphoria, and otherworldly wonder this attraction offers.

This is easily my favorite ride on Disney property, and I am just as impressed by the story and details surrounding the attraction as I am about that stomach-forfeiting plunge. Combining the eerie elements of the popular Twilight Zone television series with the detail-driven ingenuity of Disney Imagineering, this thrilling attraction strikes the perfect balance between heart-racing expectation and spine-tingling delight. If you’ve never felt the adrenaline rush of a faster-than-gravity elevator plummet 13 stories high, then you are certainly missing out on the ride of your life. There is so much more to this ominous, imposing tower than those rapid drops, however, and we have 13 facts to prove it. Let’s countdown these frightfully fun findings surrounding the attraction at Disney’s Hollywood Studios together!

The question isn’t, “Will my elevator drop?” but “How many times?” In this ride, the sophisticated and complex computer system running this attraction chooses for you! Yes, that creepy old Hollywood Tower Hotel is in control of your drop destiny. This is a far cry from the original attraction that debuted in 1994 with only one big fall! Because the computer system randomly generates the number of drops, the only true guarantee is that you will plummet more than once!

This looming tower is one of the tallest attractions at Walt Disney World, standing at exactly 199 feet (second only to Expedition Everest which peaks at 199.5 feet!). One foot more and this structure would, by Florida law, require a flashing red aircraft beacon on top.

The storyline created by the Disney Imagineers is incredibly chilling, inspired by the Twilight Zone series. All 156 eerie episodes were viewed before the frightful, fictional tale was fashioned and it goes something like this: On a stormy Halloween night in 1939, five individuals—an elegant honeymooning couple, a child actress, her nanny, and a bellman—entered an elevator in the prestigious Hollywood Tower Hotel. As the elevator ascended it was struck by lightning, sending it plummeting to the ground floor, yet the bodies of the victims were never found. Though the hotel has long since been abandoned and remains in its eerily original, untouched state, the missing individuals are believed to still be roaming the grounds, inviting unsuspecting visitors to enter the Fifth Dimension with them.

As you plummet downwards, you get the sensation that you are free-falling. You are, in fact, falling at a rate FASTER than the speed of gravity as your AGV (Autonomous Guided Vehicle) is being controlled by motors and pulled up and down by cables.

Look closely. Navigating the Hollywood Tower Hotel with a keen eye will reward you with several Hidden Mickeys. Study the antique lamp resting on the concierge desk in the lobby. Let your eyes wander the walls in the boiler room where you’ll find a familiarly shaped water stain. The little girl in the footage is holding a Mickey Mouse doll and you might even notice the Fifth Dimension scene with swirling stars forming a Hidden Mickey just before they disappear. These are just some of the many Hidden Mickeys to discover!

7. A Nod to Twilight Zone Episodes

The Imagineers pay homage to many of the Twilight Zone episodes with objects and details scattered throughout the attraction. A reference to the episode “Time Enough at Last” is made with a pair of glasses found in the lobby that contains broken lenses. In the episode, a man named Henry loves books but is prevented from reading them by the people in his life. When he becomes a lone-survivor in a post-apocalyptic world and has all the time in the world to read his beloved books, the lenses in his glasses shatter leaving him virtually blind. There are many other references too. The Library contains a book titled To Serve Man, taken from the episode of the same name. There is an inspection certificate to the left side of the elevator as you board which is signed by “Cadwallader,” who is a character from the episode titled “The Escape Clause,” eventually revealed to be the devil. As the elevator rotates towards the exit after your final drop, look for the slot machine (a nod to the episode “The Fever”) and a creepy ventriloquist’s dummy (a nod to the episode “Caesar and Me”).

The Cast Members working this attraction wear costumes made to resemble a 1930s bellhop. Masterfully designed with incredible attention to detail, the cost of a single bellhop costume runs over a thousand US dollars, making it one of the most expensive Cast Member costumes on property.

Because the Tower of Terror building is so tall, you can see it peering over the trees from other places around Disney property. When crossing the bridge that leads to Mexico in Epcot’s World Showcase, a glance across the lagoon will give you a perfect view of Morocco and of the Tower of Terror positioned directly behind it in the distance. It blends in to the Moroccan theming quite exceptionally, so much so that at first glance you might not even notice the separation. The Tower of Terror was given a Moorish feel and painted a color that wasn’t exactly accurate to 1930’s Hollywood just for the sake of blending into the background of this World Showcase country.

For quite some time now, on-ride photos taken of passengers during some of the most thrilling moments of an attraction have been available for purchase. Disney upped the ante by providing a new way to capture your magical memories. They began offering on-ride video footage for some of their more popular rides, including Tower of Terror. In fact, the Tower of Terror was the very first ride at Walt Disney World to offer on-ride videos! This feature is available only to those who have a Magicband and an active Memory Maker photo package on their MyDisneyExperience account. The edited video will automatically be uploaded to your page and can be viewed and shared by anyone linked to your MyDisneyExperience account.

The corridor scene which reveals the slowly motioning apparitions of the five individuals trapped in the Fifth Dimension is created using the same technique found during the ballroom scene of dancing ghosts in The Haunted Mansion attraction. Coined Pepper’s Ghost, this trick employs simple mirroring techniques which help create the illusion of three-dimensional, translucent “ghosts.”

The idea of the Fifth Dimension was inspired in part by the “Little Girl Lost” episode in the Twilight Zone television series. In this episode a little girl named Tina accidently falls into another dimension through the wall behind her bed. The entire rest of the episode has her parents trying to locate her as they can hear her voice but are unable to see her. The Tower of Terror attraction runs on the premise that those five unfortunate individuals from the ill-fated elevator have passed through to the Fifth Dimension and remain trapped there forever.

Ever noticed that the plaque next to the lobby’s concierge desk reveals that the Hollywood Tower Hotel was awarded 13 diamonds from AAA, when in fact the highest AAA rating a hotel can receive is 5 diamonds? Perhaps you noticed the sheet music resting beneath an old trumpet in the Library room which reads the music for the song listed at the top, “What! No Mickey Mouse?” You’ll find a copy of “Four Pages of Hilarious Star Caricatures by Walt Disney” featured in Photoplay Magazine on the lobby’s concierge desk. The lobby is outfitted with many genuine antiques and furniture, won in auction houses for use in this attraction. There is a Mahjong game on a table in the lobby, set in an accurate manner to give the impression that it had been abandoned mid-game. These intricate details prove that there are many fascinating things to uncover while standing and waiting in the queue.