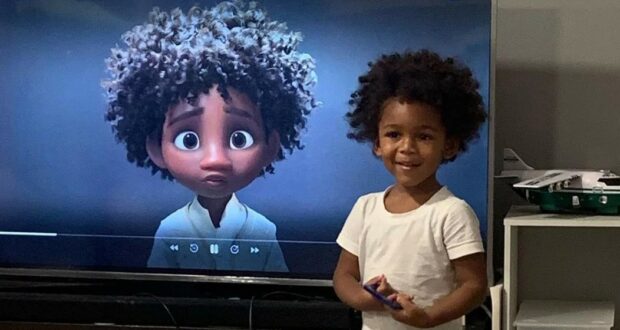 Disney’s newest animated film, Encanto, is taking Disney film fans by storm. With the film recently released on Disney+, there’s been an overwhelming response with nothing but positive notes for the film. From the storyline to the music and everything in between, it’s a success for Walt Disney Animation. And one little guy thought for sure he was seeing himself on the screen!

Kah Brand, the mother of a sweet two-year-old boy named Kenzo, was with her son watching Disney’s Encanto when the young Encanto character, Antonio Madrigal, popped up on the screen. According to a quote from the mother to POPSUGAR, “He seemed to be in awe, just smiling and staring at the screen. Then he stood up and looked back at his dad and me, still smiling. For him, I truly believe that he thought he was seeing himself because of the resemblance between him and Antonio.”

Kenzo’s mother continues with “As a mom, I’m always trying to capture ‘these’ moments. I was amazed at his reaction. It just truly made me smile and my heart happy. It was the impact of feeling seen. It is essential for Black children to feel seen and to be connected to positive and empowering images for their self-esteem.”

RELATED: Fans Have Found a Hidden Clue in ‘Encanto’

Kah Brand adds, “But these characters weren’t around,” she said, referencing her own generation. “We didn’t have this growing up. What’s so special about Encanto was that it didn’t stop at just showing us brown characters. It showed the diversity in hair textures and skin tone. I’m so grateful for moments like this because I’m aware of its impact, especially for brown boys and girls. It brings joy to our family. There’s power in representation and magic in creativity. This generation and future generations will experience inclusivity because the film industry is moving in a direction that reflects the true diversity of our world.”

@katchingupwithkenzo took to Instagram to share the photo that is now going viral with, “Check Kenzo out in the new Disney Movie “Encanto” lol #representationmatters #ThankYouDisney #Encanto #EncantoDisney #Disney #NYMMKids”. Here are the adorable photos in the Instagram post below:

What an adorable story! We’re thankful the mother thought to share the image for all to see. We’re sure she didn’t expect it to go as viral as it has, but Kenzo’s sweetness makes the story too wonderful to pass on. And if Kenzo begins communicating with animals as Antonio does in the Encanto, then we’d like to know!