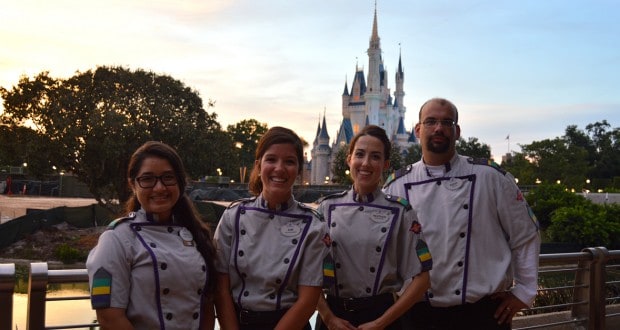 4 Awesome Behaviors We Can Learn From Disney Cast Members

Ask anyone returning from Disney for their favorite moments from their trip, and invariably the story that emerges in one way or another, involves Cast Members. If we all took a cue from these carefully trained individuals, what a wonderful world it would be! My recent stay may give you some food for thought – I sure hope so.

The first Wednesday of November, I volunteered with ‘Dreams Take Flight of Montreal’. A nonprofit charity devoted to providing a one-day trip-of-a-lifetime to children with special needs. After the big Air Canada jet lands, I meet my Canadian team for the day and escort them through the Magic Kingdom. This year, I was one of five adults paired with five particularly challenged children. Two of the kids were in wheelchairs, but each had unique needs. Sorry I can’t show the children’s faces to protect their identities, but in your mind’s eye I hope you’ll imagine what I saw that day – it all made me want to be a better person at work, at home, at WDW, and everywhere I go. Below are a few behaviors demonstrated by Disney Cast Members that we could all display in our daily lives:

4. Pay attention to each person you meet. Can you imagine what it’s like to be one of the Characters who pose for photos and sign autographs all day long? Tinker Bell was our first stop of the day. One little boy reached down and tentatively fingered the furry ball on top of Tink’s green slippers. She didn’t miss a beat. “Do you like my shoes?” she inquired in a fairy-pitched voice. “Would you all like to touch them? “ Wham! Every child came over to touch Tink’s slippers. Then she chatted with each child as she signed autographs and posed for pictures. One of the boys started touching her wings, and Tink engaged him immediately: “Are you tickling my wings?” she giggled. The boys were immediately entranced. After the photos, one little boy went back to give Tink a kiss on the cheek. (Yes, I was close to tears!)

But the Cast Member who impressed me most was Mickey Mouse. Mickey seemed to quickly get a sense of each individual child’s personality, and he played right into it. For example, the smallest boy in our group is wheelchair-bound and non-communicative. Mickey immediately fell to one knee, reached over to tickle the boy, began talking (yes, Mickey now talks to you), and the next thing we knew, the child’s entire face lit up and we heard actual belly laughs from him! The boy reached over to tickle Mickey back, and Mickey giggled and continued talking with him. It was amazing! Another boy likes to act cool, and Mickey immediately engaged him by crossing his arms “gansta” style and standing back-to-back with the boy. It was hilarious, and we have the picture to prove it! I was so touched and impressed that these Cast Members would be so patient and show so much interest in each individual child.

3. “If you see trash, pick it up.” Walt wanted his parks to be the cleanest in the world – and that can only happen if we each play our part. Whenever I’m at WDW, I watch for the street cleaners and washroom attendants and I make a point of saying to them, “Thank you for what you do – YOU are the reason this park stays so beautiful.” Since part of their job is to be invisible, these Cast Members don’t expect to be thanked – but I’ve seen, over and over again, how much it means to them to be acknowledged by a Guest. And it’s up to all of us to throw away our trash in the receptacles that have been thoughtfully placed inside every Counter Service restaurant and throughout the public areas of Walt Disney World.

2. Listen respectfully to each request/complaint. If you’ve ever gone to Guest Relations with a problem, or you’ve ever stopped a Cast Member to ask directions, you probably noticed how cheerfully, politely, and respectfully you were treated. Shake off defensiveness and listen to an upset person’s issue – you may defuse a blow-up before it occurs.

1. Go above and beyond. WDW Cast Members are encouraged to perform at least one magical moment every day – this is above and beyond their normal duties. On my day with the Canadian children, we had one “above and beyond” experience that will live in my memory for a long time. The five pairs of us were in five clam shells on Ariel’s Under the Sea voyage, and as we came to the end, the Cast Member told each of us, “Please stay seated – you’re going to ride it again!” I’m not sure the children realized what a treat this was, but all five adults were bowled over. My take-away from this is “don’t just do your job – give a little extra whenever you can.”

Shakespeare wrote, “All the world’s a stage, and all the men and women merely players.” Walt would approve: we’re all Cast Members in our daily lives. If we each play our part to the best of our abilities, what a wonderful world it could be! Full time HR director because I love making people happy. WDW holds a piece of my heart, so I visit as often as possible with friends I’ve made via the Mouse. (Yes, there are others like me!) I volunteer with Dreams Take Flight of Montreal, which flies children with special needs to the Magic Kingdom for one special day. Little known Disney trivia: Cinderella Castle was named for ME.