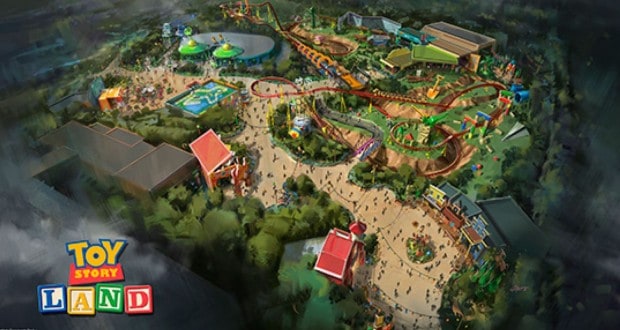 Hollywood Studios is still evolving into its new self with construction slated to being “on-stage” very soon. The area surrounding Echo Lake and the Indiana Jones Stunt Spectacular will be transformed into Star Wars Land. Guests will also be able to look forward to the construction of Toy Story Land, as well. Here are five details to know about the new area of the park!

5 – Slinky Dog Roller Coaster – Toy Story Land will be home to a new rollercoaster that will be much more family-friendly than the Rock and Roller Coaster located at the end of Sunset Boulevard. In information released so far, this rollercoaster will be family-friendly similar to Seven Dwarfs Mine Train. The Studios is certainly in need of some more kid-friendly attractions and this will be the perfect addition – even the fully-grown among us can’t wait to take a ride on this coaster!

4 – Aliens and Claw Ride – this ride is being marketed as a spinner-type attraction, so we are thinking it will be similar to a Dumbo-style ride or something akin to Mad Tea Party, but we are confident that the Imagineers will be able to wonderfully create a ride that will be great for the kids, as well as the adults. We also can’t wait to see the theming for this ride!

3 – Locale? – with the rash of closures that have been announced in the last year, we are left with some questions as to how Imagineers will pivot the land into the Studios. One possibility is that Toy Story Midway Mania and Pixar Place will be the entrance to the land with the new attractions and space occupying some of the space from the Backlot Tour, as well as backstage areas used by costuming. Another possibility is that the land will occupy the space now taken by One Man’s Dream and Voyage of the Little Mermaid and more backstage areas. We are keeping our eyes peeled to see what the plan is!

2 – New Pizza Planet – Pizza Planet has been shut down for a long refurbishment and it is scheduled to re-open in November, but likely it will be in a new spot near Toy Story Land. We are also left to wonder if there are going to be any new dining places to eat at. And that also leaves us wondering what is going to happen to the old Pizza Planet space?

1 – More in the Works? – between the area dedicated for the Star Wars expansion and where Toy Story might land, we are left with a third area that still hasn’t been touched – the Streets of America area and Lights, Motor, Action. This is a sizable footprint and a lot could be placed in that area – we are hoping it is a third, unannounced expansion to the park! What would you like to see in this area?