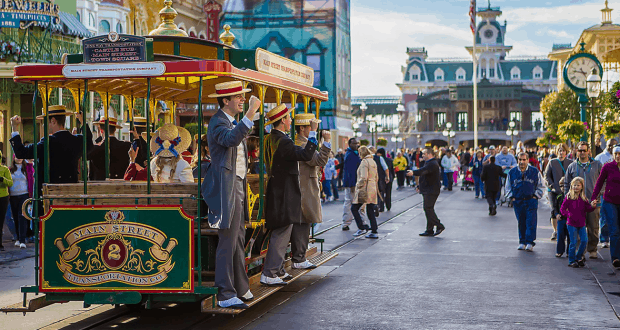 The crown and jewel of Walt Disney World is, without a doubt, Disney’s Magic Kingdom. This is where it all began and it continues to be the resort’s most popular park, bringing in anywhere from 16 to 18 million guests a year. While there is so much to do while at the park, there are a few experiences that would be a shame to skip over. Here are five experiences you don’t want to miss at Disney’s Magic Kingdom:

5. Dapper Dans/Trolley Show– When I see people walk past these experiences, I feel bad for them because they’re truly missing out! The trolley show on Main Street is such a delight to watch. The dancers are so talented and their high energy puts me in such a good mood and starts my day off on a positive note. Plus, their costumes are so adorable! The Dapper Dans are such a treat to watch if you can catch them on Main Street. Their voices are heavenly and, again, the costumes are adorable! They truly capture the essence of Magic Kingdom.

4. Classic Disney Attractions– I am a sucker for the classics, even if some of them are a little outdated. Attractions like ‘It’s A Small World’ and ‘Walt Disney’s Carousel of Progress’ are too good to pass up when you’re spending a day in the kingdom. Though they’re older and aren’t as ‘fun’ as some of the other attractions, it’s nice to enjoy them and see where everything started. But, I also love getting to ride attractions such as ‘Space Mountain’ and ‘Pirates of the Caribbean,’ which have also been around for a while.

3. Character Meet and Greets – One of the best parts of going to any Disney Park is getting to meet characters, but it’s even better in Magic Kingdom. Disney’s most popular theme park is home to many beloved characters, and they’re all waiting to meet you. I can’t go to Magic Kingdom without meeting at least one character, and they are always the best interactions. Gaston is one of the best meet and greets throughout Disney property, in my opinion, and meeting him is worth the wait. I also love heading to Princess Fairytale Hall and meeting my favorite princesses, including Rapunzel and Cinderella. You can also meet Mickey Mouse, the one who started it all, at Town Square Theater on Main Street, and he may even talk to you!

2. Disney’s Festival of Fantasy Parade– This parade is beyond magical and if you haven’t seen it, make it a point to see it on your next trip. With infectious music, beautifully designed floats and costumes, this parade is a Disney fan’s dreams come true. This is one of the best parades Disney has put together in recent years and I love that it includes so many different characters from so many Disney movies. The best places to watch it are in Frontierland where it steps off and along Main Street so you get a perfect view of the castle. Be sure to have your camera out—there are plenty of photo opportunities!

1. Celebrate the Magic and Wishes– This is the ultimate Disney experience and it’s my favorite nighttime show by far. Celebrate the Magic is a projection show on the castle that incorporates scenes from various Disney movies and pairs it with a beautiful soundtrack. The tangled scene during this show is my favorite! Then five minutes later, the sky above Cinderella Castle comes to life with fireworks as your host Jiminy Cricket narrates. The score includes plenty of familiar music from popular Disney movies and if you watch Wishes enough, the soundtrack will be engrained in your mind forever. It’s the perfect way to end your day at the Magic Kingdom.

Disney’s Magic Kingdom has so much to offer to every guest that walks through its gates, but so much of it can be overlooked or simply forgotten when you have limited time. These few experiences are worth making time for as they capture what makes Disney…Disney! From parades to fireworks to classic attractions, you cannot go wrong if you do anything on this list. Be sure to incorporate these things into your plans the next time you find yourself in the most magical place on earth!