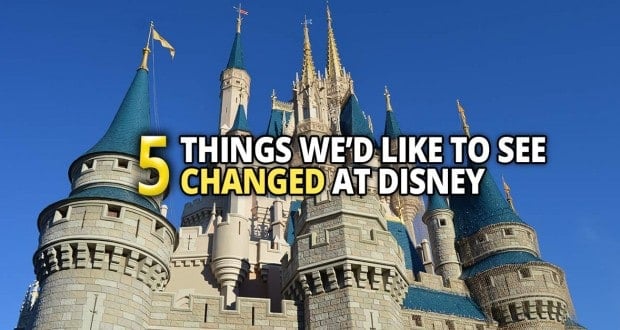 5 Things I’d Like to See Changed at Disney World

My first year as an Annual Passholder is coming to an end. I fully intend on renewing and continuing to explore and enjoy all that Disney has to offer. In my first year as a passholder, I re-discovered attractions from my youth that I loved (and still do) like Splash Mountain, I was able to stay at five different on-site resorts to truly appreciate the entire Disney experience, and I set a course to eat at every on-site restaurant (many, many more entrees still need to be eaten for me to accomplish that task). However, in all of my time at the resort, I’ve had plenty of times to make observations about things that need tweaking, adjusting, editing, or alteration. The following is my list of five things I’d like to see changed at Disney World.

When the new FastPass+ system was introduced in January 2014, reviews were mixed. Some reviled this new system that no longer accounts for your ability to speed walk the park to collect paper FastPasses. Others, like me, appreciated the ability to geek out on scheduling your trip and soothe their obsessive-compulsive tendencies at the same time. Even though I am firmly in the camp that loves the new system, there are two changes that I’d like to see.

5. First, can we get more than 3 FastPasses to begin with? Disney makes FastPasses available for booking 60 days in advance (as a resort guest) and 30 days in advance (for day guests). Sadly, most of my trips to Disney aren’t planned much in advance – generally, I will make the decision to go about 3 weeks in advance. I usually don’t have an issue grabbing a FastPass for whatever ride that I want, but I have run into issues on a few occasions. I don’t think I’ve ever seen MyDisneyExperience show me any availability for Seven Dwarfs Mine Train or for Princess Fairytale Hall, but it has offered me Living with the Land as an option far too often. I get that Disney cannot allow unlimited FastPasses and they have to create an artificial demand for the less popular attractions, but I feel they should be able to offer 4 or 5 FastPasses in advance. I’d love to know before walking through the gates at Magic Kingdom when I will be walking onto Big Thunder Mountain Railroad, Splash Mountain, Space Mountain, Haunted Mansion, and Peter Pan’s Flight.

4. Second, if Disney is going to hamstring me with only 3 FastPasses in advance, let me spread my FastPasses between parks. I generally park hop when I am at Disney and have done three parks in one day. When you park hop, you generally are going to a park for a specific purpose or reason – Magic Kingdom always includes a trip to Splash Mountain and a stop for a Mickey pretzel with cheese in Frontierland. If I go to Epcot, I want a grapefruit beer from Germany and want to take flight on Soarin’ or take a spin on Test Track. If I end up at Hollywood Studios, I always stop by Tower of Terror. So, what is the problem with me getting my three FastPasses between the parks? You can already, in essence, accomplish that with Disney allowing you additional FastPasses after you use your initial three, so where is the harm in allowing me that opportunity up front?

I love ADRs. I’ve lucked into some good reservations by checking shortly before my trip, but lately (with the increase of holiday travelers), I have found it difficult to get an ADR at my favorite restaurant (Sci-Fi Dine-In). Disney doesn’t reserve all of the tables in advance. They assume that not everyone is neurotic about planning like I am. They do reserve some tables for guests who walk up on that day, and I have been able to get into restaurants this way, too, but what I’d like to see changed is if Disney can provide information to guests via the app about how many walk-up reservations exist for that day. I can’t imagine the technology behind calculating that information is that difficult. Although, I could see this change causing me heartbreak when I learn there are no walk-up reservations available at the Garden Grill as I am walking through the parking lot at Epcot. Even if this feat cannot be accomplished, it would be extremely helpful if we can find out wait times at the restaurants before heading there.

When you stay on-site, your MagicBand is your room key, FastPass holder, admission ticket, and credit card. The credit card you place on file to cover your incidentals can be used in the parks as a cashless payment system – I’ve been able to use it and I enjoy the ease of being able to pay for everything quickly and easily. Unfortunately, even as an annual passholder, I cannot link a credit card to my MagicBand when I am just visiting as a day guest. The silver lining of this is that psychologically, I will spend less money when I have to go through the physical exercise of taking my wallet out, extracting my credit card, and handing it to the cashier.

Disney seems poised to address some of these very soon – changes to the FastPass+ system have been ongoing since its introduction. Others may take a little longer to come to fruition and some never may be.. What ideas do you have about things you’d like to see changed at Disney World?