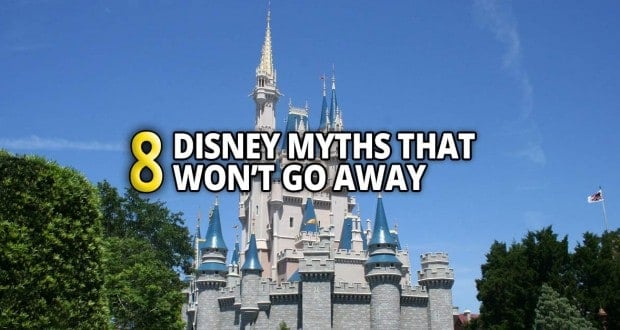 Urban legends, folklore, myths. We have all fallen for them at one point or another. They prey on our emotions, causing us to readily share and pass along the story to another without checking out their ultimate validity. There are MANY times I come across a shared Facebook status or a forwarded e-mail that carry an alarming or unsettling message chalked full of warnings. I usually sigh and shake my head, because all too often people are eager to unknowingly share what a simple Google search would have confirmed a debunked “urban legend.” These myths spread like wildfire due to the outlandish and often bizarre—or sometimes emotional—nature of the story and the storyteller in us can’t wait to pass it right along to the next person without confirming its legitimacy. Disney isn’t exempt from these mind-boggling myths and some of them are so preposterous that you wonder if people actually believe they are true. Nonetheless, urban legends are hard to kill and they are often reincarnated, ready to entice you with their elaborate tales that may require more imagination than Figment himself could ever muster up. Some of these myths are preposterous and some are plausible but the common denominator is they all just keep re-emerging and circulating despite their untruth. Let’s take a look at 8 brow-raising myths about Disney that just won’t go away.

Nope, I’m not referring to the radically popular Disney film, I’m talking about the myth that Walt Disney himself was cryogenically frozen a la Mel Gibson in Forever Young, preserved to be resurrected in a future that allows for this kind of controversial technology. If you find yourself scratching your head at this one, you’re not alone. Regardless, I’ve heard this rumor about as many times as I’ve seen the movie Frozen (i.e. A LOT) as well as the variants which insist he was buried under an actual Disneyland attraction. He wasn’t—his cremated remains are buried with family in a plot located at the Forest Lawn Cemetery in Glendale, California.

Poor Donald, he can’t cut a break…even in Finland. The story goes that in 1977 Finland put a ban on Donald Duck because he doesn’t wear any pants. We are “crying foul” (or should we say “fowl”) on this rumor as it never had any validity. The real story behind the myth goes that a politician in the city of Helsinki made the mere suggestion during a board meeting of youth affairs that the city economizes its monetary resources by substituting the purchase of popular Donald Duck comic books in favor of hobby and sport publications. His proposal was accepted and as the years passed and the story grew legs, exaggerations were made and the truth was stretched. Soon, Donald Duck with his bare behind and questionable marital status was headlined as being completely banned from the country! Though this rumor has been officially debunked for decades now, you’ll still hear it spread as truth today.

During The Haunted Mansion ride as your doom buggy moves through the graveyard scene you see several singing busts projected with the heads of singing men and…wait…could that be….is it…Walt Disney? No actually, it isn’t…but you aren’t the first one to think it is. The myth has spread wildly, and many park goers are convinced it’s Walt himself serenading them. But this rumor is a “bust” and the look-alike is actually Thurl Ravenscroft.

I remember seeing a Pinterest image run through my feed of a photo displaying a costumed Woody and Jessie lying on the ground with a caption that read something like, “When you see Toy Story characters at the theme parks yell, ‘Andy’s coming!’ and they’ll stop what they’re doing and drop.” Crazy fun, right?! Not when guests are shouting it every five seconds. Could you imagine what their costumes would look like after a day of going limp and falling to the ground at every mention of Andy’s name? So no, they will not fall like a sack of potatoes if you shout this at them. Go ahead and try it if you don’t believe me (or maybe don’t, as I’m sure the Cast Members are so over it). There is something that makes this myth not so incredibly preposterous though—some Cast Members will confirm that there was a time when the characters did indeed do this but once that meme went viral, they had no choice but to stop. I couldn’t tell you for sure that it’s true—but that telling image makes me think perhaps it was for a short while.

4. No One Officially Dies on Disney Property

I read something awhile back along the lines of guests being declared dead only after they have been removed from Disney property. As the rumor went, Disney, in efforts to keep a squeaky Utopia-like image where nothing bad ever happens, requested that emergency personnel wait until they crossed Disney borders to declare anyone dead. Perhaps this myth was perpetuated by the idea that though people may die on property, they won’t receive an official declaration of death until they’ve reached the hospital. This just isn’t the case. And though Disney is a massive empire with major influence, even they don’t get to make these sorts of lofty decisions. Whether their public relations department ever attempted this or not, I have no solid evidence, but records reveal that Cast Members and guests have, unfortunately, been declared deceased on property in the past.

3. Cinderella’s Castle Can Be Broken Down in Case of a Major Hurricane

The legend states that in the event of an approaching hurricane, Cinderella’s Castle can be broken down, piece by piece, to protect it from disastrous winds and safely stored away. Though I have no doubt that if any theme park would have the capability to do something of this magnitude that it would be Disney, this rumor is just a silly myth. The Castle was built with the notion that Florida does see a good share of serious and damaging weather and is meant to withstand it. Every steel-braced frame is encircled by 10-inch thick reinforced concrete which is then decorated with fiber-reinforced gypsum plaster and fiberglass. Hurricanes have come and gone and the Castle still stands…and no, it wasn’t taken apart like a giant Lego toy.

Earlier this year I was at The Magic Kingdom, getting ready to leave the Baby Center with my little one when I got to talking with one of the Cast Members. The Wishes Fireworks show was getting ready to begin and she let me in on an overwhelmingly emotional tidbit. She stated that the part of the song that is sung by a little girl (“Star light, Star bright, First star I see tonight…”) is performed by a girl whose dying wish was to be part of Disney forever and they granted it by allowing her voice to be used in this nightly show. That night I was full-on blubbering with this newfound information. How moving and how sad the idea was to me! We all know Cast Members have a tendency to freely share information with guests and I have learned in my day that not every Cast Member has their facts straight (example: A while back, a server at a Disney restaurant convincingly shared with my table that Hollywood Studios was replacing Aerosmith’s Rock n’ Rollercoaster ride with a Hannah Montana attraction…thank HEAVENS he was misinformed!). I did what I had to do—I Googled the Wishes claim and realized I wasn’t the only one to have heard this story. I also learned that this rumor was not at all true. What makes this myth mind-boggling is not the idea that Disney would do such a thing (because it indeed would be incredibly touching AND they are already highly involved with The Make-a-Wish Foundation), but that someone would create such a rumor to prey on guests’ emotions like that. That being said, I believe that the Cast Member was fully convinced that she was sharing truthful information. And perhaps it was all innocently mixed up with the fact that at one point Disney did create a CD where all the profits went to the Make-a-Wish Foundation and the Wishes song was included in the line-up. It wouldn’t be hard to see how the story would get confused and distorted along the way. But to set the record straight—the voice you hear in the Wishes Fireworks show is that of Charity Farris, a child voice-over talent who is alive and well today.

This is probably one of the most egregious offenders of them all. I’m sure you’ve seen this quote before which is floating around every social media site imaginable and is notoriously attributed to Walt Disney. How could it not be?! It’s a wonderfully inspirational message that just screams, “Walt!” and everything on the internet is always true. Ha! The quote is actually a widely spread falsification. This quote was, in fact, written by Imagineer Tom Fitzgerald as a line for the Horizons attraction many years after Walt’s passing. Check out Disney’s official D23 website for a Q&A that puts this topic to rest.