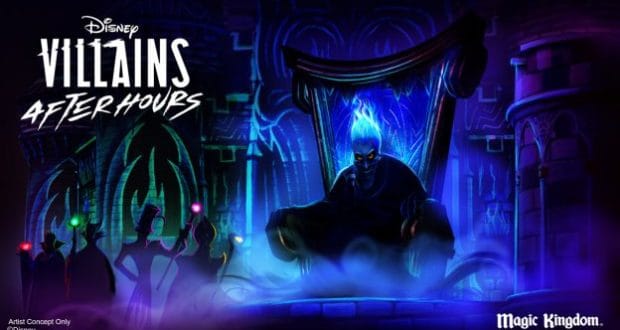 Disney is diversifying the nighttime entertainment options that it makes available to guests.  In addition to the specialty holiday parties at Halloween and Christmas, three of the parks allow guests to take advantage of after hour events that limit the number of guests who can attend, as well as free snacks and access to attractions. In addition to these regular after hour events, Disney has also introduced Villains After Hours.  These events are offered on select nights — here are the five things that you’ll love about this event and two things you won’t!

Similar to the other after hour events offered at Magic Kingdom, Animal Kingdom, and Hollywood Studios, the number of tickets for each even is limited so guests are assured of small crowds and easy access to their favorite attractions.  During our time at the event, we were able to ride our absolute favorites —Thunder Mountain, Splash Mountain, Pirates of the Caribbean, the Peoplemover, and Space Mountain!

Guests needing some snacks during the party won’t be disappointed as they have access to free popcorn, novelty ice cream, as well as soda and water.  The snack carts are well-positioned and stocked so you only need to walk up and ask for what you need and you’re on your way!

Two attractions over special Villains-themed overlays to enhance your enjoyment of the attractions.  At Space Mountain, the usual projections of stars and planets are turned off and riders are hurdled through space in the pitch black!  Additionally, guests will be treated to a special Villains-centric soundtrack.  Over in Adventureland, guests going aboard Pirates of the Caribbean will encounter live actors in the queue and on the attraction — this addition certainly makes spending time in line a little easier to bear!

Admission is set at $129, while Annual Passholders and Disney Vacation Club members qualify for a discount, but the party itself only lasts for three hours, so we don’t feel that guests get their worth out of the party with such a price point, especially if the entire family goes — this party would account for another day or two of regular park tickets.

While the party didn’t begin on the night we visited until 10 PM, we were able to enter the park at 7 PM.  This allowed us to grab some dinner, watch Happily Ever After, as well as check out the offerings of the party before it officially began.  While this doubled the amount of time we could spend in the park, day guests were still in the park, so lines were still quite long for the attractions.

During the party, Maleficent from the Festival of Fantasy Parade makes appearances down the parade route.  Being able to see this marvelously well-themed float breathing fire at night is an amazing sight!

In going with the Villains theme, there is a special stage show featuring some classic Disney Villains – Hades, Dr. Facilier, the Evil Queen, and Maleficent.  Our problem with the show was the unnecessary length of the show (approximately 25 minutes), as well as the lack of a cohesive story line.  We were disappointed that we skipped riding some more attractions to watch the show.  We also would have loved if any of the Villains were available for photos, but unfortunately there were no character interactions! Have you checked out the Villains After Hours event?  Do you plan on going?  What would you most be looking forward to doing while there?