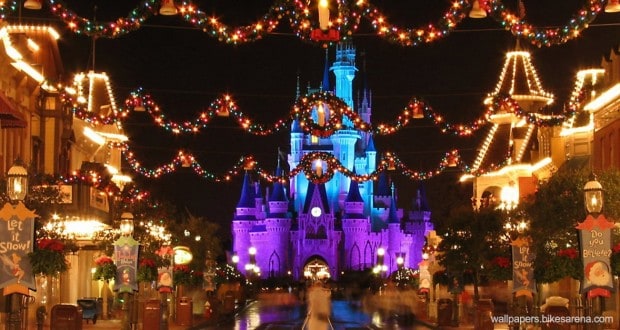 Twas the Christmas season, and all through the Magic Kingdom, people were celebrating a wonderful holiday tradition! This past weekend I attended Mickey’s Very Merry Christmas Party, a separate, hard-ticket event held at Magic Kingdom on select nights throughout November and December. The party runs from 7 PM to midnight and features special character meet and greets, a fireworks display, Mickey’s Once Upon a Christmastime Parade, great gifts, and even free food! There was so much to see and enjoy at the party, but the following is our list of the six best!

6. Free food – as part of admission, guests can enjoy unlimited complimentary hot chocolate and cookies (we were told they were Snickerdoodles, but the amount of cinnamon and sugar varied by location). The best part about the holiday treats is that they were available throughout the park at various locations. It was nice to be able to wander the park and be able to pick up snacks along the way, rather than have to double back to another location. The hot chocolate was definitely needed as temperatures were in the low-50s the night we went!

5. Multitude of character interactions – various characters were on hand to meet with guests. As I was walking around, I saw Snow White and Sleeping Beauty in Fantasyland. I know many more characters were available. I was able to dance the Cotton Eyed Joe with some characters at the Diamond Horseshoe during the Holiday Hootenanny, too! The variety of ways that you could interact with the characters was a vast improvement over the Villains Unleashed event held at Disney’s Hollywood Studios in August.

4. Merchandise – I have quickly developed a habit of grabbing some kind of souvenir from every trip to Disney. Be it a magnet, pin, keychain, or t-shirt, I like having keepsakes from special times at Disney. There were specialty ornaments, t-shirts, trading pins, and a limited edition MagicBand available during the event. Again, in stark contrast to the Villains event, Disney made merchandise available at 5 different locations throughout the park (and appeared to have a good amount of quantity available as well). Villains only afforded guests one location to get merchandise located in a remote corner of DHS.

3. Rides – some people do not attend the parties to be able to ride the rides. I disagree with this approach. Since many people were focused on meeting characters and enjoying the special extras of the party, I was able to enjoy many attractions with little or no wait times (sadly, Disney does not allow you to have FastPass+ for specialty events). Our family was able to walk onto Thunder Mountain and the Jingle Cruise (a special holiday overlay of the Jungle Cruise – our captain, Jerica was AMAZING!). We had less than 5 minute wait for the Haunted Mansion and maybe a 10 minute wait for Space Mountain! I flirted with the idea of riding Splash Mountain alone, but the idea of walking around Magic Kingdom slightly wet with temperatures dancing around 50 was not one I took warmly too!

2. Holiday Wishes – a holiday version of the normal Wishes fireworks was worth the price of admission. This truly spectacular display left every member of our group awe-struck. Videos are bound to exist on YouTube, but I don’t want to spoil any of the surprises of the show. Suffice it to say the entire experience is immersive and Cinderella’s Castle in lights is used as a focal part of the show.

1. Mickey’s Once Upon a Christmastime Parade – I have not been able to stop humming along with the soundtrack to the parade. There were so many different things that I loved about the parade! First, I enjoyed the fact that the parade began in Frontierland, rather than Main Street, U.S.A. I was able to grab a Mickey pretzel and enjoy the parade standing across from the Frontierland Shooting Arcade (where there was almost no crowd until about 2 minutes before start time). Second, the soundtrack is addictive. I have not downloaded it yet, but have gone to YouTube a couple times to re-listen to the entire track since the event. Third, there was a great array of characters in the parade – Pinocchio, Mary Poppins and Bert, Elsa and Anna, Snow White and the Prince, Olaf, Kristoff, Chip and Dale, Wreck-It Ralph, the Seven Dwarfs, Woody and Jessie, Aladdin and Jasmine, Mickey and Minnie, and the most popular of all, Santa Claus. However, the standout for me was the Toy Solider Marching Band. I can’t even adequately describe the awesomeness that they were – they had some amazing costumes, played their instruments, and had some great dance moves!

Even with the cold temperatures, the extra cost of admission, and the crowds (which seemed to be huge at the beginning and the end of the evening, but once in the park, did not seem bad at all), this was a fantastic event and I highly recommend it. Even before leaving the party, I said to the other members of my group that we definitely need to come back next year (and to try Mickey’s Not So Scary Halloween Party)! Have you been? What is your favorite part of the party? Or the part that you are most looking forward to?

– Disney For the Holidays! – What You Need to Know to Plan a Holiday Trip!