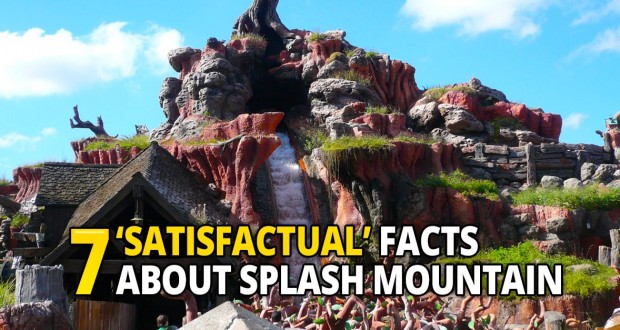 The crown of Frontierland, Splash Mountain is a refreshing mix of excitement and classic ride-through storytelling. We all know the view at the summit is breath-taking but here are some little known but satisfactual facts about the Magic Kingdom’s thrilling water ride.

7. Splash Mountain is inspired by the controversial movie, “Song of the South.” Interestingly, as with almost all Disney animated classics, this story finds much of its origin in a popular series created by Joel Chandler Harris called Uncle Remus’ Tales. Harris compiled the stories he had heard in the oral tradition of African American folklore and wanted to make sure they were part of the literary record for all to enjoy. The controversy stems from the portrayal of Uncle Remus, a former slave in the south, as he tells these folk legends of Br’er Rabbit, Br’er Fox and Br’er Bear (among many other creative and scandalous characters). Many are divided on Harris’ and eventually Disney’s treatment of the stories and perceived derogatory characterization of African-American heritage. The deeper lessons found in the adventures of Br’er Rabbit have impacted American culture since their publication in the late 1880s. This is likely what drew Walt Disney to bring these stories to life through the linking of his innovative live-action and animated sequences.

6. The attraction features three catchy songs and includes a fourth you may have missed. Inside you’ll hear “How Do You Do?” a calming track to ease you into this land of talking critters. “Everybody’s Got a Laughing Place” almost makes you forget that an ominous drop imminently awaits you. The creepy “Burrow’s Lament” (the darker version of the “Laughing Place” tune) remedies that on the long, suspenseful ascent, setting the tone perfectly before your watery descent. Finally, the celebrational anthem “Zip-a-Dee-Doo-Dah” is sung as you victoriously arrive back home safe and sound (and wet) with Br’er Rabbit. This familiar tune won Best Original Song at the 20th Annual Academy Awards in 1948 and has been used in several Disney settings through the years. You’ll easily find yourself humming or whistling the catchier tunes upon exiting as you explore Frontierland and beyond!

5. The log flume turns into a roller coaster during the ride. In order to accomplish the 52 foot (5 story) climactic drop, the free floating flume transitions to a roller-coaster track during the cavernous Laughing Place scene so you can be pulled up the mountain cave. You’ll notice during this transition that it’s the only time you find yourself not in the water (the ascent being the only exception). Because it’s dark and happens suddenly, you probably don’t realize the switch but watch for it next time! After the free fall, you once again float through the final scenes until you disembark.

4. The log flumes once had no restraints. I remember the days of my youth, riding this ride solely for the enjoyment of the dark-ride scenes of the Br’er characters. The trepidation at the eventual drop always grew as we would near the final climb and I would clutch the seat rail as if my life depended upon it… for in some ways, it did! As the years went on, however, this all changed of course. I would merely tolerate the story scenes so I could feel the exhilaration of weightlessness when dropping at a 45-degree angle, reaching speeds of 40 mph during the briar patch plunge. You would literally rise from the seat if your arms were raised. But that eventually changed too when lap bar restraints were added for extra safety measures in 2011. They were mainly installed to keep riders from exiting prematurely, an issue that led to someone’s death in 2000.

3. Inappropriate behavior during the drop won’t be viewable after the ride. Cast members have the responsibility of previewing every single picture that’s captured during each flume’s fall and subsequently trashing those that don’t meet Disney family standards. This obviously includes lewd behavior (keep those shirts on ya’ll) and offensive hand signs. However, it also includes any kiss that’s not on the cheek or hand. Please keep that in mind or your whole flume log will miss out on the opportunity to view and purchase an iconic photo.

2. You are guaranteed to get wet. There are signs posted that you may get wet. I believe it’s more of a promise as the ride employs 950,000 gallons of water to make this mountain splash. There is ample opportunity for liquid refreshment during the 3 varying levels of dips and the briar patch drop at the climax, not to mention the random propulsion of water as you float beside the outdoor patch towards the beginning. Generally, the closer you are to the front, the wetter you’ll be after disembarking. I also encourage those who are averse to extra soakage to sit on the left side of the flume, as you are almost sure to stop next to a waterfall (on the right) near the ride’s end. No one escapes the high powered fans as you await the exit, which heightens your awareness of being wet and suddenly cold. You could always wear a poncho on the ride, but that’s kind of missing the point isn’t it?

1. Disneyland was the first to install Splash Mountain. I know this because I watched the 1989 special that allowed Jim Varney’s Ernest P. Worrell (from the “Ernest Goes to Camp” and “Ernest Saves Christmas” movies) an exclusive ride-through in “Ernest Goes to Splash Mountain.” When the Magic Kingdom added this to Frontierland in 1992, I was ecstatic (Tokyo Disneyland also opened a version in 1992). The original version in California employed characters from the deceased attraction, “America Sings,” such as the singing hen, the three long bill birds, and the vultures to name a few. Splash Mountain features over 100 critters spread throughout the ride to convince you ‘it’s a wonderful day, plenty of sunshine heading your way.’ You just have to get through the splash part first!