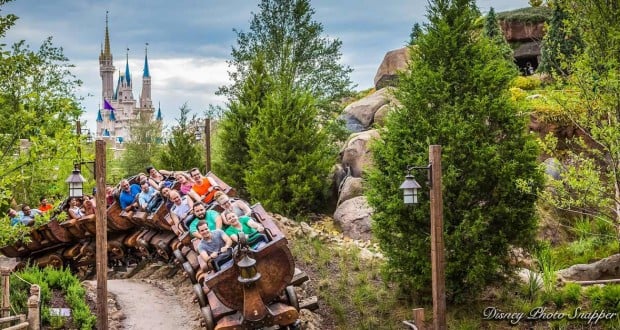 8 Amazing Facts about the Seven Dwarfs Mine Train

It seems every year there is an attraction scheduled to open that gets the entire Disney universe into a tizzy. 2014 was no different as the highly anticipated Seven Dwarfs Mine Train debuted as the final piece to the Fantasyland puzzle. The attention to detail taken by the Imagineers is exactly what you’d expect from a project of this size and magnitude. With interactive games in the riders queue, holograms and animatronics surrounding guests while on the ride, and of course some dips, drops, and turns along the way make this family coaster worth the wait it took to construct. Let’s take a look at some of the ideas that only Disney could come up with to make this attraction one of a kind.

8. What a Gem – To help relieve the monotony of waiting in line, Imagineers put together a jewel sorting station for guests that is over fifteen feet long! This interactive “game” allows riders to sort holographic gems by color and shape into different trays. Not only is this a great way to pass the time it is a great learning tool for kids.

7. Musical Animals – Everyone is familiar with the musical melody from Snow White and the Seven Dwarfs right? Imagineers put together 12 wooden spigots (which represent the animals whom the Dwarfs befriend in the film) while in the riders waiting queue. Each of these spigots represent a note in the chromatic scale and when put together will play the melody from the storied 1937 film.

6. The Zipper – I’m sure we’ve all ridden “The Zipper” at our local fair or carnival at one time or another. The cart you ride in tilts and tips in certain directions. While the Seven Dwarfs Mine Train doesn’t tip riders upside down, it does in fact simulate swaying and tipping that a passenger in a mine train would feel. It is just another step the Imagineers took to enhance the guest experience.

5. The Vault Key – In Walt Disney’s 1937 film, everyone’s fun loving, though sometimes forgetful, dwarf left the key hanging outside of the vault. In an ode to Dopey, the Imagineers recreated this scene in the riders queue. This small level of detail is finite enough that even the most experience Disney enthusiast could miss.

4. General Contractors from 1937 – Building a house is never easy. Recreating a fictional house based purely on a cartoon from 1937 is near impossible. The Imagineers pulled out all the stops when building the Dwarfs cottage. They took the color of the shingles, slope of the roof, paint colors, and even the design of the front steps into account when constructing it.

3. Paint and Design – Not only are no two mine trains alike, but each mine train has been painted and ‘aged’ using techniques developed by Disney Imagineers. The ride cars were painted using multiple layers of thin paint to give it an older look and feel. Builders also took the shape of the grain, color of wood, and even the age of the bolts holding the train together, while constructing each unique cart.

2. Photo and Video – Have you ever wanted to relive an attraction after you’ve experienced it? The Seven Dwarfs Mine Train gives guests that opportunity with both photos AND video memories. If you’ve purchased the Disney Photo Pass, a video recreation along with photos is magically transferred to your account complete with music and highlights from your ride. This was a pleasant surprise the first time I saw it.

1. Recycle – While trekking through the mine, you will notice a few of your favorite dwarfs yodeling and dancing along the way. These characters were actually reused by Walt Disney Imagineers from the old Snow White’s Scary Adventures ride. Worried about how old these would look to park guests? The Imagineers had that covered by making the windows tougher to see into. As always, no stone goes unturned.

With one of the most popular attractions in all of Walt Disney World, guests are flocking by the hundreds each day to ride this family based roller coaster. It is comparable to Big Thunder Mountain, though not as intense. This is some of the finest work done by Disney Imagineers to date, as they used both old and new technology to ensure this will be a timeless attraction for all ages. Fantasyland’s expansion may be highlighted by Beast’s castle, but the Seven Dwarfs Mine Train is a must see attraction for anyone visiting the Magic Kingdom.