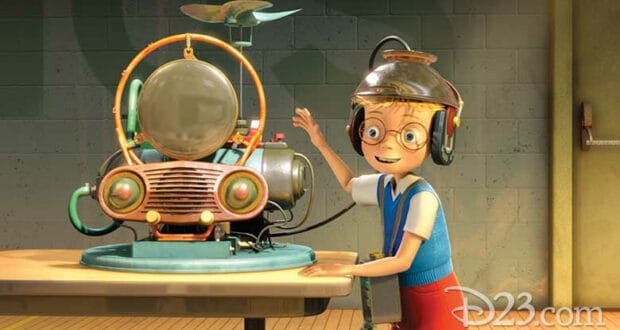 Throughout its history, the Walt Disney Company has presented us with a notable number of onscreen whizzes and inventors. More often than not, they come in the form of zany yet clever characters who often exude brilliant brainpower and potential, all while lacking some of the everyday, arguably more crucial character essentials. From scholarly professors to child prodigies to even that oddball neighbor right next door, we’re taking a look at eight Disney movies that feature brilliant inventors at work in their field, who just might prove motivational to the young aspiring inventors at home watching.

Related: 15 Inventions Walt Disney Missed That We Wish He Could See

Here you have an excellent throwback example to Disney’s famed family-friendly live-action comedies of old. Produced in 1964, this first installment in what ended up becoming a two-film franchise introduces us to our protagonist — Merlin Jones — a college student and genius, to say the least. After he successfully invents a mind-reading helmet, Merlin soon learns of the unscrupulous, criminal intentions of a local judge.

Unable to convince law enforcement of such dastardly plans in the making, and having little public credibility behind his new invention, it is up to Merlin and his girlfriend to take matters into their own hands. This lighthearted comedy stars Tommy Kirk and Annette Funicello and proves that Disney family classics never go out of style. Consider following this one up with its sequel, The Monkey’s Uncle, which came out just a year later and features the same primary players.

Related: Fans of ‘The Swiss Family Robinson’ or ‘Lost’ Will Love This New Adventure

Some years prior to Disney’s Merlin Jones franchise there was this other widely popular series of films featuring actor Tommy Kirk, this time not filling the role of boy intellect. The title brainiac here is appropriately named “Professor Brainard” and is played by none other than acting great Fred MacMurray. As a reputed educator of physical chemistry at Medfield College, Professor Ned Brainard has a reputation for having a brilliant mind where science is concerned but comes up short in remembering the everyday essentials of life, including his own wedding day!

But when he invents a new, highly energetic substance, which we eventually come to know as “flubber,” it is a literal game changer on a number of different levels—from helping an underdog basketball team to victory and even presenting some lucrative potential for governmental/military use! The success of this film was followed up with the sequel Son of Flubber, which came out in 1963. It’s also worth noting that the fictional setting of Medfield College was used as the location for later Disney science fiction films as well, including the Dexter Riley trilogy that starred Kurt Russell.

Disney rebooted Professor Brainard’s story a bit with a couple of notable differences in the film Flubber, which came out in 1997. Starring funny man Robin Williams as the brilliant but forgetful protagonist, this movie delivers on a modern retelling of the story behind how flubber was invented, all while demonstrating for viewers the humorous mishaps and powerful potential for its initial success.

Other than a couple of the characters referenced in the title, there is nothing small about this blockbuster hit from 1989, which established a cult-classic following and even inspired various attractions at Disney Parks. As the familiar story goes, an inventor and family man named Wayne Szalinski, played by Rick Moranis, accidentally ends up shrinking both his children (along with two neighborhood kids) with an invention he came up with.

The film revolves largely around the adventures of the “little ones” and the ongoing search to remedy the problem at hand by utilizing a reversal of sorts. What worked as a solution in the first film, though, opens up a whole new can of worms with the follow-up sequel in 1992 — Honey I Blew Up The Kid. In this story arc, the Szalinskis’ toddler finds himself in the opposite predicament of what his older siblings faced.  The third installment from 1997, Honey We Shrunk Ourselves, revisits little inconveniences with the parents now facing tiny misadventures.

Related: These Are the Most Entertaining Non-Character Dining Experiences to Have at Walt Disney World Resort

This is a classic Disney example of adapting a well-known story — in this case, the famed novel of the same name by Jules Verne from 1872 — into an original onscreen family film. Despite the noted differences between the film and its preceding novel, many of the original characters and events remain intact as far as important plot elements are concerned. This is especially true in the portrayal of the story’s primary protagonist — Phileas Fogg.

As a punctual, brilliant-minded inventor, with a well-orchestrated life that functions like clockwork, we get to embark with him and his comedic companion (played by Jackie Chan) on a very out-of-the-box endeavor to travel the world in 80 days at a time in history when doing so was no easy task. The challenge is to keep his reputation for timeliness intact and remain constant while breaking his routine in an innovative and comedic way. It’s almost like a way to cheer on the uptight nature of a character who, despite his rigidness, is a likable fellow all the same!

This computer-animated film from 2007 is a very motivational and inspiring work on many levels. The story follows a brilliant orphaned boy who sets out to invent a memory machine in order to tap into forgotten, stored-away memories. His objective is to unlock memories of his birth mother. While the task at hand seems simple enough (at least from the perspective of a whiz kid), a whole slew of other issues come into play, largely dealing with time travel and a quest to prevent some adverse alterations to the whole time-space continuum. For an animated production, this is one Disney production that really goes deep in bringing forth a family-friendly viewing pleasure.

This may be a tale as old as time, but even the most adamant Disney fans find themselves pausing a moment when considering this recommendation for motivating young inventors. Then we remember the fact that the character Maurice — Belle’s father — is in fact an inventor. The original animated version from 1991 demonstrates this most of all, while admittedly portraying him as a bit of a lovable misfit of sorts.

The live-action remake, while still showing Maurice as an inventor to an extent, plays more on his artistic mind and gives him more credibility as a serious, doting father. This version also really pushes the idea of Belle being more of the inventor in the family — a perfect compilation to go with her already-established book smarts.

Tony Stark, better known as “Iron Man,” is one of the most favored heroic characters in the Marvel Universe. So, it goes without saying that watching the first installment of Iron Man from 2008, along with all its follow-up sequels and interconnected Avenger works, makes for another great way to celebrate inventor ingenuity at its finest! Actor Robert Downey, Jr. brings the role to life in portraying the brilliant title billionaire, who is kidnapped and forced to use his brains for the creation of a devastating weapon. Instead, he skillfully crafts the ultimate high-tech suit in order to escape his captors. This results in his establishing a new identity for himself along the way — that of “Iron Man.”

In addition to all these, Disney has produced a wide range of other films that feature inventors and other brainy characters in leading roles. Several Disney Channel Originals have also had fun with such ideas time and again, with some honorable mentions being How to Build a Better Boy, Invisible Sister, Genius, and many others. The Disney Company as a whole is all about celebrating innovation through imagination. And using different platforms in entertainment and movies is one of the easiest ways to access the ongoing magic they just keep reinventing!