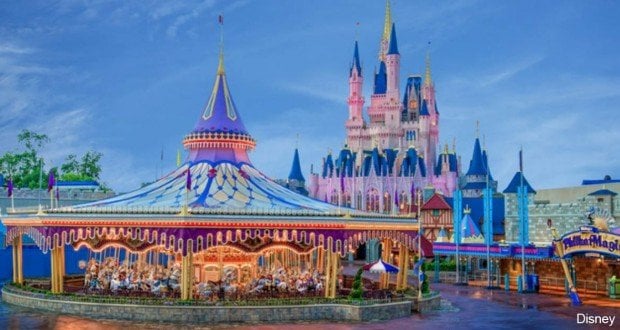 As you stroll through the archway of Cinderella Castle and enter New Fantasyland at the Magic Kingdom, your attention will immediately be drawn to the spinning grand carousel known as Prince Charming Regal Carrousel. This delightfully classic mainstay has stood the test of time and provided an added whimsy that truly highlights what this spectacular Land is all about. Young or old, this simple yet elaborately detailed attraction with its colorful regal steeds and jaunty rhythms of classic Disney melodies played by an old-fashioned organ will bring a smile to your face as you take a spin, catching quick and whirling glimpses of all the wondrous sights of New Fantasyland along the way. Saddle up and journey with us as we count down 8 sensational facts about this wonderful Disney attraction.

The Magic Kingdom carousel was originally built in 1917 by The Philadelphia Toboggan Co., an incredibly prestigious company that manufactured amusement park staples such as wooden roller coasters, toboggans (roller coaster cars) and, of course, carousels. It is one of the largest of its kind in the world, measuring 60-feet in diameter. This carousel has moved quite a bit since its creation, originally being built for the long-gone Detroit Palace Garden Park and then moving to the now defunct Olympic Park in Maplewood, New Jersey. In 1967, Disney Imagineers purchased the handmade carousel known as “Liberty” from Olympic Park and performed extensive renovations before introducing it to the Magic Kingdom as Cinderella’s Golden Carrousel in 1971.

During the installation in 1971 at the Magic Kingdom, Roy O. Disney—possessing the same focused precision and determined exactitude of his brother Walt—noticed that the carousel was slightly off-center from the Cinderella Castle breezeway and needed to be realigned. It was moved 8-inches to its present-standing position.

If you haven’t already noticed, the official moniker contains two “R’s,” having some wonder exactly which version of “carousel” is the correct spelling of the word. They both are actually, as the word “carousel” comes from the French word “carrousel” (originally from the 12th century Spanish “carosello” and Italian “garosello”) and can be used interchangeably. Consider the words “theater” and “theatre,” both correctly spelled. The fact is Disney uses both versions of the spelling throughout their theme parks all over the world. There is King Triton’s Carousel at California Adventure, Cinderella Carousel in Hong Kong Disneyland, and The Carousel of Progress inside Magic Kingdom, all using the one “R” version in their monikers.

5. A New Name and a New Backstory

In June of 2010, keeping with the New Fantasyland renovations and to better fit the plans of this reimagined Land, Disney officially changed the name of this attraction and gave it a unique backstory for the first time. Cinderella’s Golden Carrousel became Prince Charming Regal Carrousel and was accompanied with this tale:

“Following their fairy-tale romance and happily-ever-after wedding, Cinderella and Prince Charming took up residence in Cinderella’s Castle. With peace throughout the kingdom, Prince Charming had time to practice for jousting tournaments. In the countryside near the castle, he built a training device of carved horses, on which he could practice the art of ring-spearing, a tournament event in which a knight rides his horse full speed, lance in hand, toward a small ring hanging from a tree limb, with the object of spearing the ring. This event was known by various names throughout the lands, but generally came to be called ‘carrousel.’

The carrousel device drew the attention of the villagers, who wanted to take a turn on this amazing spinning contraption. So Prince Charming had a second carrousel constructed closer to the Castle, where everyone could take a spin on this wondrous invention. Instead of a working knight’s training device, however, this new carrousel is more befitting its regal location in the Castle Courtyard – its rustic training horses replaced with ornately decorated prancing steeds adorned with golden helmets and shields, flower garlands, feathers and other festoons. Prince Charming invites one and all to test their horsemanship skills and to enjoy their own happy ending.”

Rumors abound that Cinderella’s own horse is found amongst the 90 hand-carved steeds. The horse in question, “Cindy,” has a golden bow tied to the tail and is the only horse to sport a tail-ribbon. You can find this horse in the second rank of horses. There has never been any official confirmation on this by Disney Parks, and at least two high-ranking Disney officials have stated that if Cinderella’s horse was to be included in this line-up it would never be found in the inner-row of horses and would be far more elaborately and ornately decorated (presumably with some sort of royal crest to boot). There is also no mention of Cinderella’s horse in the newly created backstory either. Some believe that this Disney myth was perpetuated by Cast Members trying to spread a little extra magic to guests. Regardless, it is still fun to seek out the unique golden bow tailed-horse amongst all the others.

The next time you find yourself parading up and down atop these glorious steeds, glance above to the wooden canopy lining the carousel. You will notice 18 hand-painted artwork depicting memorable scenes from the animated Disney classic, Cinderella.

The Disney Imagineers went to great lengths to have the Magic Kingdom’s carousel stand apart from all other carousels in the world. That gold you see decorating the horses is real, made of 23-karat gold leaf. Gold leaf is an extremely thin layer of pure gold used by crafters to create a gilded appearance. In addition, real silver and bronze adorns these horses. Also sparkling and gleaming are the over 2,300 shimmering lights that glow amidst this attraction at night.

When Disney purchased the carousel from Olympic Park it took considerable effort and time to restore and recraft these steeds. Disney made it so that each of these expertly-crafted horses is unique—no two horses are alike. There is also tremendous energy put forth into keeping these beauties in the great condition they are in. Hours of manpower are put into cleaning the horses and buffering the brass poles when park guests are gone. And if you have ever wondered why, after all the years of continuous use, the horses look so pristine it is because they are regularly being swapped out. “Spare” horses are always being maintained behind the scenes as they go through a refinishing and repainting process. This ongoing cycle has horses removed from the carousel for their turn in the shop and replaced by freshly refinished steeds. Sources say it takes about two years for all the horses to be completely repainted, and the cycle starts all over again.

– 7 Awesome Facts About The Haunted Mansion At Magic Kingdom